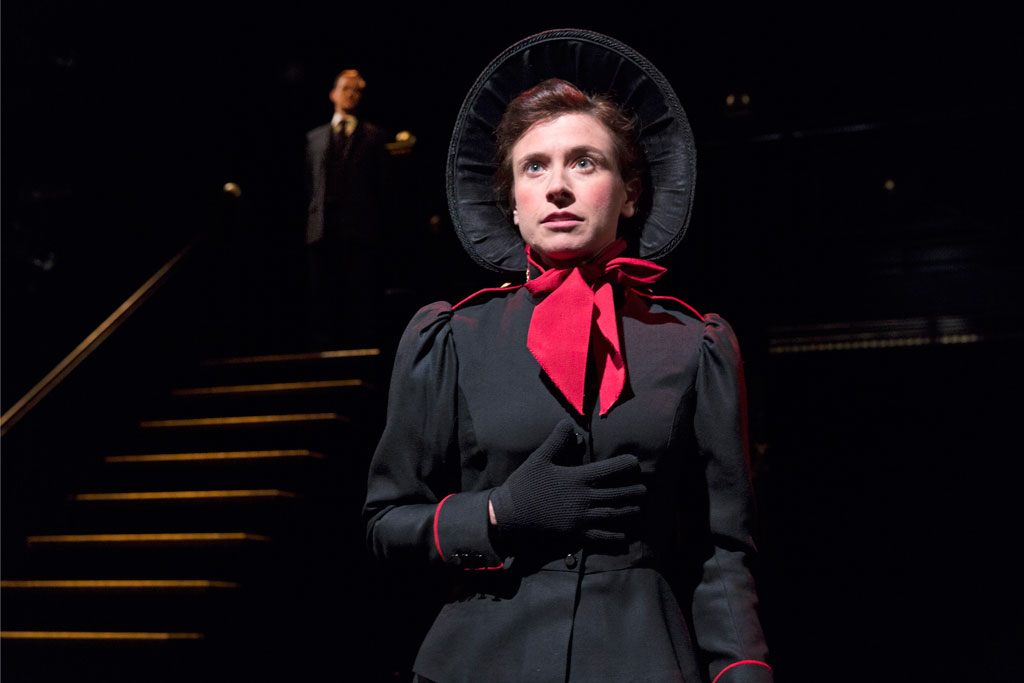 Hannah Cabell plays Barbara Undershaft, a major in the Salvation Army and ready to help the unfortunates of the world, in George Bernard Shaw’s “Major Barbara.” (Richard Termine)
Arts & Culture

Soul-saving is not easy
BY Diana Barth TIMENovember 18, 2014 PRINT

NEW YORK—The major of the title is actually Barbara Undershaft (Hannah Cabell), daughter of powerful munitions magnate Andrew Undershaft (Dan Daily). Barbara’s great goal in life is to save souls and to offer comfort to the unfortunates of the world. Thus, having been appointed to the rank of major in the Salvation Army, she hopes to achieve her goal.

Mr. Undershaft, however, scorns his daughter’s mission. For him, money and power enable people to achieve the luxuries of a pleasant life and, in fact, will give them more time to attend to their spiritual interests.

One might also say that Undershaft is quite democratic in the way he runs his business. He cares not at all what side he may be supporting; he will sell arms to the highest bidder.

On the home front, although Undershaft is separated from his wife, Lady Britomart Undershaft (Carol Schultz), she has arranged a family meeting to ensure that their son, Stephen (Alec Shaw), is taken care of financially.

Also on hand are Charles Lomax (Cary Donaldson), who is engaged to Barbara’s sister, Sarah (Becky Baumwoll), and Adolphus Cusins (Richard Gallagher), a Greek scholar and fiance of Barbara.

Not to be overlooked are the indomitable but discreet butler Morrison (Bradford Cover) and Lady Britomart’s maid (Robin Leslie Brown).

The crux of the play turns on a wager Undershaft has made with Barbara to decide which of them is more effective in redeeming people’s souls. He will visit her shelter if she will visit his cannon factory.

He points out that the Salvation Army merely feeds people in the here and now, letting them continue to live in wretched housing and only dream of a heaven to come. His work, however, enables him to create a comfortable town in which the deprived can live now and have the ease and security to pursue religious or spiritual activities.

Undershaft further points out that Barbara’s mission depends upon donations from companies such as whiskey distillers, the kind of people she has been fighting. Going ever further, Barbara’s father tries to “convert” her so that she leaves the Salvation Army and becomes the saver of souls to his comfortably well-off workers, who have the leisure to involve themselves in religious pursuits. He even offers to train her fiance to become his, Undershaft’s, successor.

The play has been astutely directed by David Staller. He is also artistic director of Gingold Theatrical Group, which has co-produced the production with The Pearl Theatre Company. According to program notes, Gingold is “dedicated to presenting plays about Human Rights using the work of George Bernard Shaw as their guide.”

Performances are top-notch. (It’s interesting to note that all are double- or triple-cast except for Cabell, Gallagher, and Daily.)

Particularly outstanding is Hannah Cabell as Major Barbara, whose intense, serious demeanor as well as her strong, commanding voice lend depth to the production; Dan Daily’s Andrew Undershaft is so compelling that one is tempted to embrace his views.

Bear in mind that the play, generally considered a comedy, was written and set in 1905, only nine years before the world was engulfed in the war that was “to end all wars.”

I can’t end without mentioning the vivid set by James Noone, all in black and gold with a black-mirrored floor, enhanced by lovely period costumes designed by Tracy Christensen.