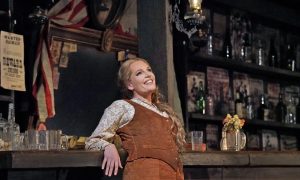 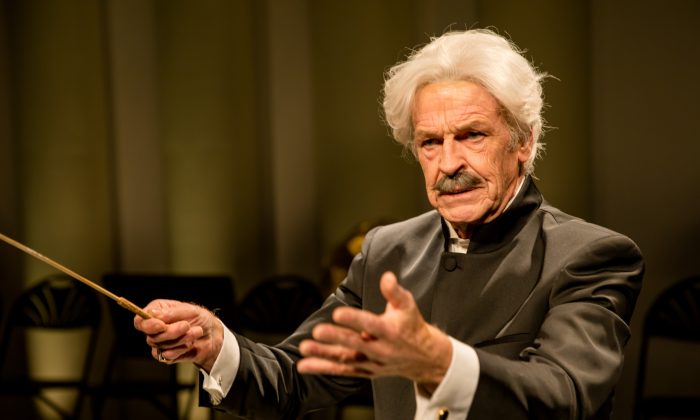 John Noble as Arturo Toscanini in the Ensemble for the Romantic Century production of “Maestro.” (Shirin Tinati)
Performing Arts

A Musician for the Ages
By Diana Barth
biggersmaller
Print

NEW YORK—Legendary Italian orchestra conductor Arturo Toscanini (1867–1957) was arguably one of the most seminal figures in 20th-century music. He was noted not only for his consummate knowledge of music and for his extraordinary skills of interpretation, but also for his fierce temperament and impatience with any playing but the highest quality.

Orchestra members put up with his displays of temper because they knew these outbursts were supported by Toscanini’s love of the music and his native perfectionism and personal integrity.

In this production of “Maestro,” writer Eve Wolf has set herself the task of creating a picture of the great conductor via letters, memoirs, and literature.

The production is one of a series of efforts by Wolf, herself a professional pianist, as part of the Ensemble for the Romantic Century’s offerings, all dramatically interwoven with musical performance. In the past, these featured works on such notables as poets Emily Dickinson and Anna Akhmatova, and composer Ludwig van Beethoven.

It’s difficult to portray a conductor satisfactorily, as much depends on his personal charisma. Here, however, actor John Noble acquits himself admirably, with his tall, elegant stature and imposing voice.

Much of the content is taken up with passionate letters to his mistress, Ada Mainardi. The couple, each married to someone else, could not often meet, and Toscanini, who held strong antifascist views, had fled Italy in the face of Mussolini’s fascism.

The production features some back projections of that dictator’s activities, as well as some of Hitler, apparently taken from newsreels, courtesy of projection designer David Bengali.

A large part of the production features musical performances actually conducted by Toscanini, in the form of recordings. Movingly, there were also excellent live performances by a remarkable quintet of players. These included violinists Mari Lee and Henry Wang, violist Matthew Cohen, cellist Ari Evan, and pianist Zhenni Li. There was also an unexpected and delightful trumpet solo, by Maximilian Morel, of George Gershwin’s “Rhapsody in Blue,” arranged by Morel himself.

There were several selections from Giuseppe Verdi’s “Aida,” an opera of which Toscanini was particularly fond. The excerpt “O terra addio” from that opera must have struck a particular chord ( no pun intended), as it deals with exile from one’s homeland.

Other musical excerpts were taken from Richard Wagner, Ottorino Respighi, and Mario Castelnuovo-Tedesco.

One flaw that might be found in the offering is that there was no specific connection brought out between the choice of musical excerpts and the textual content of the show. Also, the music appeared to take up more time than did the actual text. The music was played beautifully, but a few patrons remarked that they had not expected so much of a concert.

The entire production is in the capable directorial hands of Donald T. Sanders.

Not to be overlooked are the recorded passages by actor Paul Sorvino playing major historical figures of the time.

“Maestro” is indeed a music-lovers delight, and there’s enough on the great maestro himself to make a visit well worthwhile.

Diana Barth writes for various theatrical publications, including New Millennium. She may be contacted at DiaBarth99@gmail.com