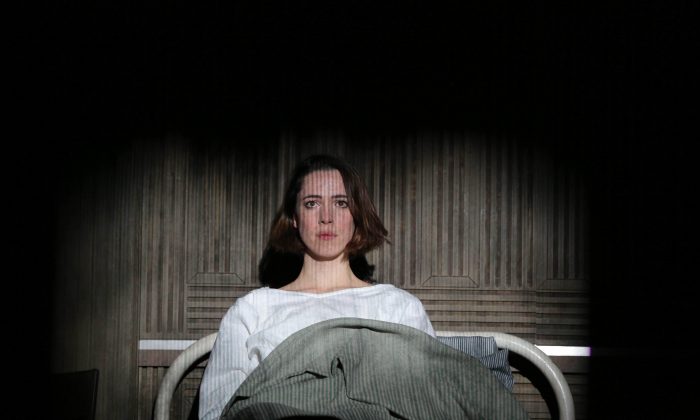 Rebecca Hall stars in the early feminist drama “Machinal” in which Young Woman feels completely alienated from society and from the roles she is expected to play. (Joan Marcus)
Arts & Culture

NEW YORK—Not seen on Broadway since its debut in 1928, Sophie Treadwell’s Machinal still has the power to shock and to inform.

Based on the infamous murder trial of Ruth Snyder, Treadwell, a noted journalist and playwright of the day, has created an expressionistic version of what may have motivated the original culprit.

In the play, the leading character known only as Young Woman (Rebecca Hall), though on one hand seemingly ordinary, is set aside from the crowd by an extreme sensitivity—to noise, to pressures of any kind.

The first scene tellingly shows her on a clattering, vibrating subway train, hemmed in by an impersonal crowd, all dressed alike in dark, somber suits, their faces covered by newspapers. Young Woman, obviously stressed, tries to push her way through and around the uncaring and unyielding passengers.

Next, she appears at work, a typical office. Again, we hear the impersonal and noisy clatter of typewriters, a loud-mouthed switchboard operator, workers yammering out staccato orders. But, one unusual detail concerns Young Woman. Her smug and arrogant boss, played by Michael Cumpsty, seems to be nosing around her.

At home, Young Woman seeks sympathy from her Mother (Suzanne Bertish). Young Woman realizes there’s nothing in the offing for her; she must work to support Mother and herself.

She would love to marry, but not into a loveless marriage, surely. No sympathy on the home front. The cold Mother insists that love has nothing to do with marriage. One must pay the bills.

Gaining no support from any quarter, Young Woman succumbs to the boss’s blandishments. She marries him, although she cringes at the touch of his “fat hands.” On their wedding night, she insists on getting undressed privately, in the bathroom. But he reminds her, possessively, “I’m your Husband.” Period.

In that day, only Husbands had rights.

When Young Woman later gives birth, she is unable to hold or nurse her infant.

Later, she meets another woman in a bar, a free soul (Maria-Christina Oliveras), who gives her ideas. Then our heroine meets a man, referred to only as Lover (Morgan Spector). Now, for the first time in her life, Young Woman experiences pleasure and joy.

But such improper pleasure cannot last. Dark events intrude, and Young Woman finds herself on trial for murder. Murder of the Husband.

The wheels of justice move slowly but inexorably.

In the final, tableau-like scene, Young Woman, now seated in the electric chair, directly faces us, her witnesses—a rapid explosion of light. Then darkness.

English director Lyndsey Turner has done a remarkable job in mounting this production. A never-ending intensity permeates the work. Although the production is dark and somber, it holds one’s interest.

Wisely, the 95-minute presentation is performed without an intermission.

Rebecca Hall’s own intensity and vulnerability effectively fulfill the intention of Treadwell’s play. That Hall is tall and willowy adds to the contrast between her character and that of the other more ordinary types.

The skills of the design team—Es Devlin (sets), Michael Krass (costumes), Jane Cox (lighting), and Matt Tierney (sound)—have been beautifully coordinated. The end result is a unique and moving production.