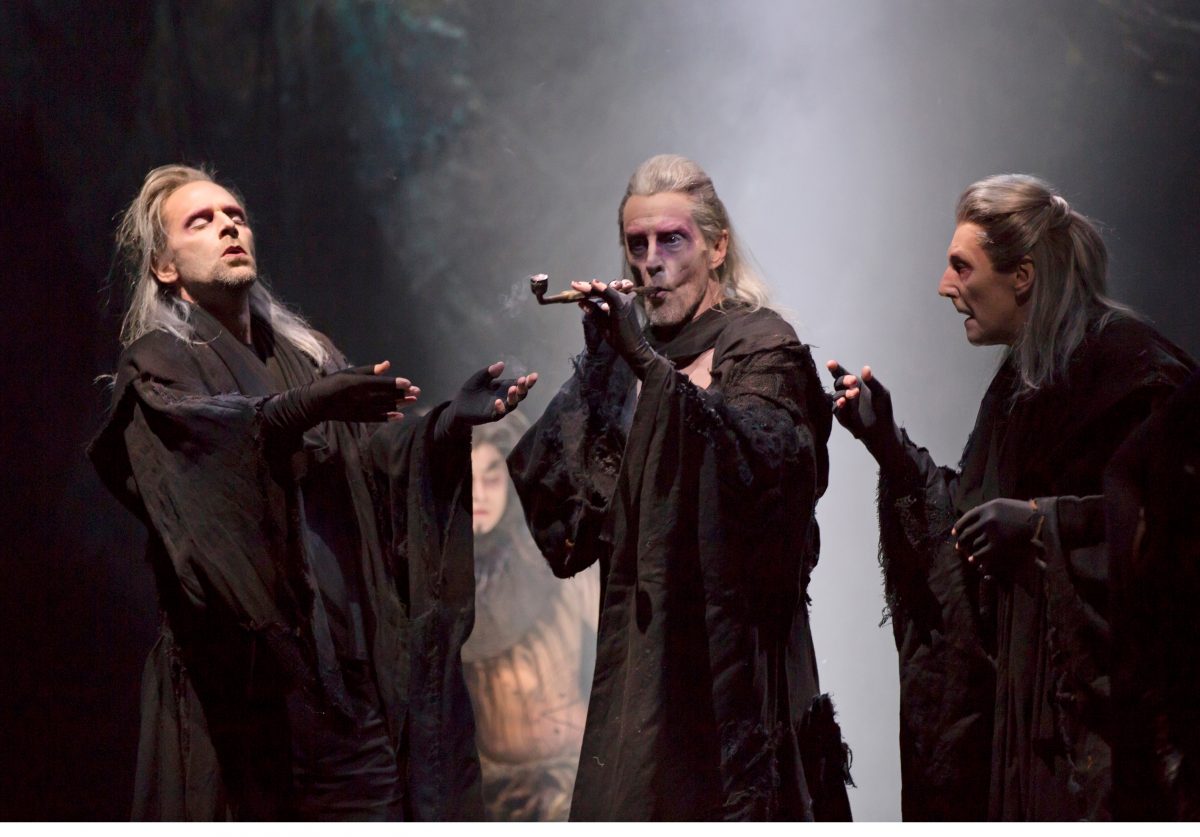 NEW YORK—The acting in director Jack O’Brien’s production of Shakespeare’s Macbeth is overshadowed by the integration of the remarkable production elements, namely, the sets of Scott Pask, lighting by Japhy Weideman, and original music and sound by Mark Bennett.
Costumes, both elegant and ragged, by Catherine Zuber meld effectively with the foregoing.

The set is breathtaking, with sharp-edged, ceiling-high walls drenched in semidarkness and ominous music foretelling only the darkest of deeds. When those castle walls part just slightly enough to permit entrance to some new participants, the viewer experiences unmistakable foreboding.

It would take a pretty strong cast to “fill the shoes,” so to speak, of the aforementioned elements, but unfortunately there is inconsistency in the performances.

Ethan Hawke in the title role has some good moments, but he has an almost apologetic manner in his approach; he lacks the blind ruthlessness of a man who will do anything, commit murder upon murder, to achieve his ends.

Hawke does, oddly, “come alive” in the final battle scenes, just as he is about to receive retribution. (Fight scenes, incidentally, are well staged by fight director Steve Rankin.)

Director O’Brien’s concept appears to favor the role of the three witches—here played most effectively by three men who enthusiastically relish their wickedness and power over mere mortals: Byron Jennings, John Glover (who triples as a Porter and a Murderer), and Malcolm Gets.

The witches, in turn, are controlled by Hecate (a vivid Francesca Faridany), who takes stage whenever she is present—which, though entertaining, momentarily throws the focus of the play off balance.

There is a strong Lady Macbeth in the person of London-based actress Anne-Marie Duff, who though slight of build, wears her spare gowns nicely and favors us with a good use of theater speech, not affected, but clear.

Brian d’Arcy James presents a fine Banquo, his skills as a singer in many prior shows undoubtedly lending effectiveness to his spoken delivery here.

The always dependable Richard Easton does a fine turn as the early-to-be-dispatched Duncan.

Returning to Ethan Hawke, I should mention he is a serious actor, always searching for roles that will stretch him, not settling for easy, pedestrian choices, making films, but always returning to the theater.

Hawke has played Shakespeare, Chekhov, Tennessee Williams, and a few seasons back did The Coast of Utopia at Lincoln Center for which he received a Tony nomination. Perhaps a more substantial Macbeth lies in his future.

As for the production, one can thoroughly enjoy the backdrop for this most violent and vivid of Shakespeare’s psychological studies and theatrical presentations, played on one of New York’s most attractive and expansive stages.