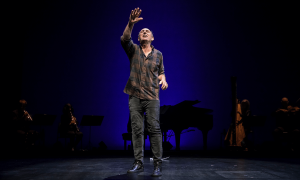 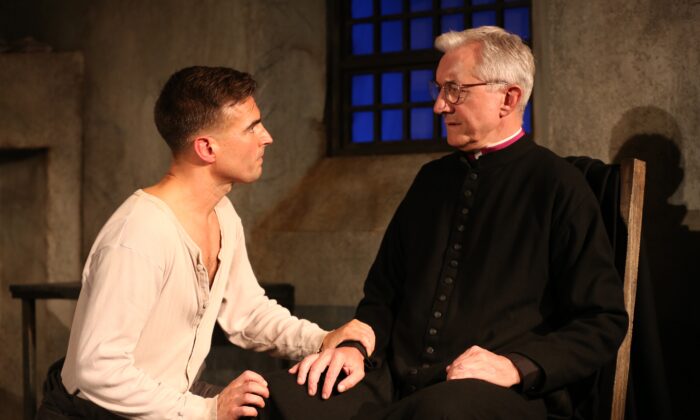 A debate on morality
By Diana Barth

NEW YORK—Playwright Robin Glendinning was inspired to write the provocative “Kingfishers Catch Fire” by a visit a few years ago to the Ardeatine Caves in Italy, where a terrible incident had taken place in World War II.

A Nazi lieutenant colonel, Herbert Kappler had been in charge of a massacre of 335 Italian men, in reprisal for the killing of some German soldiers, in Rome. He had received a life sentence for his participation in crimes against humanity.

The playwright has imagined conversations that may have taken place after the war between actual people: Kappler (Haskell King) and Monsignor Hugh O’Flaherty (Sean Gormley) in Kappler’s prison cell in a sixth-century castle in the city of Gaeta on Italy’s western coast. The play’s title comes from a poem by Gerard Manley Hopkins.

The monsignor, uninvited, starts to question Kappler about his comfort in the prison: Is he being treated well, getting enough exercise, and so on? The cynical Kappler gives terse answers. The two men had known each other briefly during the war, when Kappler, who was head of the Gestapo in Rome, had given orders to assassinate O’Flaherty for his activities in helping enemies of the Third Reich flee to freedom. Of course, Kappler was unsuccessful.

It is a cat-and-mouse encounter, with each man putting forth his own moral concepts, his views of the world, and of how people should behave.

Kappler accuses the monsignor of trying to capture his soul, to convert him to Christianity. The monsignor denies this. But Kappler goes on to present his view of things. If religion were such a great thing, how could such terrible acts as war and atrocities be permitted? Monsignor has no answer.

The second act builds to the nitty-gritty of the discussions. What actually happened at the caves? The details are painful to relate, and as painful to listen to.

Kappler insists he did the deed—that is, take charge of rounding up 335 potential victims—against his own personal feelings. When the monsignor pleads “Why didn’t you stop?” Kappler replies: “I had to keep going until it was finished.”

There is so much of this throughout history: ordinary men simply following orders. Surely, this is more dreadful than assuming that only monsters commit these monstrous deeds.

As the play is all talk with not much cause for action, it is a tribute to the two excellent actors and to director Kent Paul’s extremely subtle and sensitive direction that the production never fails to hold one’s interest.

Haskell King, especially, in a section where he insists he is not entirely to blame, has such a strong sense of actor’s truth that he is mesmerizing. I would have wanted a more consistent German accent, but that is a minor quibble weighed against his overall performance.

Sean Gormley is the perfect picture of a monsignor, with brogue to match.

The production is a thoughtful, compelling theatrical entity in its world premiere.