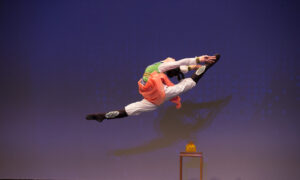 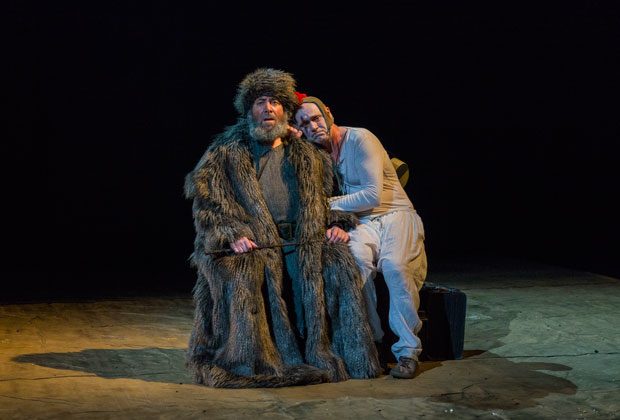 The role of Lear is considered to be the Mount Everest for older actors, and here, Antony Sher scales its heights. It is a thoughtful, intelligent portrayal, and remarkably clear. In fact, the entire production, under the skilled hands of director Gregory Doran, is consistently clear, a claim that can’t be made for many productions.

At times one would wish for more emotion. However, this production does supply details that are gratifying. For example, in the opening scene, wherein Lear’s three daughters are about to be granted the divide of Lear’s kingdom, after an entrance replete with pomp and splendor, an enormous black disc high above the retinue (set and costume design by Niki Turner; augmented by Tim Mitchell’s lighting design) helps create an air of mystery and a fusion of sophistication and primitiveness.

Lear has decided that he is of an age where he can safely turn over his lands to his daughters, Goneril the eldest (Nia Gwynne), middle daughter Regan (Kelly Williams), and the youngest and Lear’s favorite, Cordelia (Mimi Ndiweni).Director Doran has chosen to have the daughters face front, toward the audience, as they utter their professions of love to their father.

The first two claim that they “love their father all.” But the youngest, Cordelia, counters to the effect that how then can they have husbands,” which she has not. Further, she refuses to commit herself to the fullest degree of love for her father but rather to what is suitable.

Thus the ball is set rolling toward ultimate disaster.

In visits to Goneril and Regan, Lear is ruthlessly rejected, leading to a scene where he and his fool (Graham Turner) are perched, alone in the wilderness, in a blazing storm. Here set designer Niki Turner has placed the two in a Plexiglas box as if to demonstrate their absolute isolation.

There are political machinations, wars, and Lear’s closest friend, Gloucester (David Troughton), has his eyes put out by Regan’s husband (James Clyde). Gloucester’s illegitimate son Edmund (Paapa Essiedu in a ruthless, blistering performance) takes his revenge against perceived wrongs by deceiving as many people as he can.

In the end, many suffer by Lear’s foolishness. The Fool, innocent of his insightfulness, cynically remarks that Lear should not have become old before he was wise.

The production is masterfully efficient. Entrances and exits are smoothly and swiftly done; there’s not a moment of blank space. And one leaves the performance having a remarkably solid idea of what the story of King Lear is all about, and why interest in the tale has persisted for hundreds of years, compelling to audiences of all nations.

Diana Barth writes for various arts publications, including the New Millennium. She may be contacted at diabarth99@gmail.com