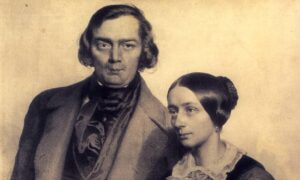 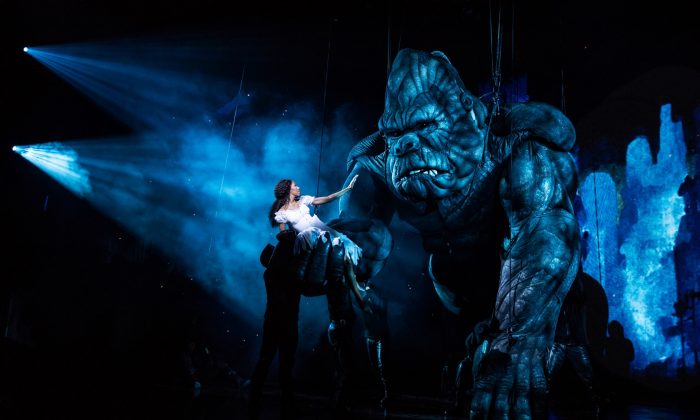 The 20-foot high, 2,000 pound animatronic King Kong is definitely the star of the show; Christiani Pitts plays a character who doesn’t quite live out her beliefs. (Matthew Murphy)
Performing Arts

NEW YORK—A monster has arrived on The Great White Way in the form of the title character in the new Broadway musical “King Kong.” The 20-foot-high, 2,000-pound animatronics wonder is an awesome sight to behold. Be it battling a giant serpent, running amok in 1931 New York City, or climbing to the top of the not-yet-finished Empire State Building, the effects are akin to a gigantic thrill ride. But the show’s success as a piece of musical theater is another story: The show’s creators invested so much in their gargantuan star that they neglected the corresponding human factor.

Ann Darrow (Christiani Pitts), a young woman from a Midwest farm, has come to New York City determined to make it as an actress—not just any actress, but rather, as she puts it, “the Queen of New York.”

As Ann soon realizes, there are dozens of other ambitious young ladies vying for that title. She quickly gets nothing but rejection in one professional audition after another.

Just when Ann’s fortunes are at their lowest, opportunity knocks in the form of Carl Denham (Eric William Morris), who rescues her as she’s about to be chased out of a bar for trying to catch a few winks of sleep. Carl is a film director and offers her the part of the leading lady in his next picture.

Ann quickly accepts and soon finds herself on a steamship commanded by a rough skipper (Rory Donovan) and his unsavory crew. Their destination: Skull Island, a place from which few have returned and where Carl intends to make the ultimate horror movie.

However, plans change when, soon after their arrival, they encounter Kong, a gigantic ape that crashes through the trees and carries Ann away. Carl quickly formulates a plan to capture the beast and bring it back to New York, where he can exhibit it as the eighth wonder of the world. Ann’s safety is only a fleeting afterthought.

Ann initially protests when hearing of Carl’s plan. She’s formed an emotional bond with Kong during their time together, before she escapes on her own. However, she’s all-too-quickly seduced by Carl’s promises of fame and fortune and ends up betraying the beast for her own self-interests. The betrayal will ultimately haunt her.

Throughout the story is a message on the dangers of blind ambition. While there is nothing wrong with reaching for the stars—the opening musical number is about exactly that—when success is built on the sufferings of others, getting to the top can leave a bad taste in the mouth.

Carl, on the other hand, is happily making money hand over fist and sees Kong only as a commodity to be exploited. He threatens to destroy Ann’s rapidly rising career should she not honor their contract and play the scream-queen to Kong in the show he has created.

Kong may be the undisputed star, but the show also needs a solid supporting cast to really connect with the audience. The chief problem is the character of Ann, who comes across as having contradictory motives.

When we first meet Ann, she is rebuffing the sexual advances of a barman (Harley Jay). Yet she signs a contract with Carl, whom she’s just met, and goes off with him without a second thought.

She also knows her own mind and refuses to be a simple damsel in distress for the cameras. She wants to be an actress that women can be proud of, yet she’s perfectly willing to sacrifice anything and anyone for her career. Even in the end, one can’t help feel that despite her need for redemption, something expressed in the show’s closing number, she would still use her experience with Kong to further her career, should the opportunity arise.

Pitts, it should be noted, does have a strong singing voice and delivers her numbers flawlessly.

Morris does well as Carl, a one-dimensional cardboard villain. Ironically, Carl comes across as more believable than Ann in that he stays true to his particular belief throughout.

Also quite good is Erik Lochtefeld in the underused role of Lumpy, a long-time employee of Carl and the only truly sympathetic human character in the show.

While the show’s best moments belong to Kong, a pivotal scene where the ape breaks free from captivity is curiously obscured from view. To show the escape completely may not have been physically possible, or it may have been a creative choice not to do so. Yet what is actually shown—via a mixture of comedy and drama—comes across as a failed attempt to present Kong as the terror the beast would have been to a world that does not understand him.

The sets and projection design by Peter England are simply fantastic. Kudos go to the entire team that had a hand in the creature’s creation, and the 14-person crew that brings it to life for each performance.

More spectacle than substance, “King Kong” succeeds in bringing awe, sympathy, and understanding for its title character, but as a satisfying theatrical experience, it falls somewhat short.