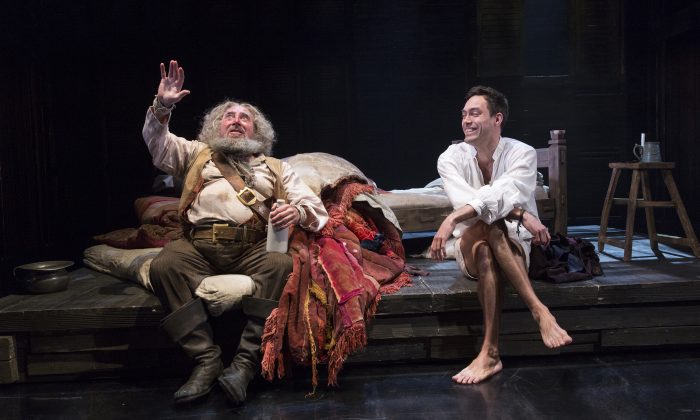 (L–R) Antony Sher as Falstaff and Alex Hassell as Prince Hal in Shakespeare’s “Henry IV Part II,” part of the series of four plays the Royal Shakespeare Company has mounted at the Brooklyn Academy of Music. (Richard Termine)
Arts & Culture

NEW YORK—To mark this year’s 400th anniversary of William Shakespeare’s death, a series of four of his history plays is being presented at Brooklyn Academy of Music (BAM) via Britain’s Royal Shakespeare Company’s “King and Country: Shakespeare’s Great Cycle of Kings.”

Remarkably, much of the series’s contents parallel the present political climate here at home. The tetralogy, known as “The Henriad,” encompasses leadership—both positive and negative: competitiveness, slander, greed, underhandedness. One need only watch the evening news to see these elements played out.

In a performance rich with subtlety, David Tennant is alternately arrogant or sullen.

But, to balance the scales, Shakespeare also offers a noble and just king: Henry V, the final royal personage portrayed in the series, following “Richard II” and “Henry IV, Parts I and II.”

Enter King Richard in the person of actor David Tennant. In a performance rich with subtlety, Tennant is alternately arrogant or sullen, and finally full of regret as he comes to realize that he has been the cause of his own downfall.

Attired in long robes, his hair flowing down his back, Richard presents an imposing figure. Further, the actor speaks the verse as if he were born to it—a great plus in this role as “Richard II” is almost entirely in verse. That Tennant is also a remarkably versatile performer is evidenced in the fact that he is known primarily for his work in a BBC TV series. This production marks his first appearance in the United States.

Richard is not the noble hero as he might like to appear; there are some unsavory deeds in his past. Nevertheless, overall, he is a sympathetic figure, one whom the audience favors.

Richard’s prime adversary is his cousin, Henry Bolingbroke, son of John of Gaunt (Julian Glover), Richard’s uncle. Jasper Britton’s Henry is the polar opposite of Tennant’s Richard. Blunt, bereft of verbal flourishes, he sees his goal—to obtain the crown—and goes right to the point.

Unfortunately for Richard, Henry is beloved by the people while Richard stands aloof, even disdaining commoners. Like many rulers of his time, Richard does not rule wisely, thinking only of his own wants rather than those of the people. This is a character flaw that will result in Richard’s downfall.

Due to an altercation involving Bolingbroke, Richard sees fit to exile him for a period of time, thinking this will get him out of the picture. However, Richard makes a fatal error. He seizes John of Gaunt’s property after the old man’s demise. Henry, enraged because he’s been deprived of his rightful inheritance, gathers an army, invades Britain, and captures Richard.

In the powerful deposition scene, where Richard is forced to give up his crown to Henry Bolingbroke, Richard, now barefoot and wearing a simple white gown like a penitent, retains his arrogance.

Henry cynically lets Richard vent, then hurries him off to await his ultimate fate in the form of murder. To this Henry hypocritically cries, “Though I did want him dead, I hate the murderer.” Henry’s complicity in Richard’s murder will later haunt him.

However, Henry has at last achieved his goal: He is now King Henry IV.

In “Henry IV Part II,” Henry is in almost constant need to fend off rebels. Further, his son, heir to the throne Prince Hal (Alex Hassell), insists in carousing with the rowdy Sir John Falstaff instead of grooming himself for kingly duties.

The fat, blustery Falstaff is played to the hilt by Antony Sher.

Henry, who is now quite ill and almost never sleeps, remarks famously: “Uneasy lies the head that wears a crown.”

The fat, blustery Falstaff is played to the hilt by Antony Sher. He conveys absolute amorality, openly opposing the highest law official in England, Lord Chief Justice (Simon Thorp). The theme of anarchy versus the rule of law suffuses the play.

Here the excellent Oliver Ford Davies as Justice Shallow and the fine Jim Hooper as Justice Silence reminisce about the good old days. Once robust and full of vigor, they mourn the coming on of old age and, ultimately, death.

Enter Falstaff, an old school chum of Shallow’s, assigned to select conscripts for an oncoming war. After interviewing Mouldy, Shadow, Wart, Feeble, and Bullcalf—all true to their names—he selects Shadow, Feeble, and Wart; the others have bribed their way out.

Hal takes the Chief Justice to be his father figure, replacing his own father, Henry, and the reprobate Falstaff. Finally winning the crown, Hal becomes Henry V.

Politics, morality, guilt, loyalty, mental health, and more are covered by the brilliant Bard of Avon, who, according to the records, lived to be only 52.

With an extraordinary company of skilled and disciplined actors, under the helm of artistic director Gregory Doran and excellent technical support (set by Stephen Brimson Lewis, lighting by Tim Mitchell, music by Paul Englishby, and sound by Martin Slavin), the Royal Shakespeare Company has presented a series of which William Shakespeare himself might well have been proud.

Diana Barth writes for several publications, including New Millennium. She may be contacted at diabarth@juno.com