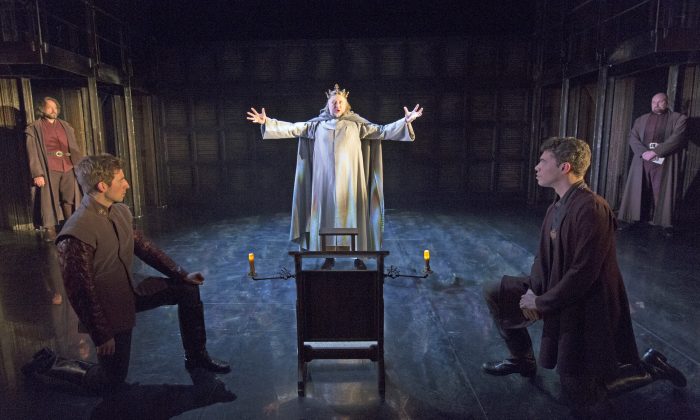 King Henry IV (Jasper Britton), center, having ascended to the throne of England, learns all too quickly that winning a battle is not nearly as difficult as keeping the peace. (Richard Termine)
Arts & Culture

NEW YORK—Remember your allies and the promises you’ve made them in your climb to the top, warns William Shakespeare in “Henry IV Part I.” Now at the Brooklyn Academy of Music’s (BAM) Harvey Theater as part of the series “King and Country: Shakespeare’s Great Cycle of Kings,” the play is presented in conjunction with the Royal Shakespeare Company and Ohio State University.

King Henry IV (Jasper Britton), having ascended to the throne of England, learns all too quickly that winning a battle is not nearly as difficult as keeping the peace. Dissension comes from the Percy clan in Scotland and their relatives in Wales.

Prince Hal, King Henry, and Hotspur all face up to the responsibilities their positions, conscience, and honor demand.

These former supporters are angered that the new king treats them more as conquered subjects than people who have power in their own lands and with it a certain expectation of rights.

The discontented include the impetuous Harry Percy (Matthew Needham), also known as Hotspur; his father, the Earl of Northumberland (Sean Chapman); and his uncle, the Earl of Worcester (Antony Byrne).

While the king deals with these problems, he also bemoans that his son, Hal (Alex Hassell), is living as a wastrel in the Eastcheap taverns. Drinking and whoring, he acquires what money he needs through theft and guile.

Among Hal’s companions is Sir John Falstaff (Antony Sher), an aging, rotund fellow who’s clearly seen better days. Falstaff is something of a coward, a teller of tall tales, and first and foremost, a survivor.

Hal hasn’t forgotten his royal roots. Instead he’s trying to grab as much enjoyment out of life as he can before taking the role of prince of the realm. Hal’s turning point comes when he learns the Percy family has turned to open revolt.

Hal races to his father’s side with several of his companions in tow, including a very unhappy Falstaff. Upon returning home, Hal finds he must not only help defeat his father’s enemies, but also the king’s lingering feelings of disapproval for his son’s recent actions.

“Henry IV Part I” contains more exposition than most Shakespeare’s plays. Numerous scenes add depth although they are not technically essential to the plot. A scene with Hotspur shows his ravenous taste for battle, offset by the deep love/mock hate relationship with his wife (Jennifer Kirby). In another (one of the funniest scenes of the play), Hotspur explodes in rage when recounting how, for family’s sake, he has to keep silent while his father-in-law (Joshua Richards) recounts endless tales of past exploits.

The play also includes several lengthy episodes involving Falstaff, Hal, and their friends at the tavern. While many productions edit out some of these scenes for brevity, it’s refreshing to see them included for the added insights they contain. These include a musical interlude involving Hotspur’s brother-in-law, Lord Mortimer (Robert Gilbert), and his wife (Emma King), a married couple who share no common language.

Throughout are several coming-of-age elements—all shown without regard to the chronological years of the participants involved. Prince Hal, King Henry, and Hotspur all face up to the responsibilities their positions, conscience, and honor demand.

And in antithesis, Falstaff humorously personifies what happens when one fails in that regard, leading to the initial break between Falstaff and Hal. While the prince adapts to his role as heir apparent, Falstaff seems unwilling to move beyond the man we first see, despite his occasional proclamations to do so. The new relationship contains a bit of irony, as until recently Hal enabled Falstaff, including him in his schemes and making him the butt of endless jokes.

At the same time, Falstaff becomes the voice of the cynical realist. While on the field of battle, he pauses to look down at a recently slain soldier and asks what good is honor when one is dead? He notes that the better part of valor is discretion.

Tying together the strong acting by the entire cast is the equally strong direction by Gregory Doran. The storylines juxtapose nicely until finally coming together in a clash of steel, a strong bond of family, a sometimes grudging respect between enemies, and in at least Falstaff’s case, some loud complaints.

Thanks to the entire creative team and cast, this production of “Henry IV Part 1” offers a tale very well told: The audience cares about the characters and what becomes of them.