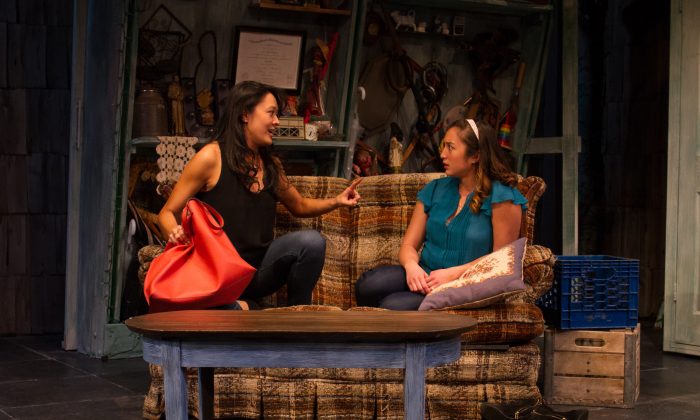 Is the old home really sweet?
By Diana Barth

NEW YORK—Leah Nanako Winkler’s “Kentucky,” now showing at Ensemble Studio Theatre, starts out lightly. A trio of girl singers, Merissa Czyz, Samantha Sembler, and Shannon Tyo, serenade us with an energetic hip-hop style, and we know we’re in for an evening of flat-out hilarity.

But that’s only part of the deal. The scene shifts to a therapy session in New York.  Hiro (Satomi Blair) complains to her therapist, Larry (Curran Connor), that her sister, Sophie (Sasha Diamond), is to be married down in Kentucky to a man she’s known for only six months.

Hiro’s got to get Sophie away from that land of limited possibilities and get her back to New York, where she can live a productive and happy life. Hiro can even get her a job as an administrative assistant at the company where Hiro works.

Larry’s not too keen on Hiro’s idea, but there’s no stopping his willful patient from doing whatever she wants. So he gives in and prescribes pills to help her on her stressful journey.

James hasn’t a good word to say about anyone or any thing. He desperately wants to “sell his stuff” on eBay, but no one will teach him how. Anyway, he resents having to resort to some mechanical appliance just to sell stuff.

James lashes out at smartphones, saying that they make people stupid. In short, he’s anti all those elements of “progress” that possess so many of us, and he cries out, “We’re all addicts to machines!”

Grandma (Marcia Haufrecht) makes an auspicious entrance, offering shrewd comments that artfully cut to the quick. She’s someone you could love—as long as she’s not your grandmother. One might best describe her physical appearance as a carefully put-together bag lady.

Born-again Christians are on display, for Sophie is madly in love with and engaged to Da’Ran (Ronald Alexander Peet). He’s the son of preacher Ernest (Mikumari Caiyhe) and his wife, the vivacious Amy (Lynnette R. Freeman), who belts out a mean singalong number, inviting the audience to join in.

This family is African-American; Sophie and Hiro are Japanese. Thus racial intermarriage is on playwright Winkler’s agenda.

Hiro runs into her old flame, Adam (Alex Grubbs), who treats us to an emotional monologue on how he used to be “so handsome,” and how he misses the favored treatment he received back in his old school days. He’s still good-looking, but back then he was practically worshipped by young girls.

Adam tries to persuade Hiro to not return to New York; she should stay with him in Kentucky. After all, Kentucky offers horses, good whiskey, fried chicken, and a lot of other good stuff.

However, Sophie and Da’Ran’s wedding does take place. Masako lovingly offers her home-cooked rice balls to the assembled guests. Even James dresses and behaves nicely for the occasion, after previously appearing disheveled and cantankerous.

The trio of young women previously referred to appear as bridesmaids, and in fact, have served most entertainingly as a sort of musical Greek chorus at various times throughout the play.

Nicole (Megan Hill) and Laura (Emily Kunkel) are two old friends of Hiro’s, who offer their support to her at lunch one day.

Not to be omitted is Sylvie, Masako’s cat, played with great élan by Amir Wachterman. He, or she, takes stage vividly when called upon, even upstaging the humans.

Terrific costumes by Suzanne Chesney dress the players. Nick Francone’s set is minimal but effective. With all elements under Morgan Gould’s direction, Katie Spelman’s choreography and Sariva Goetz’s music direction and vocal arrangements add to the overall excellence of this production.

Theater Review: ‘When I Was a Girl I Used to Scream and Shout’

Presented by Ensemble Studio Theatre, in association with Radio Drama Network and Page 73, the play, which on one hand is a comedic romp, also offers food for thought on a variety of important topics. “How will this fadge?” as one of Shakespeare’s heroines once questioned. So see the play. I highly recommend it.

Diana Barth writes for various publications, including New Millennium. She may be contacted at diabarth@juno.com