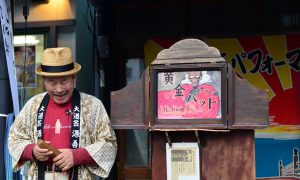 Kamishibai: How the Magical Art of Japanese Storytelling Is Being Revived and Promoting Bilingualism
0
Share Now
TelegramFacebookTweetEmailTellMeWeReddit
Copy Link 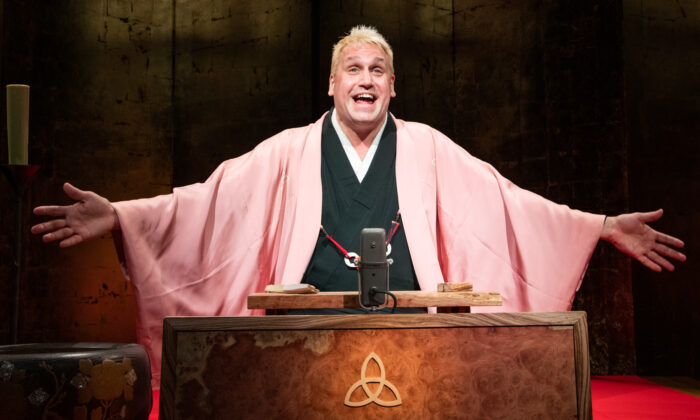 A soupçon of Japan
By Diana Barth

NEW YORK—Some years ago I had the pleasure and privilege of appearing in the classic Kabuki play “Kanjincho” at New York’s Institute for Advanced Studies in the Theatre Arts. It was directed by Kubuki legends Matsumoto Koshiro VIII and Nakamura Matagoro II. We performed off-Broadway and at the Library of Congress in Washington, D.C. Thus, I admit to being biased in favor of Japanese culture.

Rakugo is a centuries-old Japanese form of storytelling. It’s now being brought to New York’s New World Stages by the Canadian-born performer-director of Slovenian descent, Katsura Sunshine, whose given name is Gregory Robic. But don’t be fooled by Robic’s, that is, Mr. Sunshine’s seemingly inappropriate background.

Robic went to visit Japan supposedly for a brief stay, but he ended up living there for 20 years, during which time he became a student of rakugo master Katsura Bunshi VI, with whom he served a three-year apprenticeship. This made Sunshine only the second Westerner in Japan’s history to achieve rakugo master status.

Wearing the traditional kimono and holding a fan, Sunshine kneels on a small platform and tells his stories, mixing humorous events with a cultural education. For example, there are numerous ways to say “thank you” in Japanese, depending on the situation and the status of the person thanked. It’s often a bit of a struggle to find the right version.

The content of Sunshine’s stories is generally humble and down-to-earth. His delivery is brisk and rapid, sometimes too much so, demonstrating a ready wit and sharp mind. Overall, the performance is very enjoyable.

The set is simple, with only red and white lanterns overhead. The audience, which may have been puzzled at the beginning of the presentation, appears to eat it up enthusiastically.

The show would also be a good bet for kids; there’s enough naiveté to grab the interest of the younger set. And new stories will be introduced each month during the planned run through early January, so a revisit might be a good option, especially during the upcoming holidays.

An evening spent in the company of “Katsura Sunshine’s Rakugo” would, in my opinion, be quite pleasurable.