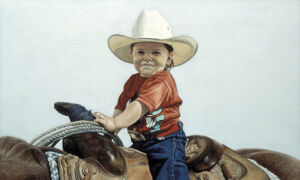 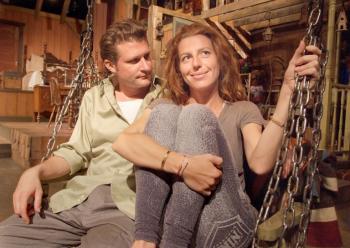 By Masha Savitz
Print
SANTA MONICA, Calif.—The audience leapt from their seats for a standing ovation at the conclusion of the world premier of Henry Jaglom’s new play, Just 45 Minutes From Broadway, directed by Gary Imhoff at the Edgemar Center for the Arts in Santa Monica, Calif.

The play is a peek into the Isaacs family. George Isaacs, a child star in the Yiddish theater, and Vivian, his actress wife, have two grown daughters.

The younger daughter, Pandora (Panda), is at home in the theater and less so anywhere else, which is why, after several failed love affairs, she has moved back to her parent’s home, just 45 minutes from Broadway.

Betsy, the older sister, hates showbiz. Lamenting her childhood filled with unpredictability and instability, she has moved away to become a “civilian.” She brings home her reliable, successful businessman fiancé, Jimmy, to meet her “weird” family, but is in for a surprise or two, along with the rest of the family.

Tanna Frederick is luminous as Pandora. With deep pathos or hilarious expression, she plays the range of emotion like Mozart the piano keys. You might even say that the part was made for her—and, well, as I learned during lunch with Frederick and Jaglom, it was.

Although we associate Jaglom as an icon of independent film (including Eating, Deja Vu, and the newest, Irene in Time), Jaglom has merely returned to his earlier calling as a playwright with the encouragement of muse Frederick.

Frederick quoted Harold Clurman, famed American theater director and drama critic, as saying that Jaglom is “a great new voice in the American theater” (referring to Jaglom’s first play, A Safe Place, later made into a film with Jack Nicholson, Tuesday Weld, and Orson Welles).

Jaglom, however, has been involved in filmmaking exclusively, until recently. His subject matter has nonetheless often revolved around actors of film or theater or has tackled a sociological issue and the emotions that surge beneath it and spring forth.

When asked about the difference between doing a play versus a film, Jaglom pointed out a challenge he encountered with his cast. His actors, who have worked with him before in film, were used to improvising dialogue, as Jaglom is known for allowing fluidity and flexibility with character’s lines. “I encourage them, once they get the intention of the character, to get their own dialogue and emotion,” said Jaglom.

When it comes to a play, Jaglom feels very differently and is resolutely committed to each word.

“For good reason,” said Frederick, who seems to deeply understand and appreciate Jaglom’s unusual style, comparing him to Chekhov and Williams. “But he [Jaglom] brings a contemporary rhythm and energy,” she added.

In a play, Jaglom creates the rhythm and energy through the language of the words, whereas with film, the pace and tempo is achieved through editing.

“My creation is in the writing, not in the editing,” asserted Jaglom of the main difference between the art forms.

“In the writing” indeed, this play is that precious combination of entertainment and intelligence. The clever and witty dialogue and well-studied human relationships provoke thought and discussion long after you leave the theater.

Jaglom admitted that he didn’t have a specific intention when he began writing, but within a few days he had the first act completed.

“You don’t know what’s in your brain,” reflected Jaglom, “‘till you sit down and write it.”

Jaglom’s next project is his film Queen of the Lot, starring Tanna Frederick opposite Noah Wyle and Chris Rydell, which will be released next year.