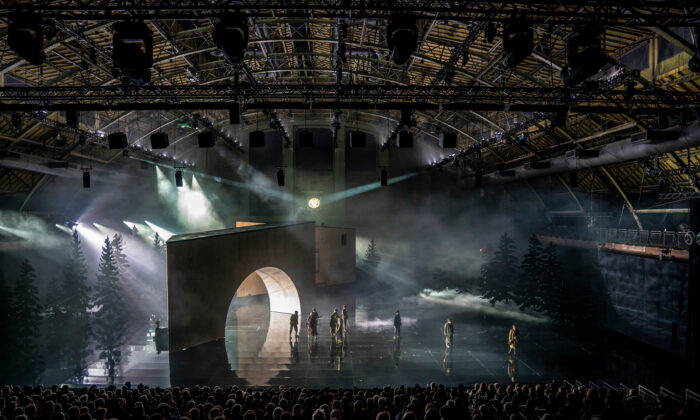 Theater Review: ‘Judgment Day’: A Collision Between Guilt and Innocence

Von Horvath wrote the play in 1937, just as Hitler was beginning to seize power, and the play contains overtones of what the playwright undoubtedly feared was to come. (Von Horvath died in 1938 in an unfortunate accident when he was only 36.)

Set in an unnamed Austro-Hungarian town, Thomas Hudetz (Luke Kirby) is the much respected stationmaster, noted for his efficiency and conscientiousness.  On the other end of the scale, his wife Frau Hudetz (Alyssa Bresnahan) is reviled by the townspeople for her arrogance and disrespect. At one point the frau remarks that she’d like them all to “drop dead.”

One day, as an express train nears the station, Hudetz is approached by the flirtatious young Anna (Susannah Perkins), who unexpectedly kisses him. As the train hurtles by, the distracted Hudetz fails to throw the proper switch.

Thus begins a series of events that will change the lives of many.

Anna, attracted to Hudetz, lies about the incident, saying that he did pull the switch on time. However, Frau Hudetz has seen the entire incident from her apartment window, as the couple lives directly above the station’s platform.

The frau informs on her husband but she is not believed by the townspeople simply because they don’t like her. They prefer to believe Anna’s version of events.

Here is the outset of mob thinking, so dangerous to the accuracy of the outcome of the situation. Will justice win out? Or, is justice simply a matter of opinion?

Frau Liemgruber (Harriet Harris) the town gossip, switches sides as smoothly as she might butter a slice of bread. Others follow suit.

Hudetz is at first lauded as a hero. Later he is viewed as a villain and is the object of a vicious search through the woods, with townspeople yearning to shoot him down.

In the end, both Hudetz and Anna are plagued by guilt. Neither comes to a happy end.

The noted British director Richard Jones, acclaimed for his production of “The Hairy Ape” at the Armory some seasons ago, has taken a large view of the production. That is, he has taken full advantage of the size of Drill Hall and has selected creative technical artists who support his vision.

The set, by Paul Steinberg, consists of massive wooden panels that are wheeled into various positions by workmen. At times the entire cast must run through or around these panels, creating the sense of large crowds—or a mob—passionately seeking to exact justice.

There were times when I wished there were less emphasis on grandeur and more on the subtlety of human relationships. But that is a matter of personal opinion.

Performances by the 16-member cast are on a consistently high level, with kudos going especially to the lead actor, Luke Kirby, for his strong and dedicated performance.

For many reasons, this production of “Judgment Day” is a memorable one for these times, touching as it does, on the issues of truth, morality, and guilt and the dangers of general as opposed to specific examination of important social and political issues.