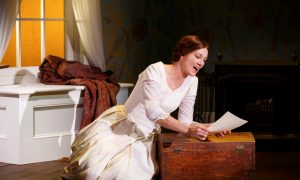 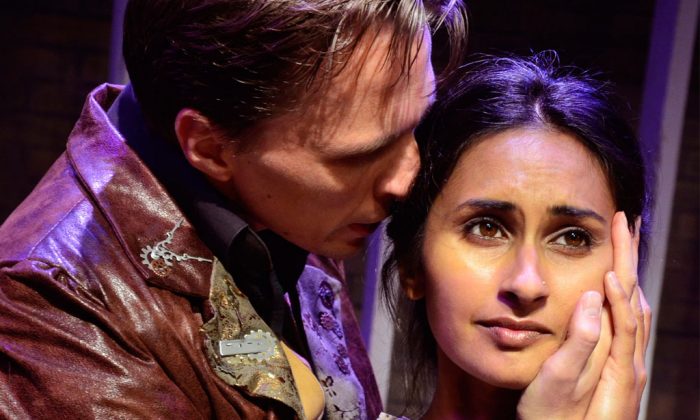 CHICAGO—It was a relief to see Jane Eyre told as something more than a love story. The love story is fully present in Lifeline Theatre’s extended-run production of course, but it’s only a part of a bigger theme. The thrust of Christina Calvit’s adaptation captures the whole tale of a young woman who, staying true to herself, unites passion and principle.

As a child, Jane (Anu Bhatt) speaks against the wrong done to her. Her cruel aunt (Kyra Morris), who cannot bear her, sends her away to a charity school but not without first stamping her with the reputation of being a deceitful child.

The harsh schoolmaster Brocklehurst (Anthony Kayer) does his best to keep happiness from all the schoolgirls, but most callously instructs Jane’s classmates to shun her. Only sickly Helen (Maya Lou Hlava) befriends her.

Jane is haunted by her loveless past—literally. Playing evil and good respectively, Brocklehurst and Helen follow Jane in most of the scenes, and at key moments late in the story, Jane casts each off.

In Edward Rochester (John Henry Roberts), the lord of the manor, Jane finds a strange but forceful figure who pays her more attention than she’s accustomed to and seems to respect her in his own brash way.

But something is not right in this happy, new life. Jane hears ghastly laughter at night, and no one will clearly explain who it is. Then Mr. Rochester is set afire—who set it? Mr. Rochester will not tell.

Lucid Jane and passionate Edward, both hungry souls, soon reveal their mutual love, and felicity seems in store for both until the mystery of Rochester’s past is revealed, thwarting the pair’s future happiness.

The beginning of Jane Eyre’s story has been told countless times, but less weight is usually given to the story’s second part. The latter half is usually treated as a series of complications to the story’s consummation. Here, though, more consideration is given to Jane’s second adventure.

On death’s door after leaving Thornfield Hall, Jane finds affection when sisters Diana (Morris) and Mary Rivers (Kate McDermott) take her in and treat her as one of the family. Their brother, St. John (Joshua Moaney), even offers Jane a school of her own to teach the poor in the area.

When Jane is left a small fortune and learns that her adopted “sisters” and “brother” are, in fact, actually her cousins, she shares her wealth with them all. Her happiness is nearly complete—she discovers that she’s not alone in the world after all.

St. John, seeing Jane’s selflessness, asks her to join him as a fellow missionary and wife. Jane will accept his plan, but only if she can be true to herself and go as a “sister”—not as his wife. She cannot give herself to one she does not love.

And this is the crux: Jane will not become Rochester’s mistress when marriage is impossible; she could not give herself to passion without the sanctity of marriage, despite her deep love. Her principle forbids it.

Nor can she choose sanctity without passion. She will not marry St. John out of misplaced zeal. Her desire to serve God is heartfelt, but she would be defying her own nature if she were to give herself to him without passion. Only sanctified passion, authentic and full-hearted giving will do.

At this very moment, just as Jane denies St. John, her future is clearly revealed to her, and she hears Rochester’s cry of despair. She then knows where she needs to be.

As always, Lifeline’s adaptation of a classic tells a big story on a little stage. What is lacking in space is made up for in creativity, and in this particular production, remarkable staging and technical solutions.

Galloping together, cast members create the horse from which Rochester is thrown when he first sees Jane, and in a comic touch, Pilot (Moaney), his dog, barks in excitement.

The fire scene benefits from the evocative use of lighting (designed by Kevin D. Gawley) on a long white piece of fabric, which covers Rochester and then hangs from his balcony-like bedroom.

The sparse scenic design (William Boles) adds to the many scene transitions, where the unique use of long upright two-by-four planks, easily adjust to create different locales. The sound design and music (Christopher Kriz) accent these transitional moments.

A talented cast adds to the effort. Roberts works well as the passionate, desperately lonely, yet trapped Rochester. And Bhatt as Jane, although anything but plain, is his equal in strength and will. She is not as young as Jane might be, but this makes her wisdom and strength easier for us to accept.

Currie is delightful as the garrulous Mrs. Fairfax as well as the oblivious yet doting Lady Ingram, mother to Blanche Ingram (Jhenai Mootz), an oozing flirt. Mootz also makes a fine wretched hag as Bertha.

Kayer contrasts the paunchy, self-righteous Brocklehurst with a humble, sweet Porter, another role.

Despite her stage composure, Hlava is miscast and likely too young to display Helen’s otherworldly, ascetic nature. Adding to this misstep is her makeup, which seems more ghoulish then saintly.

Because of these problems with Helen, we lose the contrast between the two ghosts who follow Jane on her journey to selfhood: Brocklehurst, with his harsh demands for deprivation in others, and Helen, with her otherworldly self-denial

Despite this failure, Lifeline’s “Jane Eyre” is another wonderful creation for the small theater, and puts Jane’s voice squarely front and center, the maker of her own life.

It’s all the more amusing, then, to read posted in the lobby snippets of the critical reception the novel received when it was published under the pseudonym of Currer Bell. This masterful work was considered too virile and insightful to be penned by a woman, despite of (or because of) the clarity of her voice.