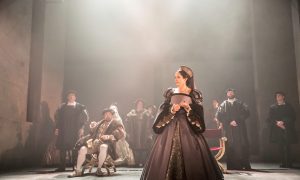 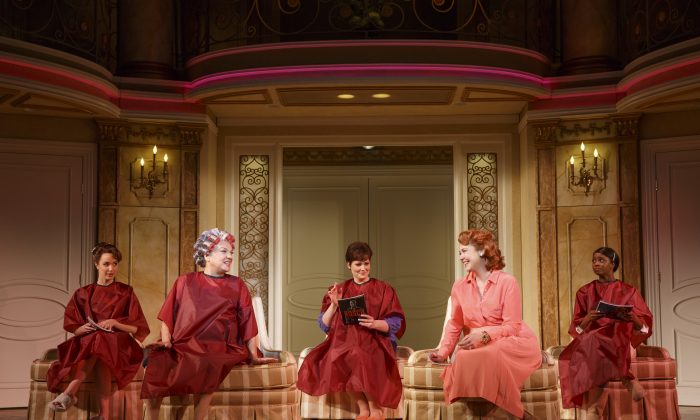 Preparing for the wedding: the bride (Sierra Boggess), her mother (Tyne Daly), her older sister (Lisa Howard), her mother-in-law to be (Harriet Harris) and her maid of honor (Montego Glover) in “It Shoulda Been You.” (Joan Marcus)
Arts & Culture

Theater Review: ‘It Shoulda Been You’

NEW YORK—In a way, this new hilarious musical is a takeoff on the old “Abie’s Irish Rose”—in reverse. We’ve got a Jewish bride about to marry a Catholic groom. But this one is set to music with almost unimaginable hijinks at the hands of director David Hyde Pierce.

With book and lyrics by Brian Hargrove and music by Barbara Anselmi, two families tear at each other in comedic high dudgeon. It’s almost like the two warring families of “Romeo and Juliet.” But not quite.

It’s a lot funnier. With Tyne Daly as the Jewish mother and Harriet Harris as the Catholic mother, how can one go wrong? The lovely bride, Rebecca Steinberg (Sierra Boggess), may be having second thoughts, however.

Meanwhile, Rebecca’s slightly overweight sister, Jenny (Lisa Howard), is holding down the fort, making all the split-second decisions that must be made to make the wedding reach its final vow.

Nevertheless, Jenny must fight depression, especially when Mom Judy not so subtly chides her for not passing up a few meals—for if she had, she, Jenny, might be walking down the aisle instead of younger sis Rebecca.

Into the mix comes Marty Kaufman (Josh Grisetti), an old flame of Jenny’s. Grisetti is thin, limber, and joyfully acrobatic. He adds a lot of comedic fuel to the fire; in short, he is terrific.

There are other Broadway stalwarts in the cast, such as Chip Zien as Judy’s ever calm (though henpecked) husband. Helping Jenny bring things to fruition is party planner Albert (Edward Hibbert in an effective turn).

Theater Review: ‘Wolf Hall,’ Parts I and II
Closing events in this show go on a different spin than might be expected. Rebecca’s maid of honor (Montego Glover) and best man (Nick Spangler) bring their own slightly offbeat desires to the mix. I’ll only say, it’s very 21st century.

But all in all, although there’s nothing prepossessing in the text, it is one of the funniest productions I’ve ever seen.

Diana Barth publishes New Millennium. She may be contacted at diabarth@juno.com