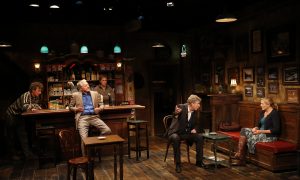 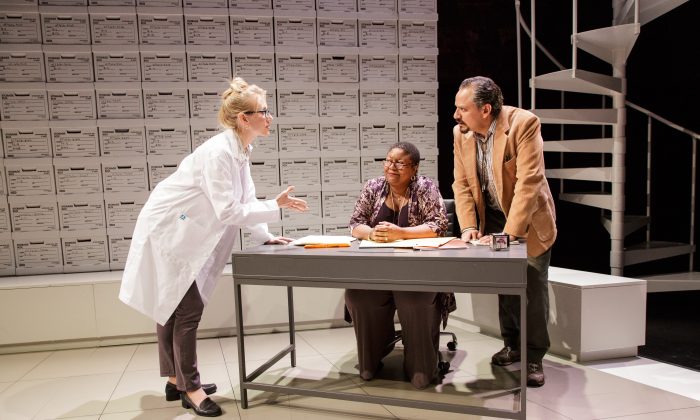 (L–R) Tina Benko, Myra Lucretia Taylor, and Jesse J. Perez in a scene from “Informed Consent,” a play in which a world of data is pitted against a world of relationships. (James Leynse)
Arts & Culture

NEW YORK—During the height of the Monica Lewinsky scandal, former President Bill Clinton said it all came down to the question of what “is” is. Such hairsplitting of words and the intent behind them is one of the underlying issues in Deborah Zoe Laufer’s thought-provoking drama “Informed Consent.” Based on actual events, the work is being presented by Primary Stages and Ensemble Studio Theatre at the Duke on 42nd Street.

Jillian (Tina Benko), a genetic anthropologist, has been tasked with trying to figure out why a Native American tribe, living on the floor of the Grand Canyon, has such a high rate of diabetes. According to the tribe’s history, they have lived there for all time, something they take quite seriously.

They also believe their blood to be sacred, which is why they have never allowed it to be collected by outsiders for any reason.

Informed consent acts as a safety valve to prevent science from running amok.
Social biologist Ken (Jesse J. Perez), who is quite familiar with the tribe’s culture, advises Jillian to take a slow approach. However, Jillian, who continually feels she has no time to waste—for anything—instead charges blindly ahead, not even taking the time to read Ken’s book on the tribe and its customs.

Eventually, Jillian is able to convince Arella (DeLanna Studi), one of the tribe members, of the importance of the study. Arella, in turn, convinces the rest of the tribe to allow their blood to be collected.

Unbeknown to the tribe, Jillian goes a lot further in her research than simply looking into diabetes. She also looks into incidents of tribal inbreeding, and even more significantly, the tribe’s migratory patterns. She’s interested in what groups their ancestors came from before settling in the Grand Canyon, or indeed in the United States.

This line of research, however, calls into question the tribe’s essential belief system, something they are definitely not happy about. While in her defense, Jillian points out the tribe did give their informed consent for the study, the issue comes down to exactly what kind permission was given and what that permission did and did not implicitly allow.

As with the Clinton incident, a lot turns on specific wording, even down to one word, which may or may not have been said.

This is why the idea of informed consent looms so large. It acts as a safety valve to prevent science from running amok; it gives those participating knowledge of exactly what is to take place before actually beginning a process, whatever it happens to be.

The idea is to avoid situations such as what happened with the infamous Tuskegee Study involving African Americans and the effects of syphilis.

More pragmatically, informed consent acts as a way to cover the collective rears of those administering such programs. The establishment, any establishment actually, seeks to protect itself from possible litigation.

When one disregards informed consent guidelines, no matter how well-intentioned the goals happen to be, it can lead to accusations of betrayal, the destruction of relationships, and in the case of the tribe, the continuing of a pattern of mistreatment that has gone on for hundreds of years.

Jillian’s efforts to help the tribe threaten to take away their very identity—one of the few things they have left to call their own.

Also present is the question of whether one person has the right to tell the truth to someone who either doesn’t want to hear it, or, as in the tribe’s case, are perfectly happy with their own truth.

This difference of perspective is a very real one for Jillian. She has a nearly 100 percent chance of getting early-onset Alzheimer’s; her mother died from the condition at age 36. There’s a chance her 4-year-old daughter, Natalie (Studi), will suffer the same malady.

Jillian is at odds with her husband, Graham (Pun Bandhu), who does not want Natalie to be tested. He’s determined their daughter should have as normal a life as possible and not be defined by this illness, as Jillian has let it define her.

Jillian, on the other hand, believes any control she has in her personal and professional life is quickly running out. She has a desperate need to do and to learn as much as she can for as long as she’s able.

Laufer and director Liesl Tommy do a great job blending all these elements into the show’s relatively short running time without making any of the scenes feel rushed. They’re even able to add some moments of levity, such as when Jillian and Graham meet for the first time.

The main character Jillian makes almost no attempt to understand the tribe’s point of view.

Benko is excellent as the hard-driving Jillian. She’s a woman who can never let up, as when telling Natalie a bedtime story or taking her to a birthday party, a party where Jillian ends up unexpectedly bonding with some of the other mothers for perhaps the wrong reasons.

From the beginning, Jillian makes almost no attempt to understand the tribe’s point of view. She takes refuge in the facts, figures, and possibilities of genetics, not allowing room for any other way of thinking.

Perez is good as Ken, whose first priority is the tribe. But in trusting Jillian, he fails to take into account that her priorities might be different than his own.

Studi nicely gives voice to Arella and through her, the beliefs of the tribe, its history, and the situations that have made them ironically now so dependent on those they mistrust. It was their desperate situation that caused Arella agree to trust Jillian in the first place.

“Informed Consent” takes a hard look at a tough ethical issue and is not found wanting in what it presents.

Also in the cast is Myra Lucretia Taylor.