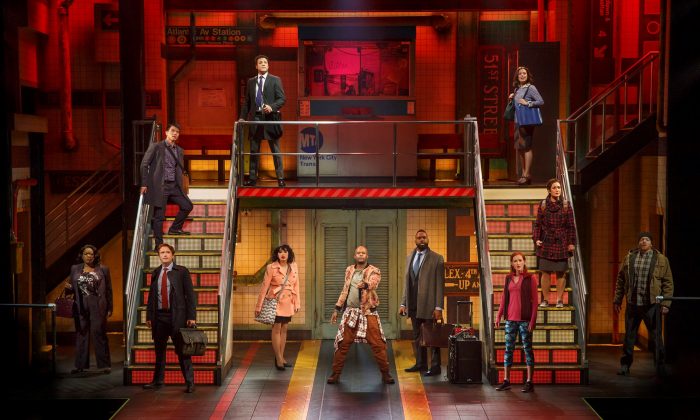 The cast of “In Transit” on the set by Donyale Werle. (Joan Marcus)
Arts & Culture

NEW YORK—The creators of the Broadway musical “In Transit” certainly understand the New York subway system—especially the inconveniences underground travelers regularly encounter, including train delays, transit workers who would prefer not to deal with commuters, audio announcements barked out over an incomprehensible intercom system, and machines that deduct money from your metro card without letting you through the turnstile.

The show’s creators (book, music, and lyrics by Kristen Anderson-Lopez, James-Allen Ford, Russ Kaplan, and Sarah Wordsworth) look at the lives of various subway riders as they travel from one destination to the next. The characters are “in transit” not only in terms of going from point A to point B, but also in moments of transition in their personal and/or professional lives. All songs are delivered a cappella.

‘In Transit’ is a heartwarming piece of entertainment.

Among these passengers is Jane (Margo Seibert), a 33-year-old actress who, after 15 years of auditioning, is up for the lead in a Broadway show; Ali (Erin Mackey), who is having trouble getting over her ex-boyfriend; and Nate (James Snyder), once a high flyer in the corporate world, who is now broke and out of work.

Each of the tales offers lessons on such matters as friendship, love, and the importance of respecting others, as well as oneself. Many are told in song, often with a self-deprecating air. Nate explains the importance of saving for a rainy day–especially if you mistakenly hit the “reply all” key to a work email. In a similar vein, Ali explores her failed relationship, and her subsequent actions that could brand her a stalker if the entire sequence were not played so comically over the top.

Conversely, just because you have had bad luck with relationships doesn’t mean you should stop trying. Jane learns this lesson when her girlfriends drag her to a bar for a night out.

Other topics covered include faith and family, and what happens when the two collide, and the reality that the older you become, the harder it is to maintain your dreams.

Despite the underlying seriousness of these issues, none of the characters feel anything close to three-dimensional. They are symbols, which the audience can relate to, rather than having an identity in their own right. Fortunately, the situations and the appealing actors are able to hold our interest.

Serving as the narrator of sorts is Boxman (Chesney Snow), a rapper and poet plying his trade on a subway platform while offering pearls of wisdom and the occasional metro card swipe to those in need. Boxman is someone who riders normally pass by without taking the time to get to know.

Also falling into that category is Althea (Moya Angela), a worker in a token booth, who rarely is noticed by riders at all—unless customers vent their frustrations about a subway problem.

Another thing the show has going for it is its very enjoyable score. Deke Sharon’s a cappella arrangements include numerous sound effects, all vocally produced by the cast. Indeed, if one didn’t know in advance that there was no musical accompaniment, you’d be hard pressed to believe there wasn’t a band just offstage.

Among the standout musical moments are Nicholas Ward in “Wingman,” a song about the need to get back up when you’ve been knocked down by life, and Snyder as Nate in angst at seeing his life upended by his own hand in “Broke.”

Seibert is nicely earnest as the ever-hopeful Jane, while Mackey cuts both a hilarious and poignant figure as she tries to accept that her ex has moved on without her.

Angela is fine as Althea. The character’s exchanges with Nate offer a clear reminder that little niceties can go a long way.

Despite the underlying seriousness of these issues, none of the characters feel anything close to three-dimensional.

Snow is excellent as Boxman, an introspective soul always ready with a kind word and some good advice—for those willing to take the time to listen.

A good part of the show takes place in an underground subway station, which calls attention to the fact that Donyale Werle’s set is far too clean. It would have been much more realistic with a few cracks in the walls, a bit of peeling paint, and scattered garbage—although everyone’s favorite transit rodent does make a cameo appearance, complete with pizza.

Despite its shortcomings, “In Transit” is a heartwarming piece of entertainment, with more than a few jabs at the system on which millions travel every day. All aboard!