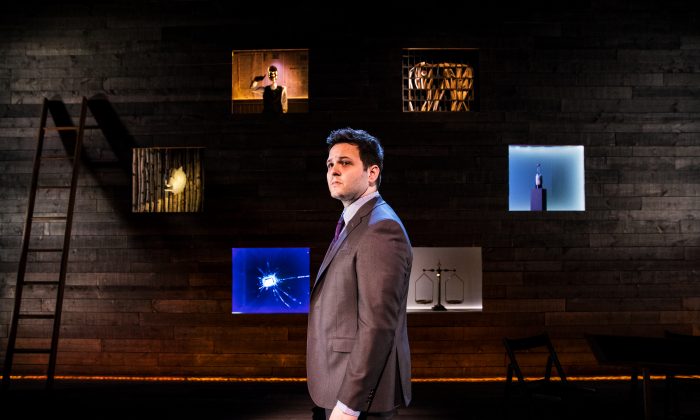 Derek DelGaudio in “In and of Itself.” (Matthew Murphy)
Arts & Culture

Theater Review: ‘In and of Itself’

Magic, and then some
By Diana Barth

NEW YORK—Before you even enter the theater proper, you note a lobby wall replete with innumerable cards, all proclaiming “I AM,” followed by a word or phrase describing what one wants to be or considers oneself to be. Examples are “doormat,” “idealist,” “fish out of water,” “eccentric,” and so forth, ranging from the serious to the silly.

You’re told to select a card and take it with you into the theater.

The show probes the viewer’s mind.

This unique magic show, created and performed by Derek DelGaudio, three-time award winner of the Academy of Magic Arts, is a concoction of plain old-fashioned sleight-of-hand and card tricks, all of which he performs adroitly. A charismatic figure wearing a brown three-piece suit, DelGaudio, now 32 years old, has been involved in learning and performing magic tricks since he was 12.

But the show, directed by four-time Emmy Award-winner Frank Oz, concerns itself with more than magic. It probes the viewer’s mind, inviting him to examine what identity is, really. As the show is interspersed with illusion, one may indeed begin to question formerly held conceptions.

The back wall of the stage features cubbyholes holding unrelated objects: a depiction of a man holding a revolver—leading to a segment on Russian roulette, a wolf, a balance scale, a gold brick—which dissolves into nothingness and is later to be found on a Manhattan street corner, and letters in envelopes.

The letters result in an audience volunteer being asked to pick any of them at random and read it aloud. The letter chosen turns out to be from her mother, in her mother’s handwriting. Can one be skeptical? Perhaps. But it was certainly a startling effect.

Inviting feedback regarding the “I AM” cards the audience had chosen earlier engenders their participation, which livens the proceedings and gets the spectators yearning for more.

But DelGaudio, the opposite of the aggressive carny barker type, seduces the audience by being conservative; he seems almost reluctant to win them over.

The show was at times mesmerizing, and never less than interesting. You can do worse than going downtown to the Daryl Roth Theatre and picking out your own card.