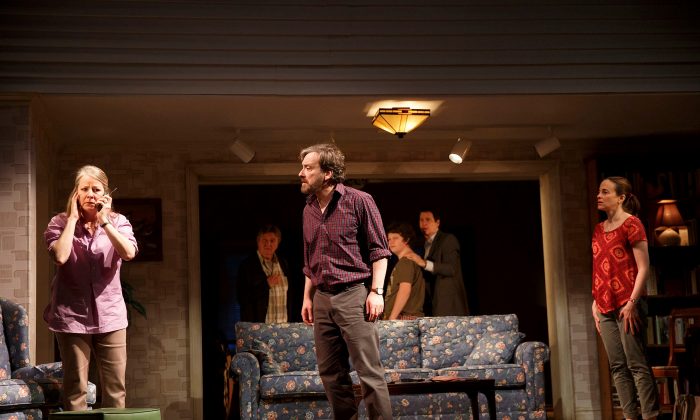 Theater Review: ‘If I Forget’

NEW YORK—Steven Levenson’s new play, “If I Forget,” displays a passionate family life, with its varied tugs and pulls of affection, conflict, success, failure, and regret, against the backdrop of the political scene in the United States in the years 2000 to 2001.

Levenson’s portrayal of a Jewish family living in a white, upper-middle-class neighborhood in Washington offers something just about everyone can identify with.

The entire cast is superior.

Three generations of the Fischer family have come together to celebrate the 70-something birthday of patriarch Lou (Larry Bryggman). The matriarch of the family has recently died, and the family still misses and mourns her feisty presence.

In addition to talk and dissension about Bush versus Gore, the current Middle East turmoil is major grounds for discussion, particularly because Michael and Ellen’s daughter, who is somewhat unstable emotionally, is taking a study tour of Jerusalem and they fear for her safety.

In a cross between modesty and blow-hardness, Michael, a Jewish studies professor, divulges his current triumph: He is sure to get tenure shortly, a major coup. However, he has recently written a book featuring controversial views toward the Holocaust, implying it has been made too much of in present-day society—views apparently disapproved of by Lou, who has read the manuscript but has failed to voice an opinion on it to Michael.

Lou’s heartfelt attitude later receives voice when he movingly recounts his own personal experience in being part of the U.S. military detachment responsible for liberating the dreadful Nazi prison camp at Dachau. In his view, the Holocaust must never be forgotten.

Later in the play, Lou suffers a debilitating stroke. Now the basic family interrelationships become vividly apparent: Heretofore loving bonds are severely strained, as Lou now needs 24-hour care. How and who is going to pay for it?

Some family members rise to the occasion with generosity; others try to hide in the woodwork, so to speak, citing recent financial losses.

Their painfully reached conclusion is to sell a modest family-owned store in an up-and-coming area of Manhattan, a sale which could net them an enormous profit.

On the other side of the ledger, the store has been in the family for years, representing a kind of connection with tradition, and which had been originally planned as a legacy to be left to future generations. If sold, there would be nothing to leave them.

Furthermore, Sharon has strong personal reasons for not wanting to sell. Lou also dramatically rejects the idea; but how can this vulnerable person exert any power in such a situation?

The remarkable and satisfying point about Levenson’s play, presented in its world premiere by Roundabout Theatre Company, is that it offers to the greatest extent possible all sides of the arguments, both political and personal. These are tough issues, and it’s very difficult to make one’s mind up. It would seem that the playwright himself may not have decided.

In short, it’s a play about ideas, and forces the viewer to think. How nice, after all those hours of meaningless TV offerings.

Speaking of TV, actress Kate Walsh has made a detour from her television successes and strongly impresses as Holly, while Jeremy Shamos offers a powerful and complex Michael as her sometime foil.

But the entire cast is superior. We see a remarkably smooth and integrated ensemble; they actually seem like a real family.

Aside from the acting gifts noted, the man at the helm is director Daniel Sullivan. Not only does he guide the actors on their emotional quest, but he has staged the actors for this involved and complex play in a way that visually clarifies relationships and intentions, on behalf of the audience’s greater and more immediate understanding.

The terrific two-level set design by Derek McLane offers an intimate view of the family home, with action often possible on both levels (upstairs and downstairs) simultaneously.

Even after two-and-a-half hours, the interest never flags. There’s a lot going on in Levenson’s engrossing play.