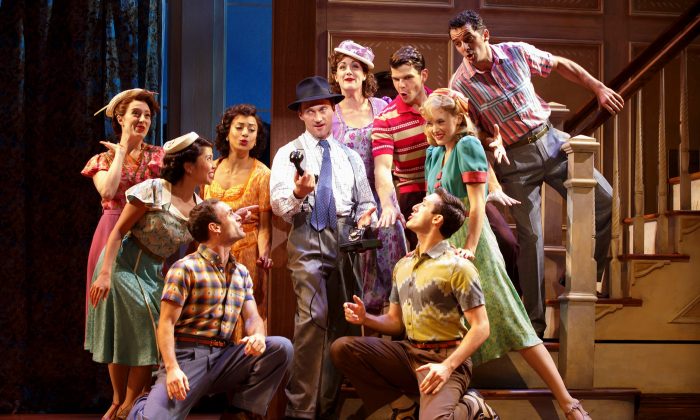 NEW YORK—The Roundabout Theatre Company production of the 1942 film with Bing Crosby and Fred Astaire, “Holiday Inn,” will be an early Christmas present for Irving Berlin lovers. While not the great American drama, it is a light, fun-filled show providing classic Irving Berlin music, excellent choreography by Denis Jones, and beautiful costumes by Alejo Vietti.

The production has followed the film story faithfully: A successful nightclub trio of singers/dancers is about to break up. Jim Hardy (the Bing Crosby role here played by Bryce Pinkham) decides to give up show business for a farm in Connecticut, hoping to settle down with one of his act’s partners, Lila Dixon (Megan Sikora).

‘Shaking the Blues Away’ was a standout.

Lila, though, has a change of heart and continues the act with the third member, Ted Hanover (the Fred Astaire role, ably danced by Corbin Bleu), and the new duo act takes a gig they have been offered.

Jim, brokenhearted, forges on with his farm, which comes with a Ms. Fixit (Louise), well played by Megan Lawrence, who brings laughs to almost every line.

The former owner of the farm turns out to be the talented Linda (Lora Lee Gayer). Together Linda and Jim turn the farm into an inn open on holidays only.

Linda, of course, turns out to be Jim’s real love interest. But there are complications. When Lila deserts Ted for a millionaire and Ted needs a new partner, Linda seems just the person to fit the bill—but that would mean leaving Jim.

There were many creative musical numbers by a talented cast, but “Shaking the Blues Away” was a standout, especially with the use of jump ropes.

Conductor Andy Einhorn made Berlin’s beautiful music fill the theater. Because the Roundabout Theatre has no orchestra pit, the musicians were divided in front and placed on both sides of the audience. Yet the sound, played through a mixer, worked well for the orchestra and vocals, also.

As a side note, despite the fact that this delightful production will please many, because of its huge cast (six major players plus 16 ensemble and swing), the run may be shorter than it deserves—so see “Holiday Inn” soon.

Nanci Callahan is the founder and managing director of the West Side Cultural Center. She has written for many publications.