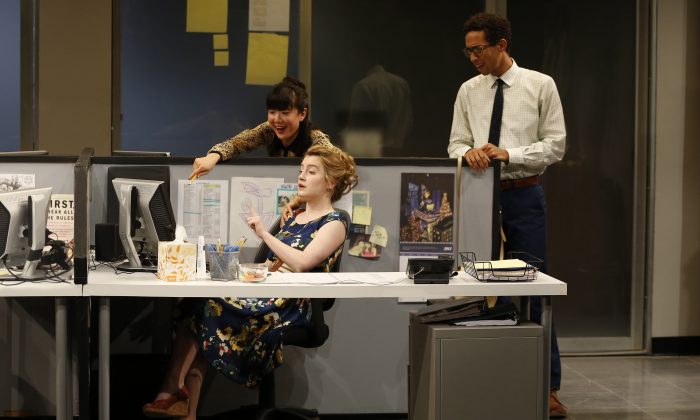 Jennifer Kim, Catherine Combs, and Kyle Beltran appear in “Gloria,” about making it in the publishing world, no matter the cost. (Carol Rosegg)
Arts & Culture

Opportunism to the max
By Diana Barth
biggersmaller
Print

But a harrowing event at the end of Act 1—a tragedy in fact—brings about a sea change in everyone’s behavior.

It turns out that many disinterested nonparticipants stand to profit from other people’s misfortunes and that this “real world” of publishing is rife with backbiting, competition, and greed. Apparently, the most ruthless opponent wins.

Further, the media often warps true events for its own greedy purposes. Of course, this all extrapolates from publishing and media to the world as sadly we all know it: politics, government, the justice system, even charitable institutions.

(In a major New York museum the name of a well-known person who was convicted of securities fraud graces a wing of this institution due to the man’s generous financial contribution. Well- or ill-gotten?)

But to the specifics of the play: Dean (Ryan Spahn) arrives late, suffering a hangover from last night’s housewarming party (which only he from the department had attended). It was given, with great effort, by unpopular colleague Gloria (Jeanine Serralles). Attractive Ani (Catherine Combs) is at her desk, as is intern Miles (Kyle Beltran), a young African-American attending Harvard who serves mostly as a gofer.

Apparently, the most ruthless opponent wins.
Kendra (Jennifer Kim) wanders in, late as usual, having returned from a typical shopping spree and her daily stop at Starbucks. Her sharp, vicious tongue makes others fear her. Her own boss is afraid to fire her because Kendra will only go elsewhere and cause trouble from afar.

Gradually the group’s inner jealousies and frustrations surface. Most sense they will never be promoted; they even fear being fired.

When Dean’s hidden proposal for his memoir is discovered, the others tease him, their envy poorly disguised. Is he aiming for a book deal?

Lorin (Michael Crane), recently promoted to fact-checking head, moans in an emotional, almost aria-like speech that because a little-known pop singer who recently overdosed on drugs has now been elevated to feature article status, he will now be overwhelmingly overworked. Nobody reads magazines for facts anyway.

Furthermore, other people will now make money on the increased sales of her CDs, but she herself will not profit. She’s dead! he cries.

You have to be dead to become important, he opines.

The dowdy, depressed-looking Gloria wanders in and out occasionally, for no apparent reason.

Then comes the horrific event.

Some months later, in Act 2, Dean and Kendra meet. They both have book deals resulting from the tragic event, and he wants her to sign an agreement that she will not criticize him in her book. An altercation develops and they leave as Dean’s former boss Nan enters with a new aide. Although Nan never witnessed the incident, she experienced enough of it and may go after a book deal herself.

Later, in a TV production company in Hollywood, it appears possible that Nan will win this competition. Not only will she have a book deal, but probably a TV deal as well.

Has a media frenzy developed from a harrowing event, so painful to many others?

“Gloria” has the benefit of a terrific artistic team, from director Evan Cabnet, to an extremely talented cast of six actors, many of whom double so convincingly that it’s difficult to detect the double.

Among these “doublers” are Catherine Combs, Kyle Beltran, Jeanine Serralles (in an astonishing Gloria/Nan), and Jennifer Kim, the last named offering an attention-getting intensity in this her off-Broadway debut. Ryan Spahn and Michael Crane do excellent work.

Takeshi Kata has created seemingly simple but unique sets, and Ilona Somogyi’s costumes are particularly on the mark, with the women’s garments being especially appealing.