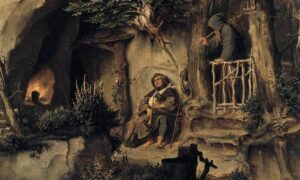 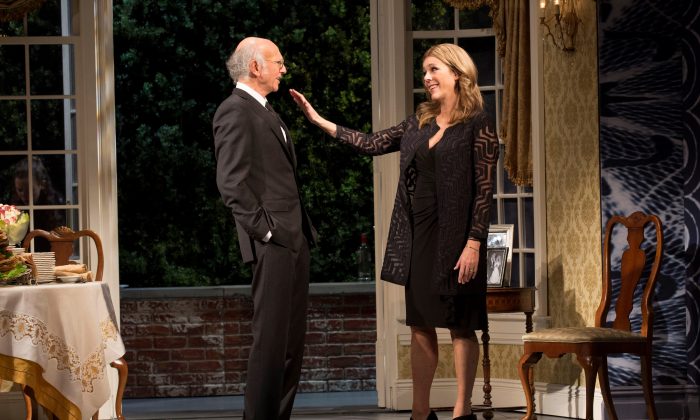 NEW YORK—As I set off to see “Fish in the Dark” at Broadway’s Cort Theatre, I wondered what I would encounter. I’d heard so much talk: Was it a classic Broadway comedy? A stage version of a TV sitcom? An egocentric, starring vehicle for TV writer Larry David, the co-creator of “Seinfeld”? And, is David really an actor?

After viewing the phenomenon, I reached certain conclusions: “Fish” is a farce, defined by Webster as “a light dramatic composition marked by broadly satirical comedy and improbable plot.” And Larry David, without whom there would be no production, is a farceur: “a writer or actor of farce.”

Whatever the definitions, David’s fans are craving this show. A blockbuster of an advance—said to be 13.5 million dollars—can’t be argued with. And it is funny and sometimes silly.

But actually if one digs beneath the gags and David’s outlandish interpretation—wide eyes and widely spread arms, as if bewildered by the goings-on—there are some deep and even poignant issues dealt with.

Norman Drexel (Larry David) and his wife, Brenda (Rita Wilson), are visiting the California hospital where Norman’s 85-year-old father, Sidney (Jerry Adler), lies dying. Joining the couple in the waiting room are Norman’s lawyer brother, Arthur (Ben Shenkman), who has had the “chutzpah” to bring an attractive date, Michelle (Jenn Lyon), a notary no less, to this somber occasion.

Larry David’s fans are craving this show.
Later emotional daggers are shot between Fabiana and Gloria because Fabiana resents Gloria’s patronizing treatment of her.

Norman and Brenda’s actress daughter, Natalie (Molly Ranson), replete with accent for her impending role in “My Fair Lady,” joins the group, along with her boyfriend, Greg (Jonny Orsini).

Sidney’s brash-mouthed brother, Stewie (Lewis J. Stadlen), and sister, the ditsy Rose (Marylouise Burke), round out the major components of friends and relatives, all of whom await the impending dire news.

Funny-sad incidents, which lard the script, include the noncommittal stance of both Norman and Arthur when queried by the doctor as to whether to put dad Sidney on a ventilator. The brothers seem not too anxious to prolong their father’s life.

Then there’s Arthur’s practical suggestion that the cheapest of caskets is the way to go. After all, when you’re dead, you’re dead.

When Norman, not being up on hospital etiquette, tries to tip Dr. Stiles (Richard Topol), the latter indignantly refuses. Later, Dr. Meyers (Joel Rooks) proves not so meticulous in his morals.

The old-fashioned ploys of a character fainting from shock or receiving “visitations” from the dead are just part of Larry David’s arsenal of shtick. (“Fish” is his first stage play.)

There’s a somewhat heated debate over who’s to get Sidney’s Rolex watch. But the major plot issue is who is mother Gloria to live with after Sidney dies?

Sidney insists she live with one of the brothers, but isn’t specific as to which one it should be. This prompts a not-so-subtle debate between the two men, each of whom try to avoid or evade this responsibility. It’s clear that the aggressive Gloria is not a favorite with either one of the brothers.

In this rollicking production, Larry David does his thing as only he can.
Several hilarious sequences involve Fabiana’s son, Diego (Jake Cannavale), being recruited to comfort Gloria, who has insisted that the young man resembles her husband, Sidney, when he was a young man. Gloria’s sly last line of the play indicates that she has been well aware of the joke all along.

In this rollicking production, Larry David does his thing as only he can. Without him, there’s no show, and his is the only role not understudied.

Others in the cast include Kenneth Tigar, Jeff Still, Maria Elena Ramirez, and Rachel Resheff.

Set designer Todd Rosenthal offers a nice touch: A drop curtain displaying an enormous death certificate appears prior to each scene. The date of death set for Sidney Drexel is March 7, 2015. That’s the date of the performance I attended. I assume that the date is reset for each performance, to keep things accurate, you know.

All is kept afloat and running swiftly and smoothly under the accomplished hands of director Anna D. Shapiro (“August: Osage County,” “Of Mice and Men.”)

But it is farceur Larry David’s show. After all, advances and enthusiastic audiences don’t lie. “Fish in the Dark” is a palpable hit.