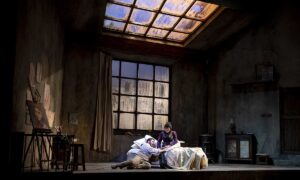 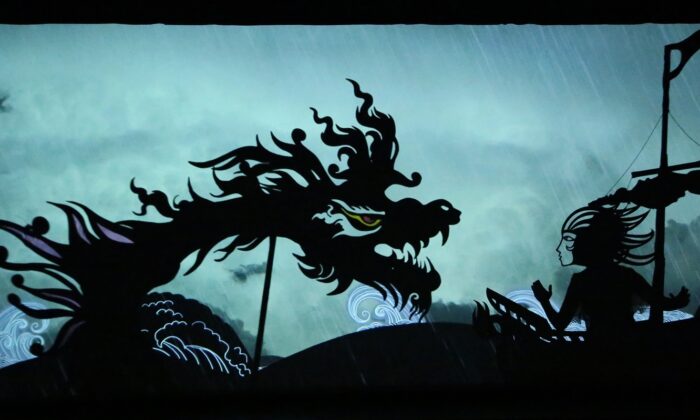 A scene from “Feathers of the Fire: The Movie” with Zaul, the hero, and the sea monster. (Fictionville Studio)
Performing Arts

“Feathers of Fire: A Persian Epic” is like a Disney fairy tale. It’s such an engrossing cinematic spectacle—exhilarating journeys, giant monsters, kings and queens, larger-than-life heroes, lovers lost and found, and an enchanting story about the triumph of love against all odds—that you’ll forget you’re watching a puppet show. That’s because “Feathers” is really more than an ordinary puppet show.

Originally presented as a play at the Brooklyn Art Museum (BAM) in 2016, “Feathers of Fire” has been transformed into a live-animation video by Fictionville Studio, and is now available for streaming on Vimeo.

Created and directed by Hamid Rahmanian, a filmmaker and visual artist (who once worked for the Walt Disney Company), the silver-screen film recalls Disney movies such as “The Lion King” and “The Jungle Book.” The story, which has hints of “Romeo and Juliet,” is taken from the “Shahnameh” (“The Book of Kings”), an ancient Persian epic poem written around the late 10th century by the Persian poet Ferdowsi.

In 2013, Rahmanian adapted a portion of the epic into a beautifully illustrated book for a modern audience, and then decided to extend the adaptation into an entrancing theatrical puppet show, which played at the BAM in 2016. He has turned it into a video presentation available for all.

“Feathers” begins with the birth of Zaul, an unwanted albino son, who is abandoned by his father because of his unusual appearance. Zaul is rescued and raised by a magical bird, the Simorgh. When Zaul returns to his homeland, Simorgh gives him three magical golden feathers to burn in case he ever needs her, which he does when he falls in love with the forbidden Rudabeh.

The ancient tale is an escape into another world and another time, told using specially designed shadow puppets, masks, costumes, and animated backdrops. The images transport us effortlessly to charming fantasy landscapes: raging rain-swept seas, soaring mountains, hordes of marching soldiers—all of which necessitate split-second timing with light and video settings that are projected through 160 shadow puppets (created from cardboard and colored celluloid) and over 100 digitally animated scenes.

Unlike in most shadow theater, the imagery is not limited to 2D projections. Actors, in compelling performances, wear masks so that their bodies are in silhouette and their heads appear to be those of the shadow puppets.

While the puppets and masks are stunning, the real bewitching aspect of “Feathers of Fire” lies in the vast collection of backdrops and digital projections that provide a sense of depth, movement, and detail. From city to country to fauna and flowers in rainbow colors to explosive fireworks, from astronomical saucers spinning in the heavens to towering waves crashing and cresting on the sea, every image is more breathtaking than the last.

Viewers not only can watch stunning entertainment but can also get a glimpse of what happens behind the camera and enjoy the process of creation as the puppet extravaganza is prepared for presentation to a theater audience. Rahmanian and a talented troupe of artists have collaborated on this marvelous spectacle.

Delivering the silhouetted shadows is Larry Reed, and the dazzling technical magic is by Mohammad Talani, who programmed the digital animations, backgrounds, and choreography for the two projectors that heighten the illusion of movement and depth. The film also features an evocative original musical score by Loga Ramin Torkian and Azam Ali.

Although “Feathers of Fire” must have been extraordinary when it was first presented on a theatrical stage, it’s hard to believe that it could have been more spellbinding than it is in this extraordinary video stream. Indeed, because everything in the film moves so seamlessly and realistically, “Feathers” may be more compelling and more seductive on screen than it was on stage.