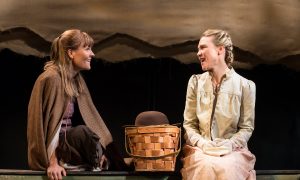 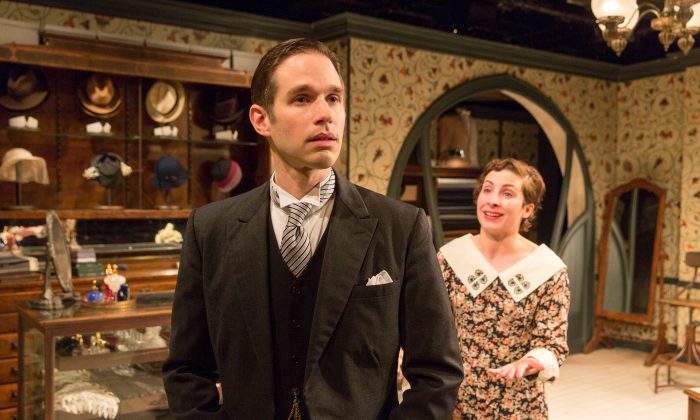 Peter Juhasz (Joe Delafield), the nicest guy in the world, is having trouble with both his wife (Annie Purcell) and his finances, in “Fashions for Men,” a Ferenc Molnár piece revived by the Mint Theater Company. (Richard Termine)
Arts & Culture

“Fashions for Men” came from the fertile imagination of the prolific Ferenc Molnar, who penned 42 plays, including the lovely “Liliom,” (which later metamorphosed into the musical “Carousel” via Rodgers and Hammerstein), as well as journalistic pieces, short stories, and novels.

The shop in “Fashions” is owned by Peter Juhasz (Joe Delafield), the nicest guy in the world—so nice that he will soon go bankrupt if he doesn’t stop extending credit to just about anyone.

Among his assistants is his wife, Adele (Annie Purcell), who, after an excruciating, soul-searching explanation, informs Peter that she is about to leave him. She’s running off with super-salesman Oscar (John Tufts)—along with Peter’s savings—funds that would have saved the shop.

Although upset, the forgiving Peter shrugs and makes the best of a bad situation.

Director Davis McCallum has turned particular attention to the subtle details of various relationships, which enhance the fabric (no pun intended) of the piece.
Now bankrupt, Peter goes to work as estate manager for his former benefactor and customer, the middle-aged Count (Kurt Rhoads), in the latter’s cheese factory. As evidence of the location, a cow’s portrait graces the walls of the estate’s office, and a moo—courtesy of sound designer Jane Shaw—is heard whenever the door to the outside is opened.

Peter has been followed here by his former employee, the attractive but devious Paula (Rachel Napoleon), who is determined to entrap the wealthy Count. Peter, ever dense as to what’s going on, inadvertently interferes with the flirtation of the other two. But things do develop.

In the third act (yes, there are three acts, but so wittily enacted that the production never flags), we’re back in the shop. Oscar, now quite bedraggled, enters, pleading for his old job back. Paula, elegantly attired, enters and implies she’s about to come under the full protection of the Count. But at the last minute a turnaround ensues, and it appears that all parties will attain their desires.

Interspersed between the personal stories are visits from a variety of customers, wonderfully played by Annie Purcell, Maren Searle, Jill Tanner, Gabra Zackman, and Mark Bedard.

Theater Review: ‘Abundance’
Also delightful are employees such as Philip, who cynically observes all the goings-on at the place (a nice turn by Jeremy Lawrence), and two others, played by John Seidman and Michael Schantz. The broad range of these characters adds to the excitement and electricity generated by the play.

Not to be overlooked are the gorgeous women’s costumes (by costumer Martha Hally), which make one wish that present-day designers would take a lesson from the lovely fabrics and individualistic and flattering styles of yesteryear. Robert-Charles Vallance has supplied authentic period wigs and hair styles.

Artistic director of the Mint Theater Company, Jonathan Bank, has rewritten some of the dialogue, making it flow smoothly and swiftly.

All is coordinated under the astute directorial eye of Davis McCallum, who has turned particular attention to the subtle details of various relationships, which enhance the fabric (no pun intended) of the piece.

“Fashions for Men” marks another worthy addition to the oeuvre of the Mint, which specializes in uncovering and presenting theatrical gems of the past that have been overlooked.