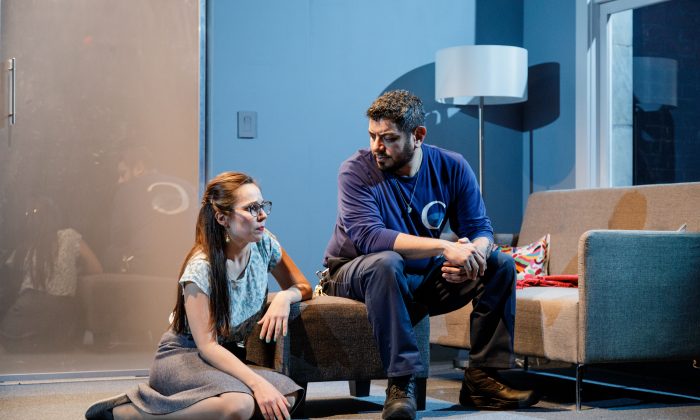 Supporting or using one of your own
By Diana Barth

NEW YORK—Playwright Tanya Saracho has taken on the provocative topics of ethnicity and class in her 100-minute two-hander “Fade,” now playing at New York’s Cherry Lane Theatre under the auspices of Primary Stages.

Class, and how it impinges on people’s lives, is far the more interesting topic, as displayed by Lucia (Annie Dow), a somewhat uppity, upper-middle-class, Mexican-born American, and Abel (Eddie Martinez), a Los Angeles-born lower-class Mexican.

Lucia, a novelist who has recently arrived in Hollywood by way of Chicago, is first seen moving in to her cubby-like office at a film studio; she’s been hired to write for a TV crime series. Little does she know, at first, that her hiring came about to satisfy the diversity requirement.

Because of a frequently collapsing bookshelf in her office, she enlists the aid of the maintenance man, Abel. Their similar yet different backgrounds draw them closer, and Lucia happily finds a sympathetic ear in Abel for her worries and complaints.

He, on his part, remains impersonal and somewhat aloof. Being on the lower echelon, he knows his place. He feels Lucia is a princess type (she admits to having had a maid in Mexico) and refuses to be drawn in by her.

Lucia must attend daily meetings “upstairs” with the group of older white male writers who seem to be in on something she can’t comprehend. Her boss ignores her; she has no writing assignment. The men make fun of her: one calls her Sofia Vergara. “He can’t even pronounce it right,” she fumes.

One day, her boss insists she translate his orders to his Mexican maid because he can’t communicate with the woman. Lucia realizes she’s “his translator!”

Over time, she manages to get an edge in on the job and things begin to roll her way—particularly because the usually reticent Abel has opened up to her about his own, somewhat hairy background: as a Marine, as a fireman, and as a husband possibly involved in a justified marital abuse incident.

Abel represents a gold mine to Lucia. He educates her about life in his dicey part of town, all material she can use in her writing. Now having the material she needs to fill out her recently assigned script, she can finally advance in her career!

The play’s ending is abrupt and unsettling. A lot of stage time has been spent at the beginning dealing with the differences between the two, discussions without much relevance to the remainder of the play.

More could have been developed on the subject of class, which is so potent and seldom addressed in our society. I’m reminded of a remark a recent voter made about President Donald Trump: “He’s a rich guy, but I can talk to him.” How potent indeed is communication.

A plus is the fact that Saracho has not brought in the subject of the glass ceiling regarding the hiring of women. As a successful TV writer (“Girls,” “Looking,” “How to Get Away With Murder”) as well as playwright, she may not have experienced that difficulty.

The performances, under the direction of Jerry Ruiz, are both fine and give the script more dimension than is tangibly evident in the spare writing. Martinez particularly lends warmth and compassion to the role of Abel.

Annie Dow’s Lucia is the more difficult role, demanding more colors. Her role is written somewhat unsympathetically, but since we all have more or less noble motives for our life choices, perhaps something positive could have been inserted regarding Lucia’s need for success at any cost—or maybe not. Maybe it’s good to be kept guessing.

Perhaps it is because of unanswered questions and a bit of teasing by the playwright that “Fade” is a good bet for an evening at the theater.