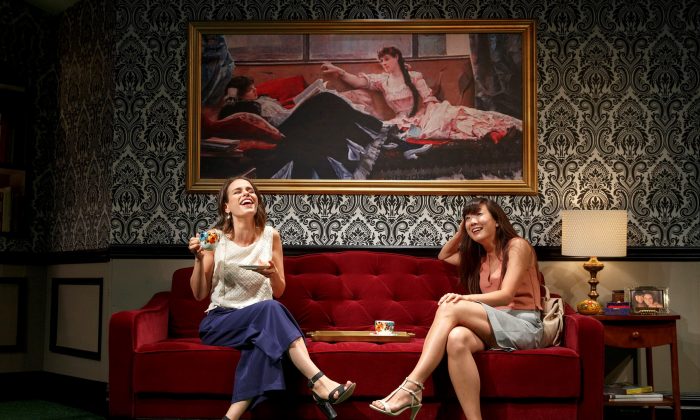 NEW YORK—On reading a reviewer’s script of Lucy Teitler’s “Engagements,” I thought: “Dear, another contemporary, hippy-dippy work. And I’ve got to schlep to the Upper West Side to see it.” However, I was startled to encounter a remarkable, taut, spicy satire of contemporary manners.

The insights are revealed to us as experienced by classical literary scholar heroine/antiheroine Lauren (Ana Nogueira). Like with so many people, her character seems to be changeable.

Set in Boston today, “Engagements” follows Lauren and her best friend, the beautiful Allison, a true-blue heroine (Jennifer Kim), as they weave their lives around men and manners.

Allison waxes ecstatic about her boyfriend, Mark (Michael Stahl-David) and gets engaged to him. But Mark soon makes a play for Lauren.

Furthermore, Mark offers to live a double life; he would marry Allison, but always be able to relate, in the scruffiest meaning of the word, to Lauren.

A slew of contemporary customs and relationships are cannily set on view by the playwright.

Lauren, appalled by Mark’s offer, tries to figure out how to let Allison know of Mark’s disloyalty without revealing her own complicity in the not very savory events that have taken place between the illicit couple.

A series of engagement parties follows, with a slew of contemporary customs and relationships cannily set on view by the playwright.

Allison, always gorgeously attired (in up-to-the-minute costumes by Beth Goldenberg), doesn’t want to eat meat on a stick that might drip onto her blouse; besides, she is a former vegetarian and misses that style of gastronomy. She advises Mark that gin cocktails are passé—only vodka will do. But she changes her view midstream by deciding that vodka’s been around too long, and we should go back to gin.

Lauren receives a planned visit by her cousin Catherine (Brooke Weisman) with her boyfriend Ryan (Omar Maskati) in tow. Lauren, who has completely forgotten their arrangement, offers some coins to Catherine, thinking she is collecting contributions for some organization. After noticing the unwanted and sparse gift of three nickels, Catherine finally gets her message across to Lauren.

When Catherine notices on an end table a small box containing several small balls, Lauren offhandedly remarks that some unknown person has been sending her suggestive gifts from time to time.

Now Ryan’s investigative nature has been piqued, and he sets about to find out who the mysterious donor might be. Is he a stalker, and possibly dangerous to Lauren?

The ultimate solution of the mystery throws the whole set of characters into free fall, with a resulting unexpected and striking changing of partners. Just like sometimes happens in real life. To some of us.

Along the way we are treated to some terrific and imaginative staging by director Kimberly Senior, including several sharp and beautifully executed dance sequences by the cast.

As mentioned, Kim is beautiful, and runs the gamut from a bored, confident sophisticate to a ruffled, heartbroken loser.

Nogueira packs high energy and passion into the aggressive but concerned best friend, while Stahl-David goes with ease from unappealing dork type to smarmy bad guy. But like so many bad guys he succeeds in the end, giving Weisman’s sometime befuddled Catherine a chance for a new life, of sorts, in “boring” Boston.

Maskati lends a sense of wit and exoticism to the role of Ryan, occasionally inserting some quirky surprises.

Another major player that I cannot omit is the set by Wilson Chin, which is both provocative and soothing, an odd but strangely appealing combination.

Theater Reviews: ‘No End of Blame: Scenes of Overcoming’ and ‘Good’

Lighting design by Jen Schriever effectively complements the set, as does sound design by Ryan Rumery.

“Engagements” had its world premiere at the Barrington Stage Company in Pittsfield, Massachusetts, last year. Its present presentation at New York’s 2econd Stage Theatre Uptown marks a coup de theatre, one might say. See it if you can.