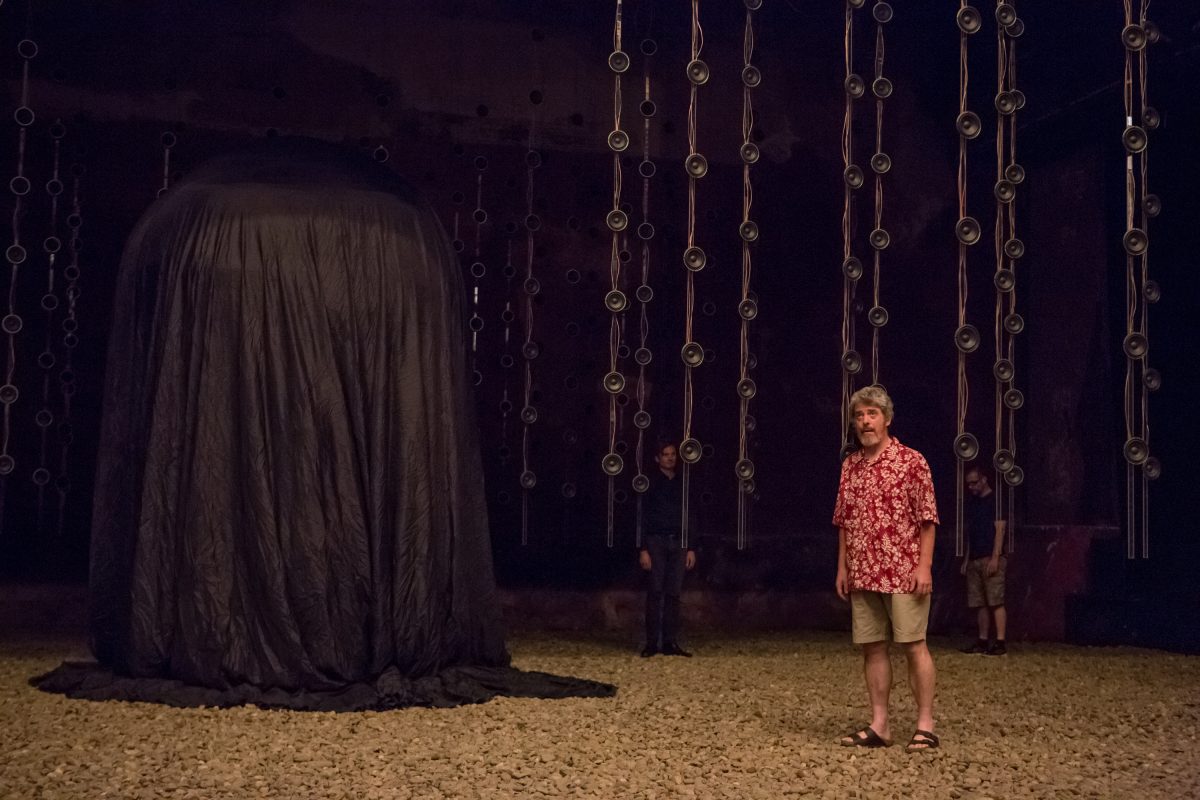 NEW YORK—Samuel Beckett takes the audience through a tour of the remnants of one man’s life in Embers. Originally performed in 1959 as a radio play, it recently was recently staged by Pan Pan Theater at the Brooklyn Academy of Music as part of its “Next Wave Festival.”

As night falls on a beach, Henry (Andrew Bennett), an aging and empty man, looks back on the wasteland his life has become. His marriage has long since lost its romance; he’s apparently estranged from his daughter; his career as a writer has gone nowhere; and basically he has never been able to finish anything he’s started.

He’s also never come to terms with how his own father died years earlier. His dad perished either by drowning or suicide. “They never found your body,” Henry notes at one point.

Henry has long wanted his life to change but lacks the drive it to make it happen. Even his half-hearted attempts to reach out to his wife, Ada (Áine Ní Mhuirí), are rebuffed. She tosses in her own thoughts and impressions during Henry’s continual musings.

Just about all Henry can do, it seems, is talk. His ramblings never rise to the level of insights, yet offer a convoluted but fascinating road for the audience to follow as they begin to know him and his situation.

What’s really interesting here are the depths of loss and emptiness Beckett conveys with his dialogue—words which also indicate the inexorable march of time. It’s an idea Beckett explored in many of his works, such as Krapp’s Last Tape. The protagonist is caught on a Mobius Strip of his own making while seemingly unable to alter whatever is still to come.

An integral part of the Pan Pan production was the show’s set. A gigantic three-dimensional skull, wonderfully designed by Andrew Clancy, was placed in the center of the stage. The actors’ faces are visible at times through the skull’s eye sockets.

There were also, according to the program notes, “562 miniature disc-shaped speakers…attached to a series of transparent polycarbonate strips” reaching from the stage floor to ceiling. While serving a functional purpose, the speakers also called to mind a forest of teardrops, or perhaps memories coming from the depths of a despairing soul.

Bennett and Mhuirí did a great job in bringing to life Beckett’s words, while creating images of their characters in the audience’s minds. The actors are only seen briefly in the beginning as two people wondering aimlessly along the beach. They are simply waiting to die and look back on the life they’ve led and the choices they’ve made—all of which amount to little.

Direction by Gavin Quinn was strong, moving the action along beat by beat. The feeling achieved is akin to someone slowly peeling an onion, each time revealing the next layer of emptiness and continuity underneath.

The various technical elements come together to add to the piece’s overall sensory experience. The lighting effects by Aedin Cosgrove, alternatively illuminating different parts of the skeleton, was excellent and the sound design by Jimmy Eadie was quite realistic. We quickly get the feeling of the waves just out of sight.

Probably the most important thing about this production of “Embers” was that it was never boring. Clocking in at 55 minutes, it offered a cautionary warning for those who feel they have all the time in the world to make things right. As Beckett shows all too clearly, you don’t.