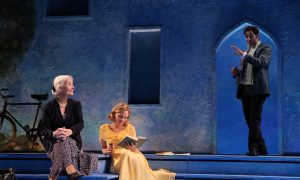 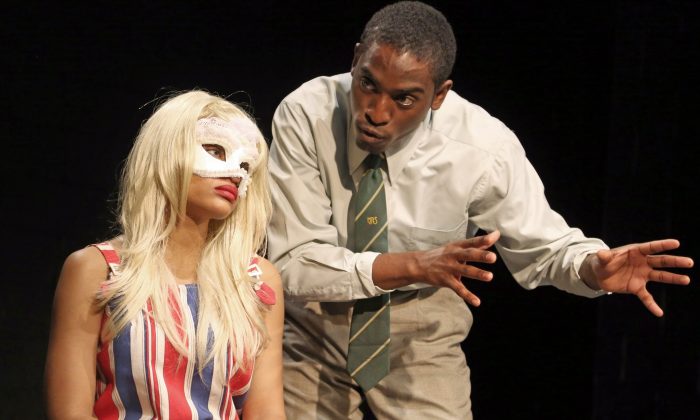 NEW YORK—This ominous one-act by Amiri Baraka features a mixed couple on a New York subway train. According to the theater’s website, the title “Dutchman” alludes to the most notorious slave ship company in the 17th century, the Dutch East India Company.

Prior to opening curtain, we see projections of the interior of subway cars flashed onto the stage with accompanying sounds of trains (projections and sound by Bill Toles). Also heard is passionate music from Richard Wagner’s “The Flying Dutchman.”

Moments later, Lula not so much as enters the car, she sidles in, fiercely biting into a large red apple as she seductively eyes Clay. Taken aback, Clay can only stare at her.

Although the car is empty, she invites herself to sit down next to him, and the duet begins.

Their conversation is at first neutral, except for Lula behaving in an obviously sexy manner. She offers Clay an apple, which he accepts. It is apparent that this piece of fruit represents The Apple of biblical meaning.

The conversation becomes a kind of Ping-Pong game with Lula alternately seductive, then insulting.

The conversation becomes a kind of ping-pong game.

Clay mentions that he is to attend a party. Lula begs to be invited. Now he plays cat and mouse.

She pretends to be insulted when he rejects her. But she always regains the upper hand.

Clay tries to maintain his emotional equilibrium, but one can see that he is gradually succumbing to her relentless goading.

Three other men enter the car. They are obviously African-American, but wear white full facial masks. It is not clear whether they represent white men or dead black men, as each is described in the program notes as Ghost Subway Rider. They sit at a reasonable distance from the couple, staring straight ahead and not reacting to the couple’s discussion.

Later, a nondescript middle-aged African-American man enters and sits, as does an African-American woman, each described as Negro Subway Rider. They too do not participate in the proceedings.

Finally, the tension between Clay and Lula grows to the point of extreme dissension, and he gets up to leave. At which point an unexpected and fatal act of physical violence toward Clay on Lula’s part takes place.

Soon a young Negro man enters the car. Lula smiles and offers him an apple. End of play.

Under the direction of Woodie King Jr., who is the founder and producing director of New Federal Theatre, Michael Alcide and Ryan Jillian Kilpatrick bring Clay and Lula to vivid life.

The set is by Chris Cumberbatch and costumes by Carolyn Adams. Actress Kilpatrick has done double-duty by creating the masks.

In May, the New Federal Theatre plans to produce the world premiere of the last play written by Amiri Baraka, “Most Dangerous Man in America,” at the current venue.

Amiri Baraka enjoyed a remarkable literary career. Born Everett LeRoi Jones in Newark, N.J., he worked in magazines, wrote poetry and plays, and sprang to prominence as a playwright with the production of “Dutchman” at Cherry Lane Theatre in New York in 1964.

After winning an Obie Award for Best Play, controversial “Dutchman” was subsequently made into a film and has been produced around the world. Among his many achievements he was former Poet Laureate for New Jersey. Amiri Baraka died in January 2014.