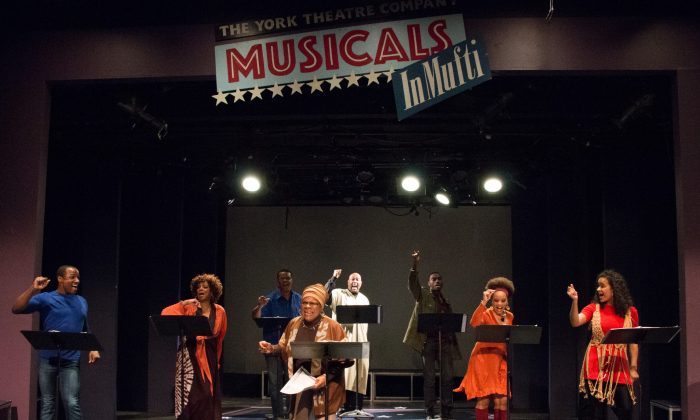 NEW YORK—When “preacher” Doug Eskew launches into “I Gotta Keep Movin'” at the start of “Don’t Bother Me, I Can’t Cope,” you know you’re in for an evening of foot-stompin’, hand-clapping entertainment. But not always.  Some of the numbers are quieter and thoughtful and help illustrate the African-American experience in a way that’s often moving and never angry. It combines gospel, jazz, soul, and calypso.

Now performed for a brief run in a “concert format” (scripts in hand but seldom referred to) by The York Theatre Company, this show, conceived by Vinnette Carroll,  enjoyed a two-and-a-half year Broadway run in the ’70s. It was the first Broadway musical written entirely by a woman: Micki Grant, who was also featured in the original cast.

It’s much easier to accept ideas of political or societal problems in a musical.

Here, under direction of Leslie Dockery, a handsome company of eight singer-dancer-actors more than fills the bill. Debra Walton and ensemble sing out “Goin’ to Town This Morning.” On a more serious level, Raun Ruffin sings “Lookin’ Over From Your Side.”

Marva Hicks and terrific dancer Devin L. Roberts put over “You Think I Got Rhythm,” while the mature Tina Fabrique lends her talents to “The Billie Holiday Blues,” “All I Need,” “Fighting for Pharoah,” and to a moving duet with young Darilyn Castillo in “It Takes a Whole Lot of Human Feeling.” Darilyn also projects a lot of warmth in her rendition of “Questions.”

Jelani Alladin delivers a powerful “My Name Is Man,” and Doug Eskew puts forth a commanding rendition of “Good Vibrations” and helps close the show with a lusty reprise of “I Gotta Keep Movin’.”

There is much more, and most of the numbers feature the input of the entire ensemble. Also of note: The performers are not miked; their powerful, exuberant voices fill the theater.

A talkback after the show featured none other than Micki Grant herself, as well as cast and technical personnel, receiving questions and comments from the audience. One audience member noted that, sadly, some of the problems presented by the show’s content still hold true today.

Ms. Grant agreed to an interesting point made: It’s much easier to accept ideas of political or societal problems in a musical, rather than in a straight, legit play.

The York Theatre Company, dedicated to the development of new musicals (“Cagney,” produced here last season, will move to the off-Broadway Westside Arts Theater in the near future) and preserving musical gems from the past, is presenting “Don’t Bother Me” as the first in a two-part series titled “Musicals in Mufti.”

Second in the series, following later in March, will be “Starting Here, Starting Now,” music by David Shire, lyrics and direction by Richard Maltby, Jr.

Diana Barth writes for several publications, including her New Millennium, an arts publication. She may be contacted at DiaBarth@juno.com