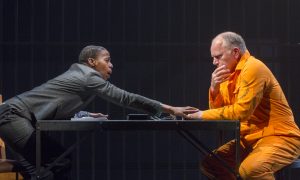 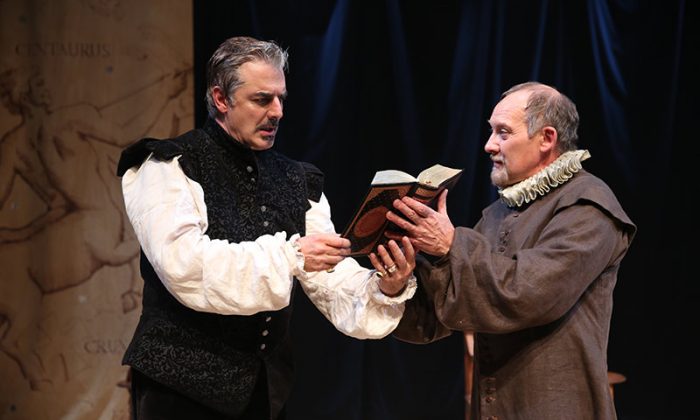 Gaining all the world, as well as everlasting hell
By Diana Barth
biggersmaller
Print

NEW YORK—Christopher Marlowe’s “Doctor Faustus” is being offered by Classic Stage Company (CSC) in an adaptation by David Bridel and Andrei Belgrader. The latter also directed.

In 15th century Germany, Dr. Faustus (Chris Noth), a gifted scholar, has become disenchanted with conventional topics and wants to address himself to necromancy—black magic. His friends Valdes (Carmen M. Herlihy) and Cornelius (Geoffrey Owens) urge him on.

Soon Mephistopheles (Zach Grenier) joins Faustus and informs him that he will do anything for Faustus that he desires. First Mephistopheles must get permission from the devil, Lucifer (Jeffrey Binder), but soon the deal is set.

Faustus must, however, sign a pact in blood, agreeing that after a term of 24 years, Faustus’s soul will become the property of the devil. No problem, Faustus asserts. He is eager to get started.

The Good Angel urges Faustus to repent before it is too late; the Bad Angel urges him onward.
Faustus is a bit taken aback when certain forces suggest he be more cautious about such a decision; his blood even congeals at one point as he is writing the pact. But Mephistopheles calmly brings hot coals to let the blood flow smoothly again.

The Good Angel urges Faustus to repent before it is too late; the Bad Angel urges him onward. Besides, Faustus is looking forward to his experience.

Lucifer warns that henceforth Faustus must never talk of Christ, but of the devil.

The Seven Deadly Sins are exhibited. There is a wild scene involving audience participation, when certain audience members are brought onstage as the cast gapes. When a particularly attractive young woman is brought onstage, at first she seems puzzled and uncertain. Then she breaks into a wild, lascivious dance. It turns out that she is a member of the cast (Marina Lazzaretto), who later plays Helen of Troy.

As the play winds forward, Faustus experiences marvels and sees the great sights of the world. In Rome, he commands Mephistopheles to bring the Pope to him, then Faustus insults the Pope. It becomes clear that his experiences are becoming wearing to him rather than invigorating. And the 24-year limit is approaching.

Older scholars try to save Faustus, but Lucifer is too strong.

In the final scene, Faustus pathetically cries out, “I’ll burn my books!” as he is finally condemned to hell.

I am paraphrasing, but the famous remark applies: “What shall it profit a man to gain the whole world if he must give up his soul?”

Theater Review: ‘A Human Being Died That Night’
Under Andrei Belgrader’s direction, performances are fine.

Although Christopher Marlowe was said to have been an atheist, the play has strong religious overtones. It also moves us from the Middle Ages, when man was tied to a feudal lord and the church, to the Renaissance, when a man’s progress was up to his own ambition or power.

Marlowe greatly influenced Shakespeare and left his own remarkable legacy of work, including “Tamburlaine the Great,” “The Jew of Malta,” and “Edward the Second,” before being killed in a tavern brawl at the age of 29.

Diana Barth publishes New Millennium, an arts publication. She may be contacted at diabarth@juno.com