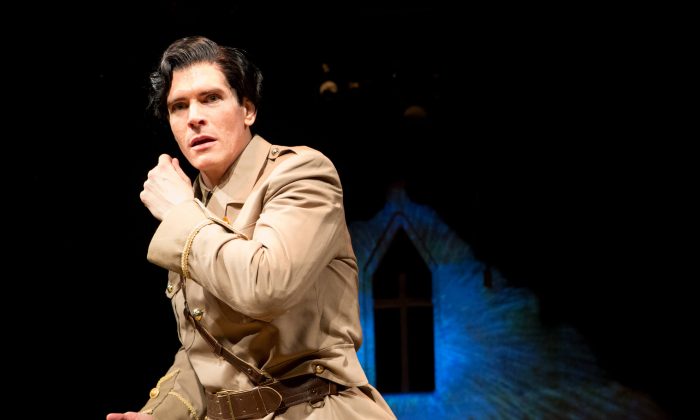 World War I, through the eyes of poets
By Diana Barth
biggersmaller
Print

NEW YORK—Britishers Siegfried Sassoon and Wilfred Owen were arguably the greatest war poets of World War I. Playwright Joseph Pearce has created a theater piece interweaving excerpts from these poets’ works, as well as those of other poets, in addition to his own original text.

Sassoon and Owen became fiercely antiwar after their bitter experiences in the trenches and expressed these feelings in their work. Sassoon fortunately outlived the war and went on to live until he was 80. Less happily, Owen was killed in the war just one week before Armistice was declared. He was only 25, yet left a legacy of deeply felt poetry.

In the play, another character is been introduced: It is Death, portrayed by actress and dancer Sarah Naughton. Death is sometimes threatening, sometimes seductive. She sometimes cynically sings: “Pack up your troubles in your old kit bag, and smile, smile, smile.” But Sassoon, as nicely played by the nimble Carriere, always manages to escape her grasp.

Sassoon publicly opposed the war. He, in fact, delivered a speech in Parliament to that effect, and it was thought he would be court-marshalled as a result, and possibly face a firing squad. Fortunately, he was rescued, in a sense: He was sent to a military hospital in Scotland where it was hoped he “would recover his senses.” It was there that he met and befriended Owen.

The verses written by both men interspersed throughout the play are typically brief. From Owen’s pen, lines like: “No passing bells for those who die as cattle/Only the monstrous anger of the guns./Only the stuttering rifles rapid rattle can patter out their hasty orisons.” Sassoon had written: “Sneak home and pray you’ll never know/The hell where youth and laughter go.”

Playwright Joseph Pearce has described the piece as a “dramatic verse tapestry,” as it includes lines by other poets including Gerard Manley Hopkins, Thomas Gray, Edith Sitwell, and Pearce himself.

Somewhat confusingly, it is not indicated in the performance where these other poets’ works, or that of others, are placed. I recognized, for example, a line from T.S. Eliot, “April is the cruelest month, breeding/Lilacs out of the dead land,” was simply intermixed with the play as a whole.

In spite of the subject matter, the overall effect of the piece is not entirely somber. The latter segments indicate a reaching for faith and an inner peace to help mitigate the emotional ravages of war, which in the case of World War I dealt with the brutally unpleasant experiences of trench warfare.

Director Peter Dobbins has done a yeomanly job of lifting words from paper and translating them into a staged, theatrical whole, with the assistance of choreographer Jennifer Delac, who supplied dramatic dance movement for performer Sarah Naughton.

Carriere makes an interesting impression as Sassoon, as the actor is classically handsome, a rarity nowadays. (It’s possible to see him in a heroic mold in a classic play.) Michael Raver makes a quiet impact in the smaller role of Owen, imbuing the character with great sensitivity. Naughton does well in her triple task of actor, singer, and dancer.

“Death Comes for the War Poets,” though off the typical beaten path for an evening of theater, leaves a compelling and thoughtful aftertaste.

This world premiere presentation has been co-produced by Blackfriars Repertory Theatre and The Storm Theatre.