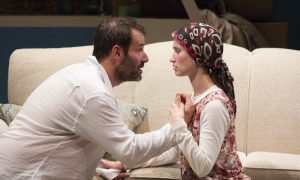 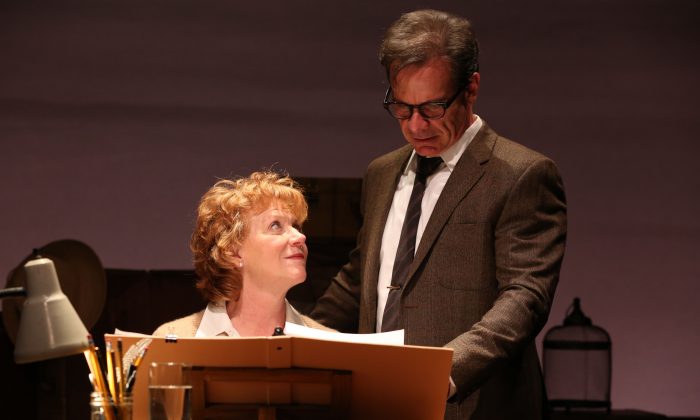 NEW YORK—In truth, I had set out to see a performance of the reading of two poets’ letters to one another, not expecting much. In fact, “Dear Elizabeth,” by Sarah Ruhl, proved to be one of the most moving and fascinating theater pieces I’ve experienced in a very long time.

The text is a compilation of a selection from the hundreds of letters (around 800) that noted poets Elizabeth Bishop and Robert Lowell had written to each other over a long expanse of time.

Their correspondence began in a restrained fashion.

The two were, at the least, great friends. Did they love one another? Yes, when one considers the many forms that love may take. They certainly had the highest respect for one another and each other’s work.

Robert appears to have loved Elizabeth romantically and proposed marriage to her at one time. Elizabeth, however, rebuffed him and made it clear that it would never be. But Elizabeth never ceased to love Robert, in her fashion, and supported him in every respect till he died.

Their correspondence began in a restrained fashion with Elizabeth making the first approach. She had admired Robert’s work and wanted to meet him, if that were possible. Robert, an admirer of Elizabeth’s work, was willing, and the two did eventually meet, shyly and formally.

As the two were often in separate locations, their relationship continued and grew stronger and more intimate by mail. Sometimes the content of the letters was mundane; sometimes they treated more serious subjects.

The two would read each other’s works-in-progress, sometimes discussing them in detail. Elizabeth once chided Robert because he had dared to mix fact with fiction, a dishonest and forbidden tack.

But primarily, each spoke of the other’s work with great admiration.

He urged her to attend Yaddo, the noted artists’ colony, which he had once attended. She finally went, but when she did, she found herself almost the sole attendee with only one very boring fellow whom she could hardly wait to escape from.

There came a very powerful development in Robert’s life. He had come to be attracted to fellow poet Elizabeth Hardwick.

According to one of Elizabeth Bishop’s letters, Hardwick set her cap for Robert. The two married. It’s implied by the placement of playwright Ruhl’s selection at that point that the marriage of Hardwick and Robert may have been the impetus for Elizabeth to set sail for Brazil, where she spent most of her life.

The letters contain a depth of intimacy that can only be found with people who have a similarity of soul-ness, if such a word can be invented. Then, too, there is something to be said for being able to express oneself more deeply in the written word than face to face, when there are deep or painful matters one must or wishes to deal with.

But as “Dear Elizabeth” is a theatrical presentation, physical elements must be mentioned. The project was set up so that different pairs of actors portray the two poets for one week only.

I had the privilege of witnessing two remarkable actors: Becky Ann Baker and Peter Scolari as Elizabeth and Robert. In the small off-Broadway McGinn/Cazale Theatre (the new home for the Women’s Project), every flicker of the eye, every intake of breath can be seen. And here every attitude, every mental state was on the mark.

Baker was alternately reticent, passionate, stubborn, and sad. Scolari presented a complex portrait of a man with dignity, subtlety, and a stoical masking of emotional pain.

Of course, these terrific results can’t be accomplished without the participation of an equally remarkable director at the helm. This has been realized with Kate Whoriskey, who not only guided her actors in their emotional journey but introduced small but telling physical details, such as having the onstage Stage Manager place a carnation in Robert’s jacket buttonhole during his “wedding.”

The Stage Manager is portrayed by Polly Noonan at each of the six week’s offerings.

By the time this review is published, Baker and Scolari will no longer be performing. But one will have the opportunity to see other pairs of notable performers during the weeks of Nov. 16 (Cherry Jones and David Aaron Baker), Nov. 23 (Ellen McLaughlin and Rinde Eckert), and Nov. 30 (Mia Katigbak and TBA).

Diana Barth writes for various publications and publishes New Millennium, an arts publication. She may be contacted at DiaBarth@juno.com