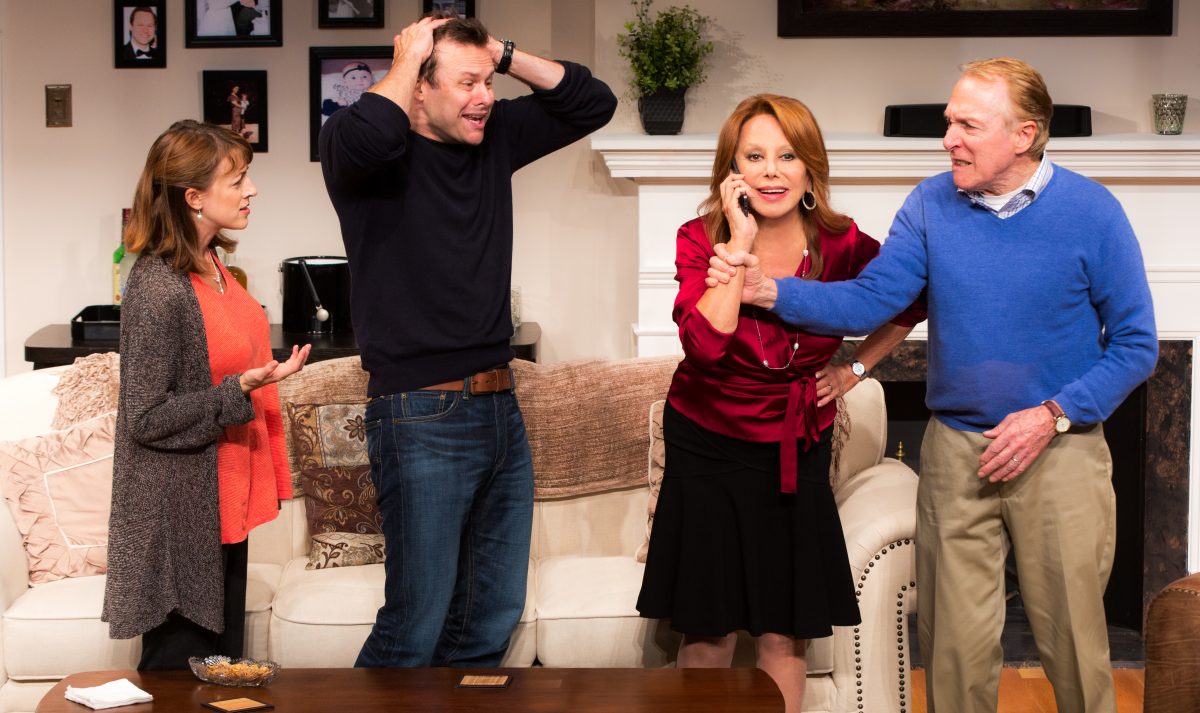 (L–R) Jane (Kate Wetherhead), Billy (George Merrick) are happy new parents, or are they? Grandmother Alice (Marlo Thomas) is going to step in and fix everything (or is she?), while grandfather Bill (Greg Mullavey) helplessly watches. (Matthew Murphy)
Arts & Culture

Not quite clever enough
BY Judd Hollander TIMENovember 2, 2015 PRINT

Like many longtime married couples, Bill (Greg Mullavey) and Alice (Marlo Thomas) can easily pick up on the feelings of the other and know if something is amiss. Alice quickly does so when Bills tries to hide that their married son, Billy (George Merrick), is having an affair with Jasmine, his much younger fitness trainer.

Determined to save her son’s marriage, Alice invites Billy and his wife, Jane (Kate Wetherhead), to come by that evening for a seemingly casual evening of coffee and cheesecake; in actuality, it is so they can have a serious talk. However, as is often the case in situations like these, things don’t work as planned.

Alice finds herself bringing up a long-ago incident in her own past, forcing all present to re-examine their relationships with one another and attempt to pick up the pieces before something they once took almost for granted becomes broken beyond repair.

DiPietro has written an interesting deconstruction of a marriage with each of the four participants having their say on the subject.

With the recent arrival of their first child, Jane has spent so much time trying to be the perfect mom (reading the latest Internet studies, continually dismissing possible candidates for a nanny position, and seriously considering quitting her job and staying home full time) that it has caused Billy to feel completely left out.

Jane’s absorption is what drives Billy to his gym in search of an outlet, where he meets and seemingly falls in love with Jasmine.

With Bill having no luck in making his son face his responsibilities by offering some hard truths about marriage, it falls to Alice to come up with a rather unexpected solution to the problem.

The theme about the realities of marriage, which the play keeps coming back to, is the ultimate message by the playwright. No one is happy all the time; responsibilities to your significant other and to your children are part and parcel of the marriage experience.

Neither DiPietro’s script nor David Saint’s direction takes the basic idea and makes it memorable.

The premise of Alice’s long-concealed secret works well as a vehicle for that message—especially in the beginning. At that point, one can’t tell if the incident actually happened or if Alice is just making it up to espouse some truths she’s learned during her years of married life. Had this uncertainty continued throughout, leaving the audience to figure out the answer, the show would have played at a much higher level than what was actually presented.

Ultimately, however, the subject matter is treated too broadly at some points and too rushed in others with a feeling of needing to tie everything up in a nice neat package by the end of the play.

Neither DiPietro’s script nor David Saint’s direction takes the basic idea and makes it memorable or different from any other innumerable comedic works on marital infidelity.

In addition, the characters feel too much like stock figures without depth or individuality. Even the dramatic moments don’t register as strong or fresh. It would have been nice, for example, to look a little deeper into the character of Bill, who comes off as the most one-dimensional of all, yet being the one affected the most by what happens.

It also would have been good to introduce the character of Jasmine and her point of view on all this, rather than just having her referred to.

There are some funny lines in the text, such as when Alice, who runs a bookstore, bemoans the decline of literature in the modern age—where F. Scott Fitzgerald is forgotten and “Fifty Shades of Grey” reigns supreme. Yet just as works of “classic literature” may be harder to sit down and read than the latest “hot and sexy” thriller of the moment, making a relationship work is much harder after marriage than in the first heady months of courtship.

In an interesting bit of irony, Alice notes she ordered 1,000 copies of the latest “Fifty Shades” sequel because they “fly off the shelves” and help keep her business alive. In the same vein, Billy has entered into the affair with Jasmine as (he says) a way of keeping himself feeling alive.

Mullavey is stalwart as the loyal husband who hates just about anything that upsets his status quo. He’s worked hard to achieve over the years.

Merrick is good as a man suffering a midlife crises and desperately looking for an escape to a time when responsibility was a buzzword instead of reality.

Wetherhead is fine as Jane, a bit of a shrew when first seen, as she tries to be the perfect mother. One of her best moments comes when she breaks down and tells Alice how no one explains beforehand just how hard it is to take care of a child.

Thomas is excellent as Alice (who has the best comedic lines), a woman who just wants what’s best for her family. She learns that inserting oneself into a difficult situation may have lasting consequences.

The final irony is the play’s title, with no lie that is told—be it about cheesecake or infidelities—is never totally clever. It is never little at all.

Though most people will find at least some of what’s presented relatable—who hasn’t wanted to escape from their life at some point—the characters and premise aren’t fully formed enough to really hit home. “Clever Little Lies” has funny elements, but will probably be quickly forgotten once you’ve left the theater.