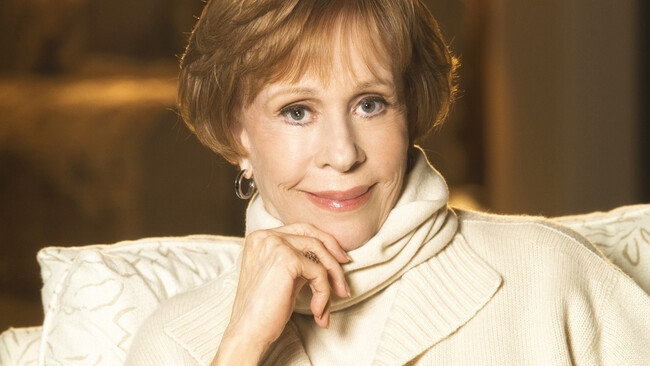 Carol Burnett is appearing in a one-woman show: "Carol Burnett: An Evening of Laughter and Reflection." (Courtesy of Carol Burnett)
Performing Arts

Theater Review: ‘Carol Burnett: An Evening of Laughter and Reflection’

CHICAGO—Time and age have not diminished Carol Burnett’s popularity.  When the beloved comedian stepped onto the Chicago Theatre stage, the audience went wild with applause.

The one-woman show offered the same question-and-answer format that Burnett used to open her 11-year television variety show.  In person, she is as warm and engaging as she was on the TV screen and, even though the Chicago Theatre was filled to its 3,600-seat capacity, it felt as though one was visiting a best friend in the intimacy of a living room.

One difference, though, was that a wide screen hung on the back wall to accompany Burnett’s recollections with photos and videos from her long-running TV series.  The screen served to show a montage of the special guests that graced her series over the years, which included Julie Andrews, Bob Hope, Andy Griffith, Lily Tomlin, Roddy McDowall, Jonathan Winters, Maggie Smith, Jim Nabors, among many more.

Burnett talked about Harvey Korman, Tim Conway, Lyle Waggoner, and Vicki Lawrence, all of  whom she credited with making her show a hit. She spoke about how she received a fan letter from Vicki who wrote about how her friends told her that she looked so much like Carol Burnett. Burnett had been looking for someone to play her sister in a comedy series, so she went to visit Vicki in person.

The most hysterical moments of Burnett’s show were her video clips of spoofs of Hollywood movies. Who can forget her iconic take on “Gone with the Wind” in which she played Scarlett O’Hara opposite Harvey Korman as Rhett Butler. The scene in which she comes out wearing a dark-green outfit complete with a curtain rod straight across her shoulders is still a riot.

Another video clip that had the audience in stitches was the famous sketch in which Harvey Korman is in a dentist chair and Tim Conway is a fumbling dentist who is so clumsy with the Novocain needle that he keeps numbing himself—until Korman can no longer contain his laughter. Burnett said that Conway’s mission in life was to destroy Harvey with laughter.

During the course of the 90-minute show, Burnett is so charming and energetic that it’s hard to believe she just turned 89.  Although she focuses on the past in “An Evening of Laughter and Reflection,” she ends on a future note in which she mentions the possibility of an upcoming TV comedy program.

I and others in the audience had a wonderful visit with the comic legend and were grateful to have had that time together.