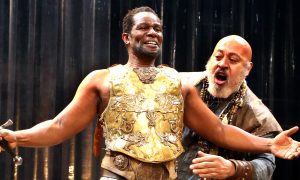 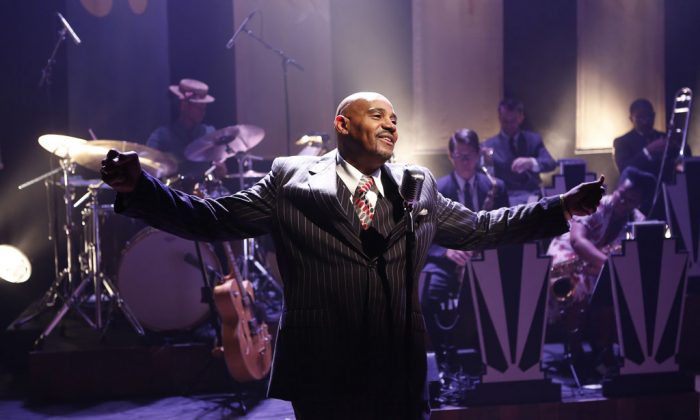 NEW YORK—Written by Alex Webb and based on Barney Josephson’s story, the eight outstanding jazz musicians and four principal singers bring memories of a time gone by to life. Unfortunately, this excellent production only runs through Jan, 4, so hurry to get your tickets.

“Cafe Society Swing” is two hours of moving tribute to Barney Josephson’s “The Wrong Place for the Right People” club, which broke racial barriers and introduced to the world many varied artists from Billie Holiday to Zero Mostel.

Cafe Society reigned supreme in New York for 10 years, from 1938 to 1948, until it fell victim to the Red Scare led by the House Un-American Activities Committee—the major undoing of many artistic careers.

Cyrille Aimee, one of the principal singers, comes into her own as a major musical star in the second act when her personality blossoms. Her native French in “Parlez-Moi D’Amour,” and her exciting version of “Hurry on Down” are a real treat.

The throaty vocals of Charenee Wade, the other principal female singer, is excellent, especially her version of the Billie Holiday classic “Strange Fruit,” which closes the show.

Allan Harris, who doubles on guitar and vocals, adds his own special quality, especially to the jazz classic “One Meatball.” For this song Mr. Harris substituted for trumpeter Benny Benack III at this show, though he shows his chops on several other tunes, as well as plays a mean guitar.

Evan Pappas, acclaimed musical theater actor, lends his voice as he performs the roles of journalist, bartender, and finally, Josephson himself.

The multitalented and multitasking musical director Alex Webb wrote the arrangements for the show in addition to playing piano and conducting.
The show is directed by Simon Green.

Nanci Callahan is the founder and managing director of the West Side Cultural Center.