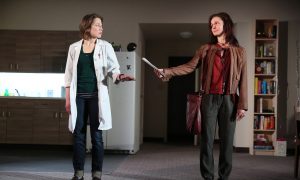 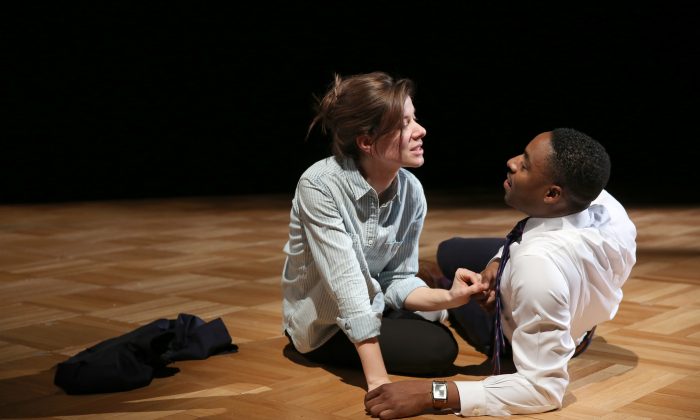 Jackson (Grantham Coleman), a black man in his mid-20s, came from a tough New York neighborhood. Determined to get out, he earned a scholarship and became a high-priced lawyer.

Now, with the old neighborhood beginning to gentrify, Jackson wants to move back and buys one of the newer apartments before property values go through the roof. It’s an idea his schoolteacher girlfriend Suzy (Tessa Ferrer), who happens to be white, is not thrilled about, though she agrees when Jackson asks her to move in with him.

No sooner has Suzy made her decision than Jackson announces that Don (Michael Stahl-David), his longtime friend and a perennial drug addict, will be staying with them. Don has just completed his seventh stint in rehab. Suzy, who has had her own brushes with Don over the years, is not pleased.

Making matters worse is Don’s insistence on total honesty between the three and his need for constant “family” meetings to clear the air of any problems.

If that weren’t enough, Suzy is being verbally harassed by a group of young men from the area. In response, she finds herself turning not to the workaholic Jackson, who she doesn’t want to burden with her increasing problem of not fitting in, but to Don, who begins to notice these altercations from their apartment window overlooking the street below.

As time passes, Suzy and Don find themselves growing closer while Jackson begins to find himself on the outside of things.

The feeling of losing control is the central theme of “Buzzer.” Its theme manifests in the feeling of being an outsider in one’s own home, as well as the idea of losing one’s sense of security.

While Jackson may feel he now owns a piece of the neighborhood he once left behind, Suzy feels completely lost and alienated. At the same time, the locals who continually bother her are themselves feeling tossed aside by the coming gentrification.

Its theme manifests in the feeling of being an outsider in one’s own home.
The interesting thing here is that both sides may have initially reacted wrongly; but as the play shows, it’s very hard for one side to trust the other when imagined slights get blown out of proportion.

Also tossed into the mix is the question of race. Suzy may not be a completely innocent party, as seen by her attitude toward other tenants in the apartment building. But one of the reasons she is being harassed is because of her relationship with Jackson. Yet when the two are out in the neighborhood together, they’re not bothered at all. Jackson acts as a sort of protective shield, claiming “they’re afraid of me.”

Stahl-David does a great job as Don, formerly a spoiled rich kid and someone who seems destined to fall off the wagon continuously. He and Jackson first met when Don came into the neighborhood to score.

Theater Review: ‘I’m Looking for Helen Twelvetrees’
Stahl-David is able to go beyond the expectations one has of the character and makes Don someone who genuinely cares about the people who took him in. Don desperately doesn’t want to screw up his life again.

A speech Don gives to Suzy’s class on the evils of drugs aptly encapsulates the attitude of the character. It also shows the difference money can make when you find yourself in trouble.

Anne Kauffman’s direction is excellent, slowly building the tension during the course of the play.
Coleman is fine as Jackson, an outwardly genial fellow who has a bit of an authority complex—he buys the apartment before telling Suzy and also tells Don he can move in with them before checking with her.

Wanting to show everyone how far he’s come, Jackson is just a bit too sure of himself for his own good and is quite ready to let his emotions take over if the situation warrants. There’s also a telling comment he makes regarding the police and gentrification, which shows Jackson’s current worldview.

Ferrer is very good as Suzy, someone who just wants a quiet life with the man she loves but who finds herself a fish out of water. She becomes more and more terrified as pressures from both outside and inside the home threaten to overtake her.

Theater Review: ‘Placebo’
Unlike Jackson, who is prone to seeking a confrontation as a way of resolving matters, Suzy has an ever-increasing feeling of impotence about her situation and just wants it all to go away.

Anne Kauffman’s direction is excellent, slowly building the tension during the course of the play until it’s akin to walking on a razor’s edge.

Laura Jellinek’s set is wonderfully spacious, showing the entrance to the apartment building, which figures more than once in the story.

Offering an important lesson about the dangers of taking things for granted, “Buzzer” powerfully shows what happens when one’s home isn’t the secure castle it’s supposed to be.

Also in the cast is Brett J. Diggs.