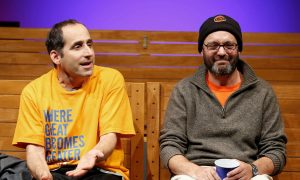 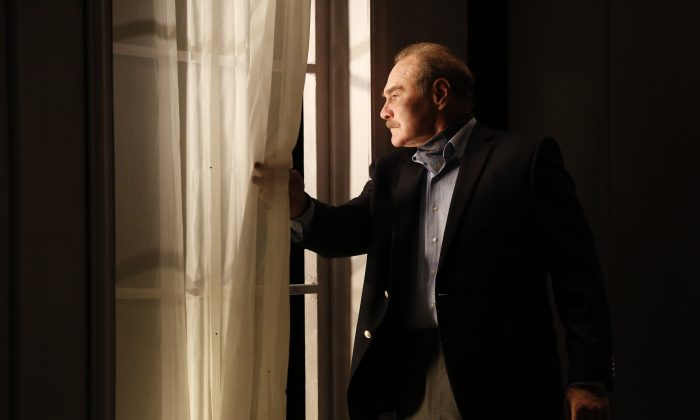 A question of principle
By Judd Hollander
biggersmaller
Print

1953 New Jersey—German painter Rudolf Bauer (Sherman Howard), a major figure in the abstractionist movement in the years before World War II, hasn’t picked up a brush in 13 years. Now his long unused studio is about to be the site of a meeting with Hilla von Rebay (Stacy Ross), Bauer’s former patron and one-time lover.

Rebay was someone Bauer trusted implicitly, but this trust was shattered by what Bauer sees as abject betrayal and what Rebay sees as unrealistic ungratefulness.

Also present at this meeting is Bauer’s wife, Louise (Susi Damilano), who has long felt Rebay’s presence in her husband’s life and who hopes to use this confrontation as a way to finally free her husband from the past.

It should be pointed out that the aforementioned meeting never took place. It is completely a product of the playwright’s imagination as she tries to delve into the mystery of why Bauer stopped creating the art he loved.

The prevailing understanding is that Bauer ended his career in a fit of rage over a contract he signed with the Solomon Guggenheim Foundation, which gave them complete ownership of all his future works.

Gunderson works hard to evenhandedly present the issue and to make it accessible to those who have no knowledge of the players or circumstances depicted. At times, things are perhaps too evenhanded, with Bauer and Rebay angrily sparring over past incidents and hurling vitriol at each other so often that it becomes verbal jousting. It takes on a sort of routine and patter-like feel before long.

Along with the need to move on, another point the play keeps coming back to is the danger of trusting the wrong people. This point is brought home when Rebay reveals that although the Guggenheim Museum was originally envisioned as a showplace for Bauer’s work, it would open with none of his paintings on display. The paintings were instead banished to the basement and Rebay herself forced off the Guggenheim Foundation board.

However, the actual reasons for these decisions are not examined as much as they should have been, and it would have been nice to hear from the Guggenheim side of the matter in order to bring the issue more into focus.

This missing piece of the story is only one example of the audience being given information in dribs and drabs rather than getting a chance to really delve into the facts.

Another instance of putting something out there and not really following through is the suspicion of Bauer’s pro-Nazi leanings. It is never explained why these suspicions arose.

The great treat here is watching Howard and Ross in action as they give life to these two passionate individuals, each of whom would gladly eviscerate the other. Yet both desperately need reconciliation, though neither will admit it. It eventually becomes apparent that the three characters are unable to free themselves, at least on an individual basis, from a past they have all become prisoners of.

Sherman makes a perfect Bauer. The painter is a man with a volatile artistic temperament, one he has kept submerged for too long. He finally reveals his anger at what he feels has been denied him, and we see the price he has paid for such betrayal.

Ross is good as Rebay, a born survivor not above using her wits, body, or whomever she can to get what she wants. Yet at the same time, she has a deeply protective attitude toward those she cares for and those she respects.

Damilano is excellent as Louise, Bauer’s former-maid-turned wife. On stage far less than the others, she is actually the catalyst for most of the action shown and the lynchpin that holds the play together. Damilano effectively shows Louise to be a sort of chameleon who has had to adapt to her husband’s changing moods, even while helping restore equilibrium for him.

Although a bit more of a denouement would have worked better, one could probably have cut at least 10 minutes of the play without sacrificing any essential material. Direction, however, by Bill English is good, keeping the tension visible from the first moment to the last.

English’s set design of the Bauer studio works well, as does the sound design by Theodore J.H. Hulsker and projection work by Micah J. Stieglitz, both of which specifically figure into the play’s final moments.

An interesting story with more questions than answers, Bauer works thanks to three very strong performances and its overall subject matter—despite some shortcomings in the delivery of the latter.