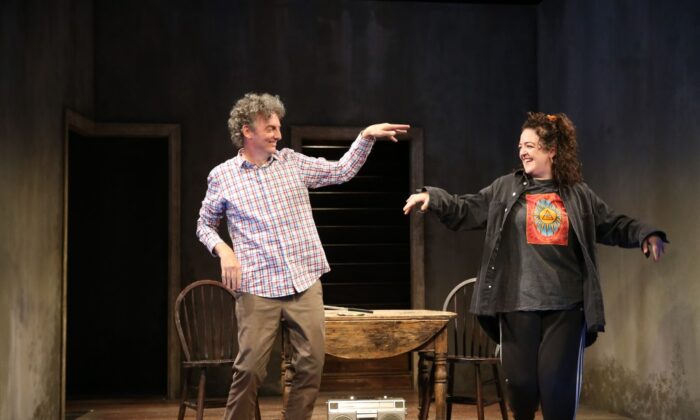 NEW YORK—In a very modest dwelling in Cork City, Ireland, two 30-somethng siblings wrestle with a long-standing problem: The problem lumbers noisily about upstairs. It is their old codger of a dad, getting more and more difficult by the day to care for.

This is the gist of Kevin Barry’s “Autumn Royal,” the Irish Repertory Theatre’s first audience-present offering since the pandemic began.

Timmy (John Keating) and his sister May (Maeve Higgins) are just about worn out after years of this stress. Should they continue to put their own lives on hold, or should they take some sort of action?

May doesn’t seem very ambitious, but Timmy has been yearning for years to move to Australia, where he will surf to his heart’s content, marry some cute blonde, and work for some unnamed business. May points out that Timmy’s past try at surfing ended disastrously.

The pair soon tires of making disparaging comments on neighbors passing by, a major activity, it seems. It’s time to act!

Inventive director Ciaran O’Reilly lightens the proceedings by having Keating do a sort of dance at one point. But they are marking time.

Even as the siblings get out a ragged telephone book to bring their idea into reality, they reminisce about their dad as he was in days past. Very handsome, always neatly dressed, May muses. And what a hard worker, Timmy comments; never one to lie down on the job.

Their mother also was terrific. It’s just that one day, she went out on an errand and never returned.

Even as we, the audience, hear the specifics of this family, many of us feel a pang of anxiety. Don’t we face the same issue? What to do with our aging parents?

As Timmy turns the phone book pages, he lights upon one nursing home that seems more attractive than the others: It is Autumn Royal. Their dad is packed off there somehow, but from here on the play becomes murky.

It seems that Dad has escaped. He is later seen (or is he?) leading a parade in town. Even their mother is seen, or is she?

It’s become nebulous. But maybe that’s the playwright’s point: How will Timmy and May really solve the problem in a way that doesn’t hurt someone?

How will, perhaps, some of us?