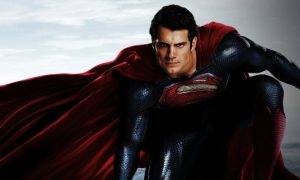 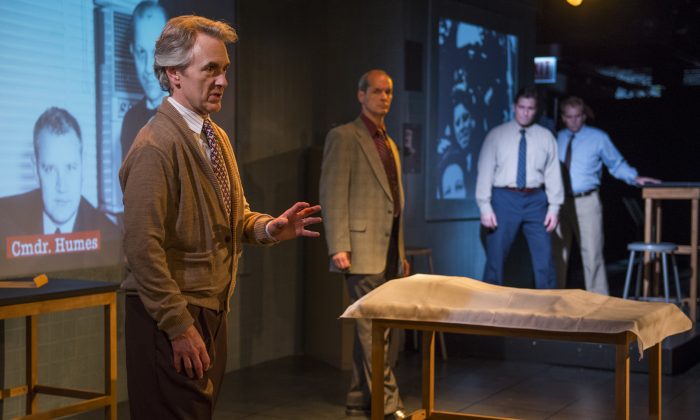 CHICAGO—The problem with not looking at the cold hard facts when a crime is committed is that you’re allowing the criminals to come back and bite you in the butt—at least that’s the case when the mob is involved. This point comes across in the investigative theater piece, “Assassination Theater,” which presents another theory as to who assassinated President Kennedy, as well as how and why.

Yes—another conspiracy theory. Our current tolerance for these theories is just about at a level where listeners inwardly groan and out of politeness refrain from rolling their eyes. But Hillel Levin’s investigative theater—based on his compilation of research and presented as fact—presents a compelling story.

Levin’s piece showcases the rather embarrassing story of the U.S. government’s reaction to President John F. Kennedy’s assassination in 1963. Basically, the government officials were suckers played by the mob.

Investigative reporter/writer Levin (Michael Joseph Mitchell) spent seven years researching the assassination of JFK after getting a tip from former FBI agent Zechariah Shelton (Mark Ulrich), who had already done a bit of his own research.

The mob conspired to kill Kennedy, and the government, out of fear, conspired to control information released to the public.

In fact, Shelton had met the man who claims he traveled to Dallas and fired the lethal shot from what has come to be called the Grassy Knoll. This man, James Files, is alive and in an Illinois prison.

Starting with this astonishing confession, especially since it’s offered with a matter-of-fact delivery, we are led through exhaustive and exhausting facts that ultimately offer a solution to the puzzle: The mob conspired to kill Kennedy, and the government, out of fear, conspired to control information released to the public.

All the major players who perpetrated or covered up the crime were ably played (and sometimes a bit overplayed) by only two actors: Ryan Kitley (Hoover, LBJ, RFK, Ruby …) and Martin Yurek (Bugliosi, Files, Specter, Warren …).

We discover that the shooter, Files, had ties to the crime syndicate Chicago Outfit, and his association included a much bigger fish, mobster Chuck Nicoletti. Nicoletti in turn knew Johnny Roselli and boss Sam Giancana, and Giancana was one step away from the biggest Outfit leader of all, Big Tuna Tony Accardo.

Levin notes that Giancana was killed shortly before he was to appear before the U.S. Senate Church Committee, which reopened the investigation of Kennedy’s death in the ’70s. Roselli and Nicoletti met similar fates, while Big Tuna, the numero uno boss, died of natural causes at the ripe old age of 86.

Why did the mob want Kennedy dead? The new attorney general, Robert F. Kennedy, had made deep inroads against organized crime and was getting in the way of the mob dipping into the teamsters’ pension, which was bankrolling some Vegas operations. Clearly he had to go.

But if they took out JFK’s brother, Robert, the president would strike back with tremendous force. Much smarter to take down the big guy himself.

How did they pull off the biggest crime of the last century? That’s what the two hours of projected photos, documents, maps, and brilliant connecting of the dots explains.

Nearly genius was the mob’s working on the psychology of the U.S. government. Choosing Lee Harvey Oswald, already a known communist sympathizer, the mob pointed him toward additional communist connections and even fabricated some, all in an effort to groom him as the ultimate fall guy.

Why? Because the mob knew that the American government would go to inordinate lengths to shut the case as quickly as possible. Essentially, the administration’s aim was nearly benevolent, at least insofar as Levin can make out. They wanted to restore confidence in the government while, at the same time, clamping down on the idea that the Soviets had anything to do with it.

Accusing the Soviets of this kind of crime could easily escalate into nuclear war. There’s a telling scene in which Lyndon B. Johnson practically twists the arm of Justice Earl Warren, known as a man of remarkable integrity, so that he would head up the Warren Commission.

Levin even notes precedence for this elaborately schemed murder. Further back in Chicago’s notorious history, Mayor Anton Cermak was shot in 1933 in what has been long deemed an attempted assassination of President Franklin D. Roosevelt. But Levin says the mob actually paid another outsider, akin in many ways to Oswald: an alienated loner by the name of Giuseppe Zangara, who, barely able to work, had been living on the edges and somehow suddenly came into money.

As for the crime coming back and biting them in the butt, Levin makes the case that the Bobby Kennedy murder was set up in exactly the same way, with another loner, Sirhan Sirhan, taking the rap.

I applaud Levin’s ability to script this piece (what a nightmare of information he has arranged to be mostly understandable), as well as director Kevin Christopher Fox’s ability to stage it. At times the need to keep the action moving wins out over our ability to take in the mountains of information, but Fox knows that if a pace slows too much and boredom ensues, the facts won’t matter.

Is this the truth of the assassination?

Was I convinced by Levin’s argument? Absolutely. We’ve become all too familiar with the lone killer walking into theaters, schools, and churches to steal lives. So I find it almost nostalgic to reconsider this event as one in which the good guys (U.S. government), however regrettable in hindsight, acted out of patriotic duty to calm and protect American citizens. And if there’s anything gangsters know how to do, it’s to work the system.

Getting at the Truth

Is this the truth of the assassination, then?

Levin posits that theater is an appropriate vehicle for his theory because “the assassination was a kind of theater, staged to put blame on only one actor in what was, in fact, a much larger production.” He further distances us from considering the presentation as fiction by housing the production in the Museum of Broadcast Communications.

Metaphorically, “Assassination Theater” may be associated with theater, but theater actually plays a different role in human consciousness. Theater can make us feel like a convincing story is fact. When our eyes see people taking action, that visual experience deepens our knowledge. We may even become convinced that theory is fact.

Supervillain to the Rescue?

Thus, the answer to the question of whether this is a truthful depiction of JFK’s assassination is another question: How can the audience be expected to know? We are not well versed in the facts enough to assess the data.

If Levin wants the public to acknowledge his theory as fact, then we need to hear it outlined in a courtroom, in a congressional hearing, in any setting where opposing arguments from theorists as knowledgeable as he can be presented. It’s the only way we would have a chance to see the holes, if any, in his arguments.

It’s a surer way for the general public to sort fact from fiction.

Ever since 1988 when the Steppenwolf Theatre world premiere of “The Grapes of Wrath” won the Tony Award for Best Play, Chicago productions have enriched and invigorated New York theater. Presented here is the very best Chicago currently has to offer.