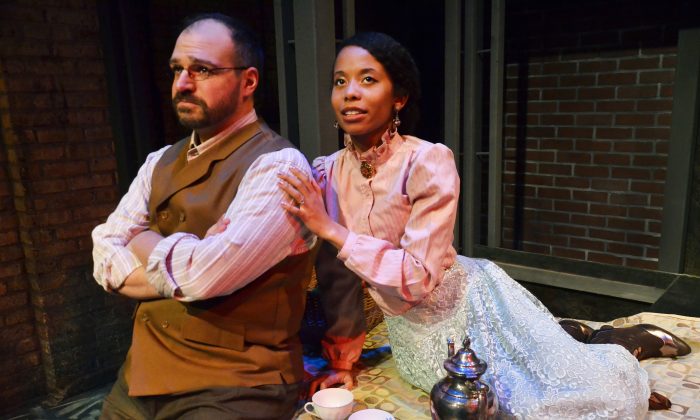 CHICAGO—Missing are the glittering ballrooms, lavish costumes, and the panoramic views of huge estates that create the 19th-century Russia we are used to seeing on film. Instead, Jessica Wright Buha’s world-premiere adaptation of Leo Tolstoy’s “Anna Karenina” focuses on the characters and their thirst for happiness. And whatever the adaptation lacks in poetry and scope, director Amanda Link more than compensates for with visual touches and brilliant, resonating stage work.

Tolstoy’s solution for happiness is revealed in two main plots. The first involves Levin (Dan Granata), a philosophic landowner in love with Kitty (Brandi Lee), who at the start of the story has eyes for the dashing Count Vronsky (Eric Gerard).

The other revolves around Anna Karenina (Ilse Zacharias), who has a gift for loving but is trapped in a passionless marriage to the older Karenin (Michael Reyes). He’s more interested in efficiency and societal opinion than in his wife.

Anna travels to Moscow to patch up the marriage of her brother, the affable but womanizing Stiva (Dan Cobbler), to Dolly (Aneisa Hicks). Anna manages to convince Dolly to forgive her brother’s transgressions, but it’s on the way to Moscow to meet her that two events irrevocably change Anna’s life: She witnesses a fatal train accident, and she meets Vronsky at the train station, where both fall instantly in love.

We watch three love relationships as the play progresses. Dolly and Stiva limp along in theirs. Dolly may have stayed in her marriage, but she’s settled for her husband’s gratitude rather than real love. She loves her children and finds fulfillment there, but she herself is not loved and therefore is not entirely happy.

When Anna loves, she loves completely. “I love you so much,” she says countless times to her 6-year-old son, Seryohza (played by a puppet, with voice and handling by Michelle Stine), and that’s not an exaggeration. It’s her love for her son that compensates for her loveless marriage.

And now she loves Vronsky. We watch a passionate affair develop between Anna and Vronsky, which, while it does free Kitty to reconsider Levin’s proposal, it also sets Anna on the wrong track that leads to her eventual doom.

Anna cannot keep both her son and her lover, yet she tries to hold on to both, ultimately tearing her apart. She refuses to ask for a divorce, because that will forever separate her from her child. And over time, societal condemnation of her illicit affair confines and isolates her, leading her to doubt Vronsky’s love. As Anna believes she’s no longer loved, she falls into despair.

And last, we watch the promising development of a relationship between Kitty and Levin, and their eventual marriage. She sees in the good-hearted Levin a chance for mutual love. But suffering is present even in a good life. Running horrified from his wife’s birthing bed, Levin questions whether human existence is worth the tremendous suffering we endure.  “I have everything I wanted, why am I miserable?” Levin cries in anguish.

Through Kitty’s wisdom, Levin comes to accept that happiness lies not in being loved—the lack of which saddens Dolly and torments and defeats Anna—but in actively loving others.

It’s commendable that Buha gives a light touch to jealousy (which might crush Tolstoy’s overall message in so short a presentation) and to societal pressures on women at the time (the emphasis of which would have been an all-too-easy tack).

It’s also understandable that she pares down Levin’s philosophical transformation. Yet it would have broadened the story if she could have hinted that the landowner’s appreciation for the peasants on his estate deepens his understanding and acceptance of God. The point of loving others, though made through Kitty alone in the play, would, if it were tied to faith, have had deeper ramifications and would have been truer to Tolstoy’s aim.

Director Link takes command of the production by moving actors from one stage niche to another in order to create a new locale; a hallmark of Lifeline productions is the company’s ingenious use of tight space.

Link’s imaginative use of actors to create mechanical sounds and movements physicalizes Tolstoy’s fear that the industrial age was pushing us away from a life of faith and simplicity, just as the story’s protagonist is pushed along an inexorable path once she makes the fateful decision to commence her affair.

The use of a puppet and handlers to play little Seryohza creates a lovely, pure innocence that underscores our desire for the simple and the good.

Michele Stine shines as the voice behind puppet Seryohza, ranging from playful, boastful, affectionate, to forlorn and irritable.

Reyes works well as Karenin, a man seemingly closed to love, who is moved to forgive Anna but then loses his chance to redeem himself above pettiness. Hicks is a sincere Dolly, and Lee a quiet and dignified Kitty.

Granata is marvelous as the character who learns the most: Levin puts aside existential doubts to embrace a path of active love.

Gerard is a forceful Vronsky, able to convey the character’s highs and lows, but he misses subtleties in between, and, therefore, he’s not quite a match for the vivacious Zacharias in her depiction of a soulful march along a desperate journey.

If you’ve never read “Anna Karenina,” Link and Buha’s satisfying adaptation at Lifeline Theatre might just sharpen your appetite for the original. Certainly, no tiny company other than Lifeline could take a long novel of tragic and transcendent proportions and boil off all but its essential message: Our happiness lies in loving others.