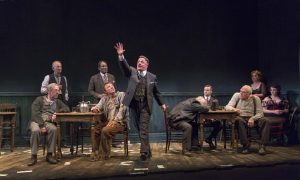 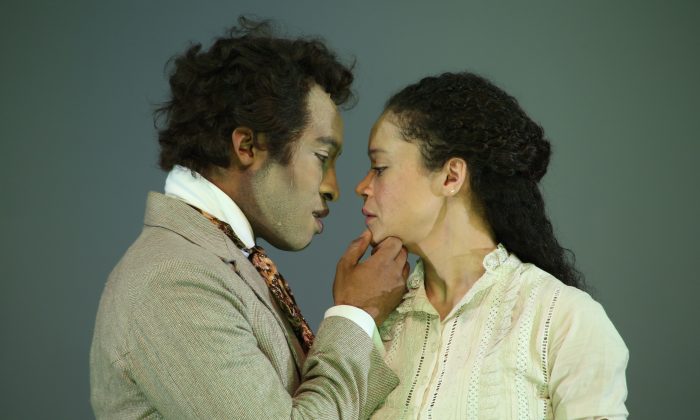 George (Austin Smith in white face), nephew to a deceased plantation owner, falls for Zoe (Amber Gray), a beautiful ex-slave, in a reworking of "An Octoroon." (Gerry Goodstein)
Arts & Culture

NEW YORK—Playwright Branden Jacobs-Jenkins presents a new look at racism with his update of Dion Boucicault’s 1859 melodrama “An Octoroon.” This version first presented at Soho Rep. in 2014, is now at Theatre for a New Audience at Polonsky Shakespeare Center.

After a lengthy introduction, in which BJJ (Austin Smith—as a stand-in for Jenkins) recalls conversations with his therapist and the expectations that come from being a black playwright, he then channels the spirit of Boucicault—called here the Playwright (Haynes Thigpen). Then the action switches to the plantation Terrebonne in Louisiana where, in a sea of cotton, house slaves Minnie (Maechi Aharanwa) and Dido (Pascale Armand) are catching up on plantation gossip.

All is not well at Terrebonne. The master of the house has died leaving numerous debts, which his nephew George (Smith), recently arrived from France is trying to sort out. Among them are gambling losses to the scheming Jacob M’Closky (Smith).

M’Closky owns half of Terrebonne as a result and plans to buy the rest when the plantation is sold at auction. George meanwhile finds himself drawn to the beautiful Zoe (Amber Gray). Zoe knows the two can have no future together since she is an octoroon—a person one-eighth black. She’s also the daughter of a slave, and a former slave herself, having been given her freedom by George’s late uncle, as she is his illegitimate child.

Though George is quite willing to ignore Zoe’s situation, he can’t ignore that the only way of stopping the sale of Terrebonne, and all the slaves on it, is by marrying Dora (Mary Wiseman), a wealthy white woman from a neighboring plantation.

There is also talk of possibly receiving long-awaited funds from England, but when that hope is stymied by murder, all seems lost.

The dialogue used making the audience laugh at the absurdity of it all takes away none of the grimness of the time portrayed. This situation is magnified by sympathetic whites who genuinely feel for the slaves, though they have no intention of freeing them. Plus their banding about terms like “darkie” and “nigger” only goes to show the hypocrisy of even the most well-meaning characters.

It’s ironic that those born to freedom and those born to slavery seem to share a contentment in their respective situations. Only Zoe, upon learning her own freedom may be taken away, can appreciate the horror of losing something she has so long taken as a right.

Issues of theme aside, the story itself is quite involving as one begins to care about the ultimate outcome of the characters. Will the plantation be saved; will George and Zoe live happily ever after; will the murderer get away; and will Minnie and Dido wind up as slaves on a riverboat?

As these different elements play out, the audience is treated to several unexpected situations designed to draw them into the story while never letting them forget Jacobs-Jenkins’s decision to present “An Octoroon” in a new light. It effectively shocks the audience into complete silence.

The only thing that really doesn’t work are sections of dialogue between BJJ and the Playwright when they talk about race, social issues, and theater conditions. Much of this, especially the prologue, goes on for way too long.

It’s ironic that those born to freedom and those born to slavery seem to share a contentment in their respective situations.
The bantering between the two also continues later on when BJJ takes Boucicault to task for a plot hole in the story. These moments may be another attempt by the playwright to lull everyone into a false sense of security before yanking the rug out from under us, but it feels unnecessary, given the power of the play itself.

Smith comes off well as both the well-mannered but ultimately naive George and the evil M’Closky; effortlessly switching from one to the other in a hilarious confrontation scene.

Thigpen does very well as the Boucicault stand-in, playing the part as a perennially drunken Irishman. The actor also does a good turn as the Indian Whanotee—another character resembling a walking stereotype.

Theater Review: ‘Constellations’ Brings Out Stars Jake Gyllenhaal and Ruth Wilson
Ian Lassiter is good as the aging slave Pete, continually putting on a show for the white folks while trying to hide his fear of being forced to leave Terrebonne.

Gray is excellent as Zoe, the only truly three-dimensional character in the piece. Quite effectively she shows the pain of being free in name only, while not being allowed to follow her heart; she also shows terror at realizing she may once again become someone’s property.

Sarah Benson’s direction is very good, helping to tie together the play’s different genres into a mostly seamless whole. Also quite important is the work by on-stage cellist Lester St. Louis and projections by designer Jeff Sugg.

“An Octoroon” does an excellent job in putting a fresh spin on an old tale while never letting the audience forget why this production was mounted in the first place.

Also in the cast is Danielle Davenport.