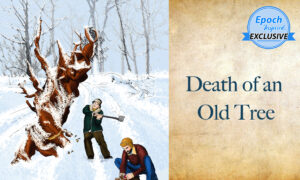 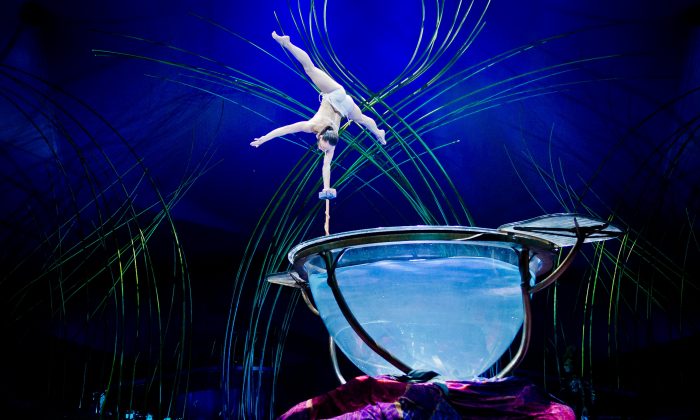 Ikhertsetseg Bayarsaikhan balancing her body on a metal pole perpendicular to the stage while suspended over a tank of water.
Arts & Culture

A fantastical experience
By Judd Hollander

NEW YORK—Using the plot from William Shakespeare’s “The Tempest” as a starting point and adding some spectacular athletic elements to the mix, Cirque du Soleil’s production of “Amaluna” is nothing short of breathtaking. Taking place under a specially constructed big top in Citi Field, in Queens, New York, the show is a treat from start to finish and fun for audience members of all ages.

The show takes place on the magical island of Amaluna. The island is ruled by Prospera (Julie McInnes), who presides over a tribe of Amazons in a land where giant peacocks roam about.

Cali (Viktor Kee), a half-man/half-lizard creature, is often causing mischief. Cali has long been in love with Prospera’s daughter, the beautiful Miranda (Ikhertsetseg Bayarsaikhan), though she thinks of him more as simple house pet than as anything romantic.

Life on the island drastically changes when a group of pirates are shipwrecked, among them the handsome Romeo (Evgeny Kurkin). He quickly falls in love with Miranda and she with him.

However Cali does not take kindly to losing his love to a rival and is determined to keep them apart by hook, crook, or magic.

At the same time, the rest of the pirate band soon find themselves prisoners for the women’s amusement—at least until all find a common ground. And then they soon launch flying into the air, in some cases quite literally.

The plot serves as a good device upon which to hang the various athletic feats performed by the company. These range from performers who use their feet to toss other members of the troupe into the air to Bayarsaikhan balancing her body on a metal pole perpendicular to the stage while suspended over a tank of water.

Kurkin as Romeo, in the depths of despair after losing Miranda to Cali, clambers up a metal pole in an attempt to follow them, only to fall to the stage, stopping only a hair’s breath away from disaster.

What’s really amazing when observing the various athletic feats is how fast and intricate some of the different movements are. This is especially true when trying to follow the hand movements of company members as they twirl giant bolos. Their hands go so fast it’s virtually impossible for the human eye to keep up.

Other segments of note include Kee doing a juggling routine and a woman twirling a batch of silver hoops. Some of the very good group numbers feature the women performing an elaborate routine on the uneven bars, often in perfect unison, and the men getting into the act while leaping higher and higher thanks to the use of a teeterboard.

Though for sheer wonderment you can’t beat the aerial feats performed by a trio of ladies (Virginie Canovas, Kylee Maupoux, Marina Tomanova) as they soar high above the audience and across the stage to the “oohs” and “aahs” of the crowd.

The show also contains a good amount of comedic humor and audience participation. These are both provided by the pirate captain (Nathalie Claude) who has a running love affair with someone from the audience. Not to mention the various performers moving up and down the aisles with Cali tossing popcorn down on the spectators from his various high perches above the arena-like playing field.

The entire atmosphere is helped greatly by the onstage female rock band that plays a very enjoyable score with pieces ranging from hard-driving numbers to quiet ballads.

The creative team’s work is flawless here, keeping both the plot and action moving smoothly, and various situations easily transition from one to the next.

Costumes by Mérédith Caron are especially gorgeous, particularly the ones worn by Canovas, Maupoux, and Tomanova.

Children will love the various effects; adults will appreciate the Shakespearean connection, and all will be transported by the atmosphere into a world where anything can happen and where wonders are commonplace.

“Amaluna” is a delicious treat for all concerned.

Other characters are played by Shereen Hickman and Andréanne Nadeau.