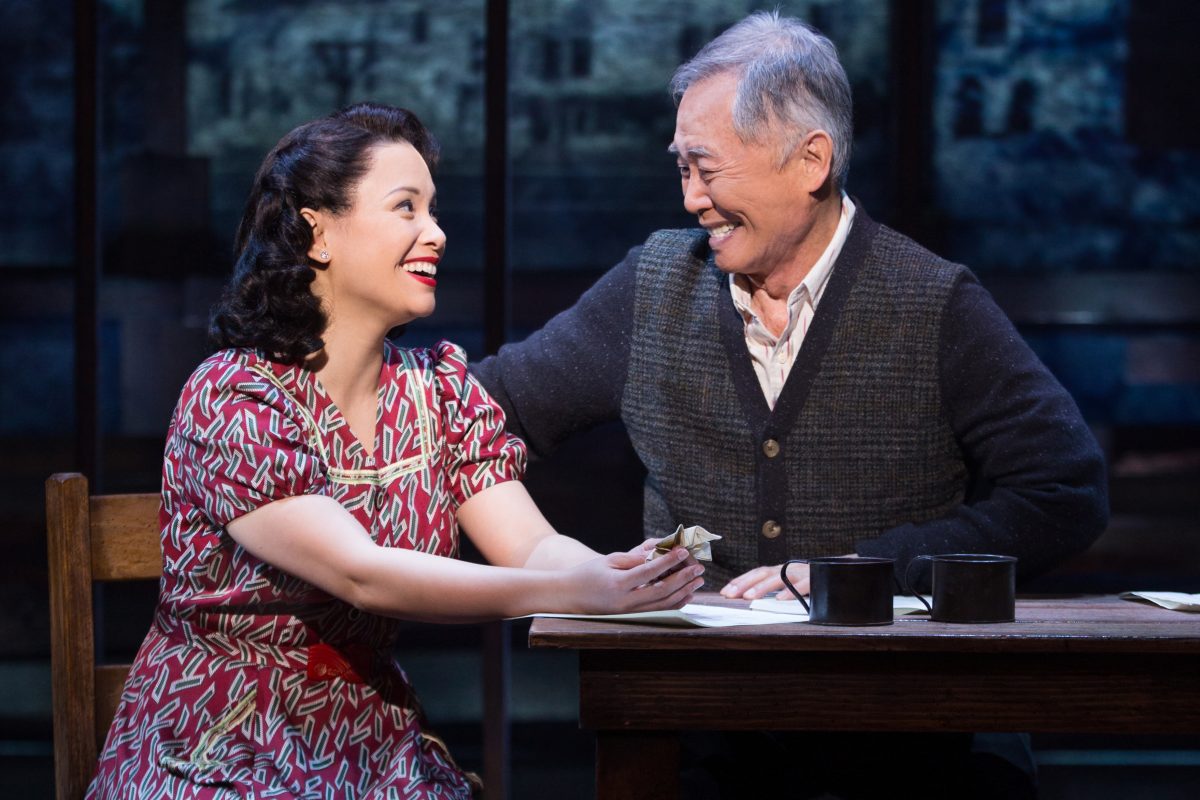 Lea Salonga and George Takei in "Allegiance," which exposes the plight of Japanese-Americans during their internment in World War II. (Matthew Murphy)
Arts & Culture

It's not a question of who is right
BY Judd Hollander TIMENovember 19, 2015 PRINT

NEW YORK—The new Broadway musical “Allegiance” shows that the importance of standing up for one’s beliefs must also be tempered with the need to understand and forgive those who don’t share your point of view. The show puts a human face on one of the most shameful incidents in recent American history: the forced internment of approximately 120,000 Japanese-Americans during World War II.

With a book by Marc Acito, Jay Kuo, and Lorenzo Thione and music and lyrics by Jay Kuo, “Allegiance” introduces us to the Kimuras, a typical family living the American dream. Part of a thriving Japanese-American community, they own a farm in Salinas, California.

The farm is run by Tatsuo (Christópheren Nomura) with help from his daughter, Kei (Lea Salonga), the defacto matriarch since her mother died years earlier giving birth to Sammy (Telly Leung).

‘Allegiance’ captures a period when America was facing one of its darkest hours from without.

Sammy is now a college student with an eye toward law school, a career path he does not want, but one his father insists he follow. Observing all is Tatsuo’s father, Ojii-chan (George Takei).

Everything changes with the bombing of Pearl Harbor and the United States’s entry into the war. Almost immediately, the Japanese in the United States find themselves marginalized with Sammy and his friends denied the right to enlist due to their being classified as “enemy aliens.”

With anti-Japanese hysteria on the rise, President Franklin Delano Roosevelt signs a declaration in early 1942 ordering the removal of U.S. citizens/residents of Japanese ancestry to so-called relocation centers. The Kimuras and many of their friends find themselves transported to a camp in Wyoming, where living conditions are primitive, medicine scarce, and dust storms and freezing temperatures frequent companions.

Eventually, through political maneuvering, Japanese-Americans are allowed to enlist in the Army, on the condition they first sign a loyalty oath to the United States. Sammy is eager to join the Army and thus prove himself to be a true and loyal American and through his example, help to free his family and friends.

Sammy’s decision, however, puts him directly in conflict with his father, who forbids him to enlist. Caught in the middle is Kei, who finds herself attracted to Frankie Suzuki (Michael K. Lee), one of the more vocal dissidents in the camp, who refuses to sign or serve until his fellow internees are freed.

Each of these men see the importance of standing up for his beliefs—whether his allegiance is to his own belief or those his country demands.

Hand in hand with this idea are the dangers of going to an extreme in these beliefs. This is the reason Tatsuo tries to discourage Sammy from trying to enlist right after Pearl Harbor. And, in a nice touch, when Sammy hangs an American flag outside their living quarters in the relocation center, Ojii-chan gets the last laugh by concealing wind chimes, considered contraband, inside the folds of the flag.

Later Sammy becomes the adapter-in-chief, trying to get his fellow camp members to sign a petition and present their list of grievances to the camp officials.

However others, such as Frankie and Tatsuo, refuse to simply go along with what is asked for. They stake out their own moral high ground by demanding the rights they see as already their own—as Americans—without being willing to go to extra lengths to prove it.

Ojii-chan, the term meaning “grandfather,” demonstrates the wisdom of someone able to adapt to his situation while finding tiny victories wherever he can. He does so not only with the aforementioned wind chimes, but also through the garden he grows at the camp.

Unfortunately, the musical ignores many historical facts surrounding the incidents depicted; their acknowledgment could have made “Allegiance” more complete. For example, very little anti-Japanese sentiment, other than the standard “Jap” comments, is heard in the days and weeks after the attacks.

Indeed, much of the early show seems rushed. The story doesn’t really find its footing until the internees arrive at the camp.

It also would have been nice to see more than one brief mention of the decades-long struggle for reparations for those interned. The United States finally issued those reparations, along with a formal apology, in 1988.

As far as the acting is concerned, Takei steals the show. His performance takes on an added poignancy when one realizes this is an intensely personal story for him as he and his family were among the 120,000 interned.

Each of these men see the importance of standing up for his beliefs.

Salonga, who has a brilliant singing voice, strikes a chord as a self-described old maid for whom family is everything. Yet she finds love where she never expected to.

Leung is good as the true believer Sammy. He sees his attempts to work with the system as a way to earn his people the rights and respect denied them.

Nomura is good as the father of Sammy and Kei, almost deliberately one-dimensional at the beginning, but ultimately showing himself to be just as principled as his son, which may be the reason the two disagree so much.

The score is rather enjoyable. Some of the more soul-stirring numbers are “Gaman” (“endurance with dignity”), “Wishes on the Wind,” and the very powerful “How Can You Go?” Also of note is the very satirical “442 Victory Swing,” “Resist,” and the cute “I Oughta Go” between Sammy and Hannah Campbell (Katie Rose Clarke), an Army nurse at the camp. The number offers the beginnings of a romance between the two.

A gripping tale, “Allegiance” captures a period when America was facing one of its darkest hours from without, while at the same time, all too many made it even darker for those within.