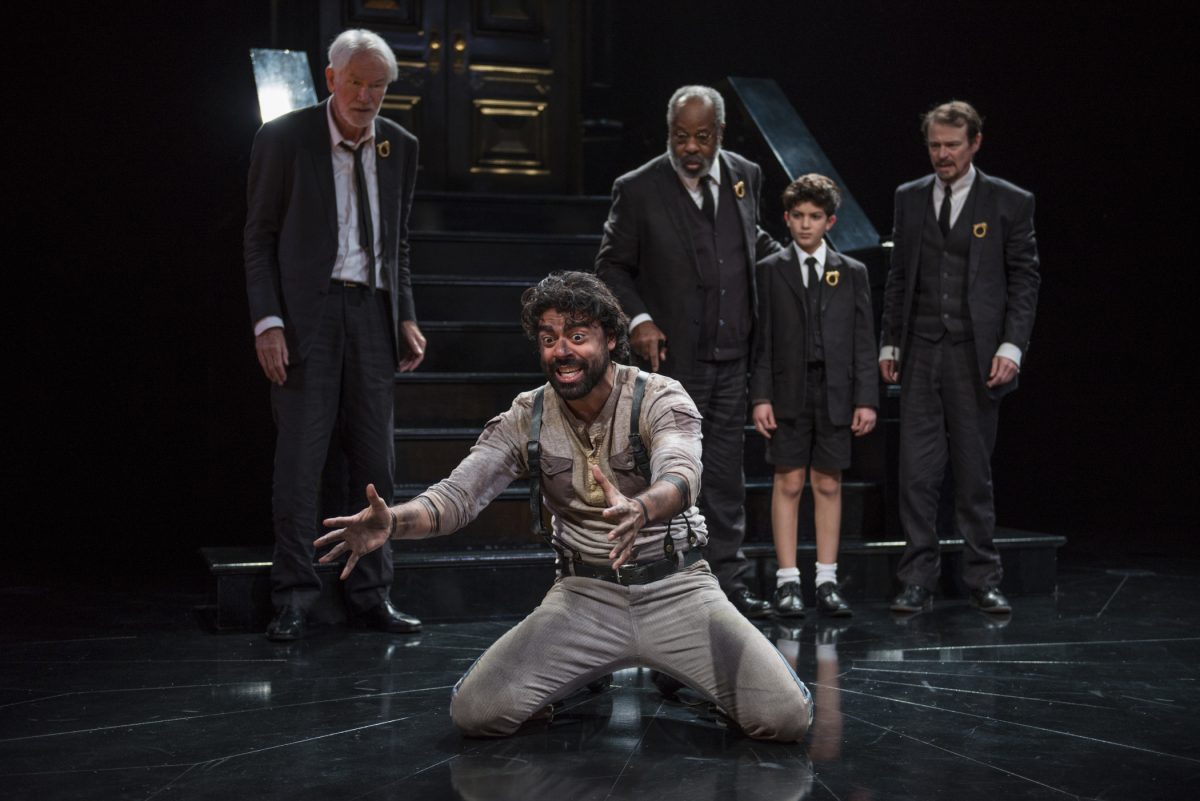 CHICAGO—Court Theatre’s Nicholas Rudall has retranslated and juxtaposed three Greek tragedies, related by myth rather than by author, to create an artificial trilogy. It’s a noble effort, for he aims to deepen our appreciation of these classics. Unfortunately, the resulting production of the second play in the cycle—Aeschylus’s “Agamemnon”—lacks the nobility of Rudall’s intention.

In trying for a contemporary reading, director Charles Newell takes the very little stage time of the play’s namesake and deflates our expectations for the returning hero. Agamemnon’s few speeches reveal that he is untrustworthy and ready to use his power against any who might thwart him.

Above the city, a weary watchman spies a distant light. It signals that Greece has won a 10-year war against the city of Troy. Queen Clytemnestra (Sandra Marquez) had organized a torch relay so that she would be forewarned of the outcome of the war as quickly as possible.

The chorus, here a small lot of old men (Alfred H. Wilson, Thomas J. Cox, Gary Wingert), doubt Clytemnestra’s announcement of Greece’s victory. After all, a woman can hardly be trusted. A woman’s betrayal started the war: Queen Helen ran off with her lover to Troy, deserting her husband, that is, her king and her country.

Moreover, the chorus knows that Clytemnestra has also betrayed her husband and king by taking a lover while he’s been away, although she brazenly denies it.

But a herald (Gabriel Ruiz), running ahead of the returning soldiers, confirms Clytemnestra’s news. The war is indeed won.

Ten years before, King Agamemnon sacrificed the couple’s daughter, Iphigenia, in order to appease the gods and hasten his fleet to battle. Devastated, Clytemnestra has not forgiven him. On the contrary, she has been waiting to set in motion a plan she’s been hatching for years: the murder of her husband.

The myth of Agamemnon is a hard one for modern audiences to bear.

And now the time is ripe. When Agamemnon (Mark L. Montgomery) finally returns with war trophy in tow—the princess and soothsayer Cassandra (Adrienne Walker)—Clytemnestra pretends to welcome him.

Then, due to Clytemnestra’s insistence, Agamemnon steps upon a runway of costly purple fabric, an act of hubris for a mortal, which seals his doom.

The myth of Agamemnon is a hard one for modern audiences to bear. Our hearts sicken at the thought of a father killing his child. To the Greeks, though, it may have been the ultimate test of allegiance in which a commander makes the sacrifice for the good of his country—like sending a son off to war.

For us, the action betrays innocence, pits the strong against the defenseless, and destroys our ideal of family. So we are already inclined to despise Agamemnon.

Yet our abhorrence conflicts with the play’s message. The play’s original intention, crucial to playwright Aeschylus’s “Oresteia” trilogy, was to demonstrate how an eye costs an eye and how blood begets blood. We should be so appalled by this chain of bloody crimes depicted in play after play that we agree with the Athenian cure: justice through law and reason.

Thus, the challenge of directing the play for an audience today—especially when seen without its companion pieces—is in offering something to counterbalance Agamemnon’s crime. He needs to be ennobled in some way. We must at least feel he is an honorable leader, willing to re-establish justice on his return home to rule. If not, we do not feel the need to let go of vengeance.

We should be so appalled by this chain of bloody crimes depicted in play after play that we agree with the Athenian cure: justice through law and reason.

Yet here, however theatrically appealing, Agamemnon emerges from what looks like Hades on the River Styx, not from a chariot bringing a triumphant warrior home. This image fits the figure we meet.

Montgomery’s Agamemnon, like hollow politicians today, chooses his words for effect—a point emphasized by his stepping up to a microphone. No honesty. Instead of reclaiming his right to rule with justice, he threatens his people. No honor. We are left with an aftertaste of a smarmy despot.

Why, we wonder, has the chorus so anticipated his return? Why do they love him? Why do they feel horror at his murder? We don’t.

Until this point, we see the chorus as genial worriers with some dignity and humanity, but after they are taken in by this sham ruler, we see them as somewhat foolish.

As Agamemnon’s portrayal should help pull us toward reason, Clytemnestra’s should push us away from revenge. We should shudder at the murderess, no matter how much we sympathize with her.

But here, elegant Marquez—queenly, restrained—handles the chorus and her husband with aplomb. In fact, she never fears her plot will fail; she seems like a woman who could not only plot to overthrow a ruler, but also handle the reins of governance herself. She is hardly the looming terror whose emotions force us to recoil in horror.

Akin to Marquez in restraint is Walker’s Cassandra, the prophetess. Able to see her own impending death, Cassandra could also evoke terror for us. Yet she seems a ghost already, resigned to her fate, or perhaps living out a dream of her last few minutes. So our fear is not stoked by the seer, either.

Only two characters compel: Gabriel Ruiz’s Herald brings the news of victory in an urgent rush, still reeling from a war that he hasn’t quite shaken off; and Aegisthus (Michael Pogue), the queen’s lover and nephew-in-law, is in control and speaks from the heart. Even after he acknowledges his part in the plot to murder the king, we are drawn to his conviction.

And when Aegisthus reveals that the whole House of Atreus, Agamemnon’s tribe as well as his own, is steeped in its own blood, when he reveals the hideous ancient crimes that range from adultery to murder to cannibalism against his side of the family, we somehow feel that justice has been served with this murder.

In short, when a cool Clytemnestra and straightforward Aegisthus replace a noble Agamemnon, we leave inclined to side with the murderers seeking justice through vengeance. Not with reason and law.

Is that why it is Clytemnestra’s photo that appears on the program cover rather than her husband’s?

With the bloody crimes we see in the world today, this is not where we want to be.

Ever since 1988 when the Steppenwolf Theatre world premiere of “The Grapes of Wrath” won the Tony Award for Best Play, Chicago productions have enriched and invigorated New York theater. Presented here is the very best Chicago currently has to offer.