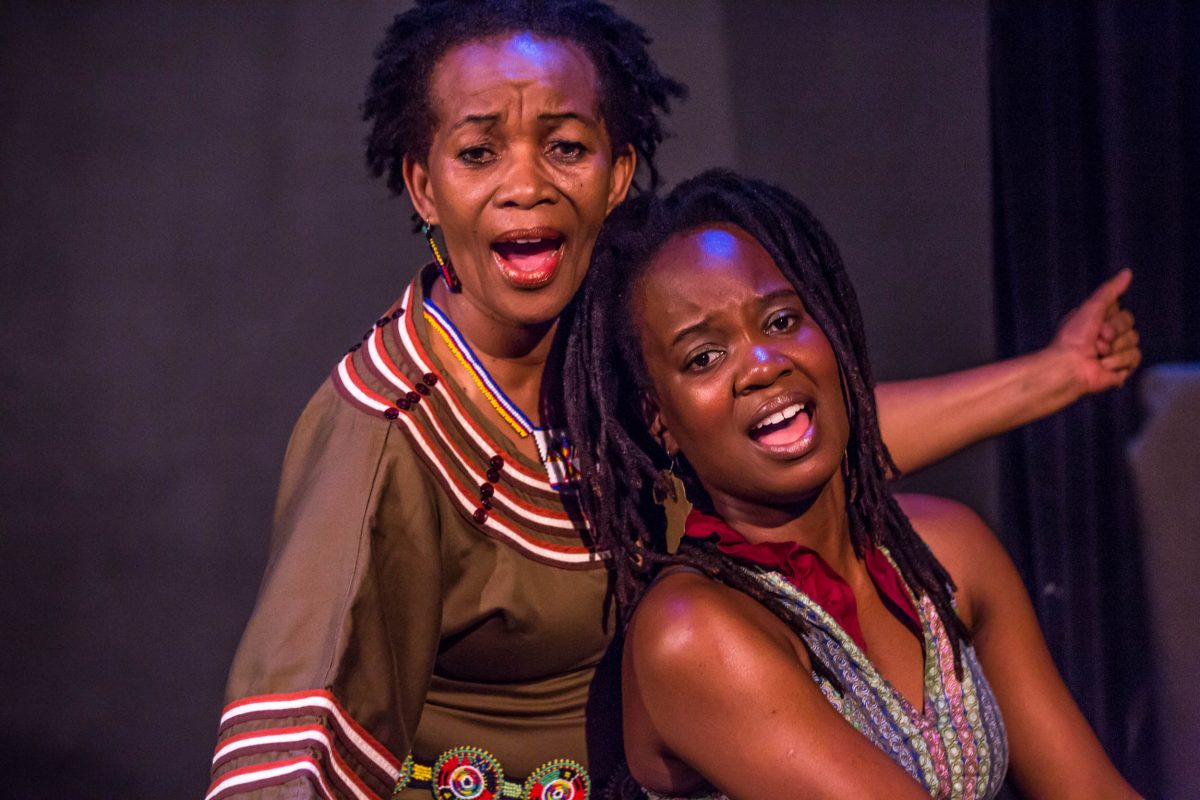 NEW YORK—When two vibrant women take stage at off-Broadway’s intimate Playroom Theater, one senses we’re in for an intriguing and unique evening in the theater.

As it turns out, the two gifted African women, Thuli Dumakude and Tanyaradzwa Tawengwa, provide, without any outside help, a nuanced musical and spoken presentation of the worlds each inhabits.

They sing—with voices of extraordinary power, easily filling the theater.  They dance—the younger, Tawengwa, displaying enormous physical grace and prowess, and the ageless Dumakude presenting her own intense, magnetic style. They speak—through storytelling and personal reminiscence, of their own histories and the histories of their particular homelands.

An acknowledgment of tradition and respect for their elders permeates the presentation. South African Dumakude often refers to her grandmother’s teachings.

Tawengwa, who refers to herself as a suburban kid from Zimbabwe, tells of her grandfather who built a prestigious hotel in her country, a hotel that served as home to some major political icons. That hotel still stands.

Dumakude tells of a particularly spine-tingling incident wherein her great-grandmother and some friends encountered a lion in the forest. Instead of fleeing in fear, the group stood their ground and stared the lion down. The beast finally lost interest and simply wandered back into the forest. Does this indicate that in togetherness there is strength?

Their ethical stance is apparent, as they work as both theater artists and concerned citizens of the world.

When Dumakude tells of getting her teacher’s license, she proudly tells her grandfather she is now ready to teach. He contradicts her, telling her she now must build her own school. And he builds one himself, which still stands.

As for the musical part of the presentation, not only do the women sing, they provide their own orchestral backup. Foot stamping and rhythmically slapping their benches provides the percussion. At one point, Tawengwa, who holds a Princeton University Bachelor of Arts in music, accompanies Dumakude on the piano.

These enthusiastic, high-energy performers boast extensive theatrical and social-concern credits. Thuli Dumakude won both the Obie and U.K.’s Olivier awards for her leading role in “Poppie Nongena” some years back. In addition to New York, she repeated the role in major world capitals.

Dumakude’s theatrical awards and roles are too numerous to mention. However, according to the show’s press release, some high points of her career include her worldwide concert tours during apartheid to raise awareness regarding the plight of her fellow South Africans. Other memorable moments include her work with the late Miriam Makeba, her performance at Carnegie Hall with Ladysmith Black Mambazo, and activities honoring Nelson Mandela.

In addition, the New York City Department of Education invited her to tour schools to teach, through her music and dance, about Africa’s role in the world. She also continues to work with Broadway Cares/Equity Fights AIDS on projects that raise money to fight AIDS.

Her activities as choreographer and vocal coach for Broadway shows and dance companies are too numerous to list.

Tanyaradzwa Tawengwa, who began singing at the age of 3, has a choral background and conducted professionally at age 11. She mastered the cello when she was 13. She has released two studio albums, one a gospel album, the second a children’s album of Shona folk songs fashioned for Zimbabwean children growing up in the Diaspora.

She is a co-founder of Shona Choir NYC, which brings together Zimbabweans in the Diaspora, an example of how she has combined her art with activism.

Both these women project confidence and caring. Their ethical stance is apparent, as they work as both theater artists and concerned citizens of the world.

Their current presentation is entertaining in a very special way: It has the added attraction of showing that there is a universality to other, seemingly different, cultures.

Thus, one might conclude that Dumakude and Tawengwa are terrific ambassadors for proving that we are more alike than different. A stance to be welcomed, as our world becomes more and more constricted and needy.

Diana Barth publishes New Millennium, an arts publication. She may be contacted at DiaBarth@juno.com.