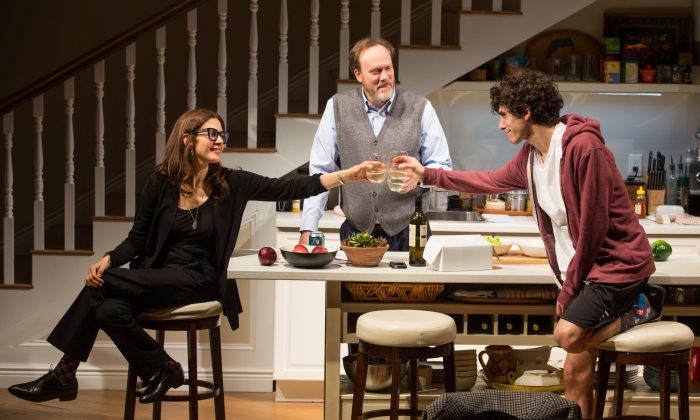 Set in a ritzy Northeastern prep school, liberal-minded Sherri Rosen-Mason (Jessica Hecht) reigns as head of admissions. Both she and her husband Bill, who is the headmaster (Andrew Garman), have worked tirelessly to promote diversity in the institution.

Enrollment by minority students has increased from a lowly percentage to a whopping 20 percent by the play’s end, but not without stepping on the toes of friends, colleagues, and classmates.

Sherri fiercely controls the elements that make progress in this area possible. She unrelentlingly nags colleague Roberta (Ann McDonough) to create the right kind of catalog, with politically correct photos that will attract students who can see people who “look like them” attending Hillcrest, as the place is called.

Sherri and Bill’s son Charlie (Ben Edelman) is a student at the school and a Yale University applicant. Charlie is raging because he’s just learned that his best friend, Perry, who is black and the son of family-friend Ginnie Peters (Sally Murphy), a white woman married to a black educator, has just been accepted into Yale. (Ginnie is miffed because her husband, with as fine credentials as Bill, has had to settle for a lower position in the pecking order of academia.)

Unfortunately, Charlie has been placed on Yale’s “waitlist.” Not only is Charlie devastated by this blow, but he’s enraged because Perry’s grades are not as good as his own. Here’s a case of affirmative action resulting in reverse discrimination.

That Sherri feels the blow as deeply as her son is reflected in a later conversation between her and Ginnie about the felt-to-be unfair decision, a conversation which will abruptly signal the end of a long friendship between the two women.

Racial issues, for which Sherry has for so long viewed herself as a kind of torchbearer, have now seemed to boomerang on her, bringing about an uncomfortable inner conflict.

Matters get worse when Charlie amazingly announces publicly that he will utilize his parents’ funding meant for his college fees to endow a foundation enabling potential minority students to attend college. Charlie himself will attend a community college.

Mutual outcry by Sherri and Bill puts an end to Charlie’s highly improper decision. It’s not his money; it’s theirs.

This provocative play, directed by Daniel Aukin, has universally fine performances, with particular praise for Jessica Hecht and the quirky Ann McDonough, who bring to life the many contradictions and uncertainties that Joshua Harmon’s play sets forth.

The title “Admissions” is double-edged: the literal academic meaning; the facing, or not facing, one’s possible biases, or flaws.

Diana Barth writes for several theater publications, including New Millennium. She may be contacted at DiaBarth99@gmail.com