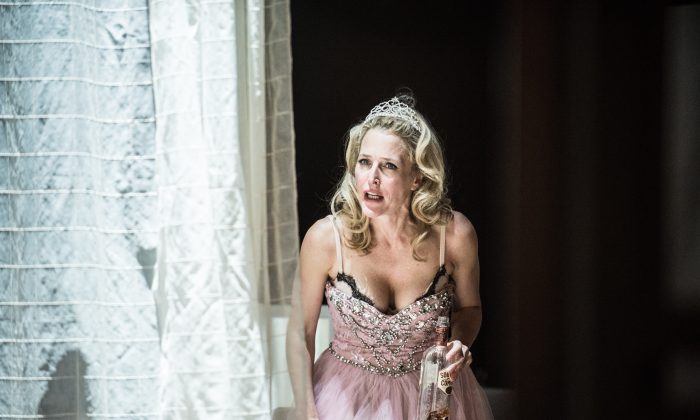 Blanche DuBois (Gillian Anderson) finds herself in a coarser world than she can deal with in “Streetcar Named Desire.” (Teddy Wolff)
Arts & Culture

A war of sensibilities
By Diana Barth

NEW YORK—One of the great qualities of the plays by Tennessee Williams is his suffusing the text with atmosphere. In the case of his “A Streetcar Named Desire,” this atmosphere is the steamy French Quarter of New Orleans.

That kind of atmosphere is missing here, but director Benedict Andrews’s production has other pluses: a terrific set of actors who bring Williams’s text to life, with a passionate performance by Gillian Anderson as Blanche. Originating in Britain’s Young Vic Company, it is now being presented at St. Ann’s Warehouse in Brooklyn.

When Blanche enters the scene, having arrived from Laurel, Mississippi, to pay a visit to her sister, Stella Kowalski (Vanessa Kirby), and Stella’s husband, Stanley (Ben Foster), things erupt like a match thrown into a haystack. It’s oil on water. A bad mix.

The genteel Blanche is taken aback by what she considers the squalor Stella’s husband has provided: only two rooms, separated by a flimsy curtain!

However, the spareness and simplicity of Magda Willi’s minimalist cream-and-white set engage the audience. Although the play is directed in the round, the revolving platform on which the action takes place enables every audience member to get a view of every event. One is thus drawn to the action.

Immediately on arrival, Blanche fortifies herself with a shot of whiskey, cadged from a kitchen cabinet. She seems to know just where such “tonics” are kept. She obviously needs something to take the edge off her anxiety, an anxiety she fights hard to conceal.

Blanche makes no bones about transmitting her disgust of Stanley to sister Stella. He is subhuman, close to the apes. Stella responds as good-naturedly as possible. But Stanley becomes immediately aware of Blanche’s attitude, and the die is cast. Blanche and Stanley are now antagonists.

Gillian Anderson’s vivid Blanche is tougher than many other interpretations.

What’s interesting about these characters is that the three of them are very sensitive and vulnerable. Even Stanley, vulgarian that he is, senses when he is being sneered at and makes plans to rectify his position. Besides, he must ensure that his woman always looks up to him—every primitive man insists on that (and even not so primitive men).

Stanley and Stella have had a terrific relationship up until the arrival of Sister Blanche, as Stanley refers to her. Her arrival has inserted a sense of reality that threatens to upset his apple cart. He has pulled Stella off those highfalutin towers of Stella’s family estate, Belle Rive, now lost to creditors. And Stella has loved it. Mr. Macho mustn’t lose ground in the familial struggle.

Although Stanley has a powerful male strength at his disposal, Blanche is a wily adversary. She manages to keep her ego intact, at least in the beginning. She preens, taking hot baths in the sweltering weather because they soothe her, and flounces about in delicate finery (excellent costumes by Victoria Behr).

Stanley is part of a group of four who get together to play poker. The poker scenes sizzle with male dominance. However, one of the four, Mitch (Corey Johnson), has a sensitivity that is appealing to Blanche.

Is there a possibility that the two lonely people will get together? In one tender scene between them, she cries out movingly, “Sometimes—there’s God—so quickly.”

But Stanley’s machinations ensure that nothing good can come for the vulnerable Blanche. He has uncovered events in her background that rule out happiness for this wounded soul whose past weaknesses and errors come to haunt and defeat her.

Do the Stanleys of the world always win out?

In a powerful last scene, Blanche is led out by a state doctor and nurse, who will see that she is incarcerated, for her last vestiges of sanity have abandoned her. Particularly moving is how she is urged to acceptance of her fate by the gentleness and respect with which the doctor addresses her. For finally she can utter: “I have always depended on the kindness of strangers.”

Is “Streetcar” a story of survival of the fittest? Do the Stanleys of the world always win out? Stella is pregnant and gives birth late in the play. The infant’s blue blanket indicates that it’s a boy. How will that boy grow up? Will he have any of Stella’s basic gentility about him, or will he be one of the poker playing set?

There’s a powerful physical attraction between Stanley and Stella. But in addition to the purely physical, did she unconsciously sense that Stanley represented the life force as opposed to the many elements of death in Blanche’s story?

Gillian Anderson’s vivid Blanche is tougher than many other interpretations, making her downfall all the more extreme and meaningful as she gradually disintegrates from a together Southern woman to a sad shadow of her former self.

Ben Foster’s Stanley struts like a proud rooster throughout, but was for my taste a bit too one-note. Vanessa Kirby’s Stella is very sexy and thus very appropriate for a young woman whose head is turned by the possibility of manly support and the pleasure he offers.

Diana Barth writes for various publications, including New Millennium. She may be contacted at diabarth@juno.com