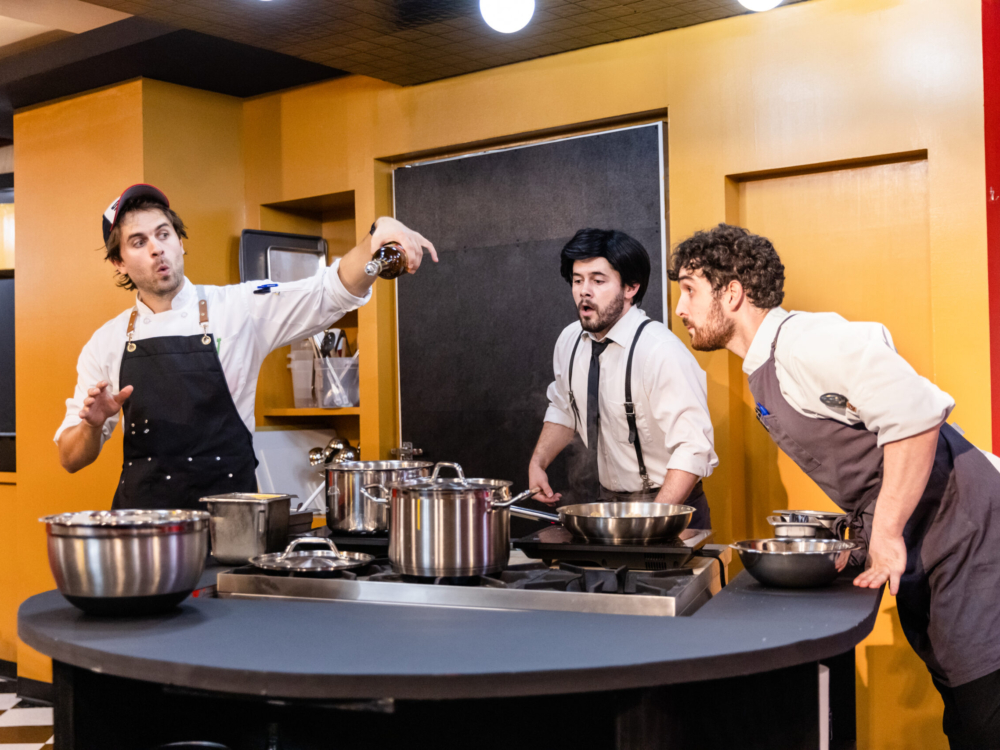 A scene from the farce "A Recipe for Disaster." (Courtesy of Kyle Flubacker)
Performing Arts

Theater Review: ‘A Recipe for Disaster’

CHICAGO—For regular theatergoers, Windy City Playhouse’s aptly named “A Recipe for Disaster” may not be what they’re accustomed to. The production lacks the stage and auditorium of a typical theater. Instead it’s a live immersive experience that takes place in Petterino’s banquet space in downtown Chicago. It’s a logical location for a presentation that takes place in a restaurant.

The show revolves around a catastrophic evening in which a hot new eatery is hosting some prominent social movers and shakers, and everything that could go wrong goes wrong. The restaurant, named the Contumacious Pig (the dictionary definition of “Contumacious” means “stubborn or willfully disobedient to authority), has become popular for its pork delicacies. So, of course, we know there’s going to be problems with the main pig course. Indeed, a pig arrives from Amazon, but it does not have a USDA stamp of approval, which will not go well with a health inspector.

That, however, is just the beginning of the problems that unfold. The chef has called in sick, the sous chef is a nervous wreck, and since a health inspector drops in for a surprise visit, the non-USDA pig has to be hidden. Furthermore, there is lots of screaming, sounds of pots and pans banged and dropped, waiters running after a rat scurrying across the tile floor, food that has to be recalled, waiters yelling at each other, fire spewing flames in the kitchen, fights that break out between employees, a waitress who tries to seduce the owner, and a cook who doesn’t know how to cook.  It’s all part of the laugh-filled disaster that could happen to any restaurant trying to impress food critics.

The show begins as guests walk down a carpet-cushioned staircase into a bar-like area in which guests are offered drinks and the host prepares them for a zany evening. After moments of watching as an athletic waiter (Daniel Trinidad) delivers some comic moments trying to hide the pig so that no one will notice it isn’t USDA stamped, guests are ushered into the main room of the restaurant.

The small room that accommodates only 30 people, designed by William Boles, features colorful tables and chairs that reminds one of a Sesame Street set. Once everyone is seated, the hard-working ensemble (Kierra Bunch, Carley Cornelius, Emma Jo Boyden, Ian Maryfield, Alex Morales, Ben Page, Daniel Trinidad, and Ryan Reilly) rush through the 90-minute farce with breakneck speed and lots of tomfoolery.

Since the show is the brainchild of prominent chef Rick Bayless, with assistance from playwrights Carl Menninger and Amy Rubenstein, choice morsels of food are served between scenes of the comic action. While waiting in the lobby for the performance to begin, patrons are served roasted dates wrapped around gorgonzola cheese as an appetizer, and when in the dining room their food service is announced with a gong. The small bites include an herb pasta with crab and artichokes, tastings of three wines, and a dessert treat of chocolate cake filled with an avocado chocolate mousse and tequila mango.

There’s nothing deep, serious, or philosophical here. It’s just a lighthearted romp through the hilarious travails of a restaurant trying to survive through a difficult night.  While the show is a welcome break from the grave problems taking place in the real world, it does present some problems.

Directed by David H. Bell, “A Recipe for Disaster” lacks a strong focus and that makes for confusion. As actors perform all over the place in different areas of the space, if you’re sitting on one side of the room, you won’t know what’s going on in the other side. Depending on where you are seated (in seats that lack any back support), you might get a different experience than someone seated somewhere else. Indeed, the production lacks a cohesive presentation, so that by its finalé, patrons are still sitting at their tables not knowing whether the show is finished.

Moreover, not only is “A Recipe for Disaster” a madcap over-the-top farce, but so too are the tickets. While the price of admission provides for small portions of food and some wine samplings, the price of $90–$130 per person may be, even in our inflationary time, a bit over-the-top.

It could be that the show’s producers felt that since Chef Bayless is such a celebrity, his food fare should also come with a celebrity price. 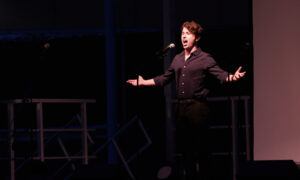 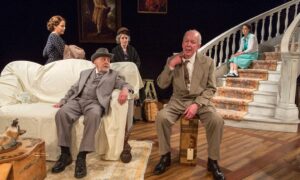 Performing ArtsBy Judd Hollander
Online-Theater Review of ‘A Picture of Autumn’: Do We Prefer Security or Something New?
05-16-2021
sharecomments 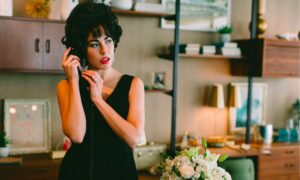