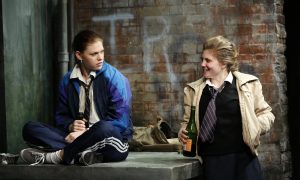 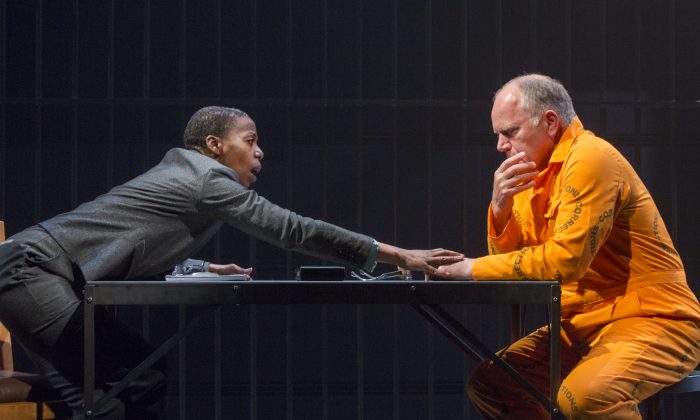 Theater Review: ‘A Human Being Died That Night’

BROOKLYN, N.Y.—When South African writer Nicholas Wright came across Pumla Gobodo-Madikizela’s book “A Human Being Died That Night” in a Charing Cross Road bookshop in London, he determined to adapt it into a play.

The result is the 80-minute offering currently enveloping viewers at BAM, having been imported from the Fugard Theatre in South Africa by producer Eric Abraham. It is directed by Jonathan Munby.

The silent Prison Guard is portrayed by Motell Foster.

Known as Prime Evil, de Kock has been sentenced to serve two life sentences plus 212 years for “political crimes.”

Gobodo-Madikizela is to interview de Kock to determine what makes him tick: Is he so different from ordinary folk; does he have a propensity for evil that caused him to so enthusiastically perform his duties of murderer?

De Kock insists he has been made a scapegoat.
As a member of the Truth and Reconciliation Commission (TRC), Gobodo-Madikizela has ready access to de Kock, who is only too willing to present his side of the story.

Claiming that the appellation of Prime Evil is unfair, de Kock insists he only followed orders and was but a cog in the wheel of apartheid rage. White South Africans’ desire to be protected from the black majority perpetuated the rage.

He speaks of requesting to apologize to the widows of three black policemen for whose deaths he had been responsible. According to him, the women genuinely forgave him because it would have been more painful to carry rage in their hearts for the rest of their lives.

The incident intrigues Gobodo-Madikizela, as it directly speaks to the issues of forgiveness and reconciliation that are central to her research.

De Kock recounts incidents of the cruelest kind of torture, bringing prisoners to near death, then reviving them at the last moment. If they persistently refused to cooperate, they were finally shot.

De Kock ultimately admits to Gobodo-Madikizela that his character may have had an element that made violence more attractive to him than to some others. But he is quick to assert that this would never have come to the fore had not others, the leaders, seen this quality and taken advantage of it.

How guilty are killer de Kock and those exhibiting similar behavior?
Gobodo-Madikizela comments that violence had possibly become an addiction for him. When she asked how he saw his role in the scheme of apartheid, he replies, “as a crusader.”

It was clear that de Kock doted on praise for “a job well done” and expressed rage when after a particularly painful “job” (the one noted in the play’s title), instead of being praised by his superior, he was reviled. The man refused to shake de Kock’s hand as “there was blood on it.”

This is de Kock’s highest emotional point in the play. He demands that this superior officer and others like him be brought to justice for refusing to admit their involvement in the most heinous crimes. Again, de Kock insists he has been made a scapegoat.

Although initially attired in a bright orange prison jumpsuit and with feet chained, in a later scene de Kock is free of the chains and dressed more normally. He reports that the 212-year sentence had been written off, but the two life sentences were still in place.

A program note indicates that in January 2015, the South African Justice Minister announced that de Kock had been granted parole.

Although the play (and its wonderful actors) is intense and often very moving, still one discerns the similarity between de Kock’s situation and that of Nazi war criminals: They were only following orders; they were cogs in a larger wheel.

When will society and the political and military elite decide how to deal with such a rationale? How guilty are de Kock and those exhibiting similar behavior? And how should they be punished? Execution, imprisonment, or reconciliation?

The play poses unanswered, and possibly unanswerable, questions. Indeed, the very last line is to the effect that there is still a lot about each other that the two participants never found out.

Playwright Wright comments in the introduction to the program notes that de Kock’s lines are “drawn partly from Gobodo-Madikizela’s book, partly from recordings she made of her interviews with him and partly from the records of Truth and Reconciliation hearings.” Plus, some dialogue is invented by Wright.

Theater Review: ‘The Belle of Belfast’
To my mind, there are points in the play where Gobodo-Madikizela seems too sympathetic toward de Kock, lacking the neutral and objective stance expected from psychologists.

But to be fair, how can a theatrical presentation be expected to propound the absolute Truth?

Perhaps it’s enough that this play depicts an ugly period in history that we should be reminded of. It also hints that such terrible things may happen again, and indeed already have, in various parts of the world.

And let us not forget very recent episodes of police violence throughout our own United States.

“A Human Being Died That Night” provides a passionate theatrical experience and much food for thought.

Diana Barth publishes New Millennium, an arts publication. She may be contacted at DiaBarth@Juno.com