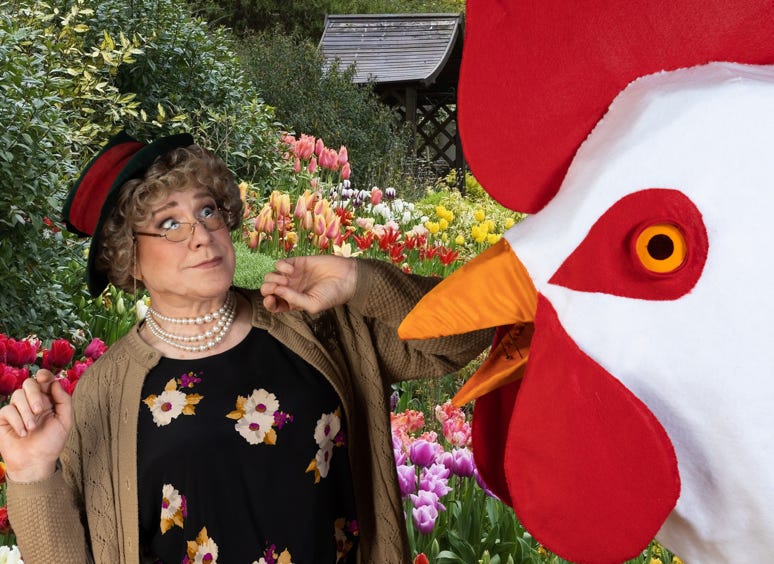 Too many chickens counted; not enough hatched
BY Betty Mohr TIMEJune 27, 2022 PRINT

CHICAGO—Miss Marple, a fictional character in many of Agatha Christie’s novels, is an elderly sleuth with inquisitive nature whom some might call a busybody. She also has an instinctive ability to connect casual comments (which no one else notices) to murder, as well as a talent for connecting the dots of a past event to a present crime.

English actress Margaret Rutherford played Miss Marple in a series of light comedies on film, which Christie was said to have found disappointing.  One doesn’t have to stretch too far to guess at what Christie would have thought of “A Fine Feathered Murder: A Miss Marbled Mystery.” It is supposedly a spoof of Christie’s sleuth by Hell in a Handbag Productions in Chicago.

While the concept of lampooning the amateur detective who attracts murder wherever she goes might have made for an intriguing theatrical escapade, the production is so sophomorically silly that it isn’t funny. Indeed, it is heavy-handed farce when a more subtle, witty approach would have made the play so much more interesting.

Under director Cheryl Snodgrass’s stagecraft, the show is limited by an abundance of excessive and exaggerated performances. The actors (Ed Jones, Caitlin Jackson, David Cerda, Shane Roberie, Tyler Anthony Smith, Michael Hampton, Sydney Genco, Barbara Figgins, Danne W. Taylor, Ben Stacy, Elizabeth Rude, Coco Sho-Nell, Maria Stephens) are so over-the-top that they come across as cardboard cartoons. They go out of their way to ham it up in order to convince the audience that they’re hilarious.

The story, conceived by playwright and artistic director David Cerda, revolves around the murder of Lord Reginald Fowler, who, it is discovered, has been having an affair behind his wife’s back.

He is said to have choked to death, but was it an accident or murder? Was his wife, Lady Violetta Fowler, who knew her husband was having an affair, the murderer? Or was it the Butler who had a secret family past? Or was it the maid who wanted revenge for an insult? Or was it the son who hated his father?

Of course, Miss Marpled will solve the mystery because of her uncanny ability to see into the suspects’ inner thoughts and secret motivations.

The suspects come together for the annual Fine Feathered Ball at the Fowler Estate, England’s largest poultry farm.  They’re celebrating the poultry farm and they dance and flap their arms as though they’re birds.

The poultry metaphors really become tiresome: One of the characters clucks, crows, pecks at the floor, and walks like a chicken; a black bird puppet (by Jabberwocky Marionettes) shows up as does a gigantic white chicken-like creature that stands outside the windows of the Fowler house and peers in. It looks like one of the Macy parade balloons.

The fake wigs designed by Keith Ryan, the costuming by Beth Laske-Miller and Bill Morey (in which feathers festoon every piece of clothing worn by the ensemble) comes across as ridiculous. Add to that, the layered set design by Pamela L. Parker, which looks as though it’s been glued together, doesn’t help the show’s production values.

Perhaps most importantly, while the premier work is supposed to center on Miss Marpled, she is overshadowed by so many crazy characters that the story veers away from her to the suspects. Indeed, it doesn’t take long before Miss Marpled disappears into the background.

If Agatha Christie had been in the audience watching the show it’s doubtful that she would have been laughing. It’s also doubtful that fans of the great crime novelist would find the play amusing.

By the time the curtain comes down on “A Fine Feathered Murder: A Miss Marbled Mystery” we’ve lost interest in whether Miss Marpled will solve the crime or not.